When I went to Origins 2005 I met a fellow game designer, Craig Zipse.

Craig Zipse is the man behind the Kenzer & Company game The Great Space Race.

I've been keeping in touch with him ever since then and we have some plans to colaborate on a game design at some point in the future.

Catching him in a good mood he agreed to an interview.

Mr. Zipse, or can I call you Craig? You entered the board game world this year with an amazing game, "The Great Space Race" that has gotten great reviews and a PDF-based expansion. Could you tell my readers, briefly, what inspired you to create this game?

The inspiration came mainly from some whimsical drawings I created for my daughter. I had toyed with a similarly themed game prior to the drawings and when the drawings came about, it just got me going down that path once again.

You had another game, "The Great Space Drag Race," that was a precursor to this one, can you tell us anything about what you learned about the industry when you tried to market that game?

That game consisted of a very limited production run. For me, it was a good, if very limited, introduction to the market. I got some amazing insight on production costs and sales figures from some very experienced people. It was a great experience.

How did you end up with Kenzer & Company?

The first company that considered the game ultimately opted to pass on it. Kenzer was the next company I decided to release it to for review. They loved it and made an offer right away.

If you had a time machine, is there anything you would change about GSR before it went to press? 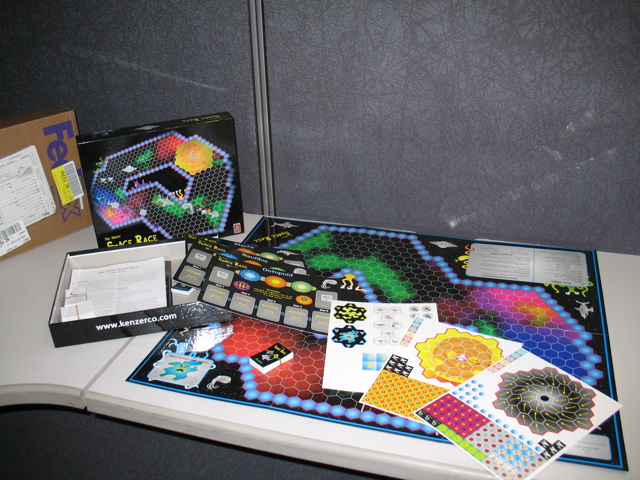 Oh definitely - just look at the errata! Aside from that, probably not. I can certainly think of things I think are imperfect about the game, but it was ready to set sail. Now that is out there, it is what it is.

How has the fan reaction been to GSR for you? Do you find people buying you drinks at conventions?

Fan reaction? Hahaha - not quite. At this point in my career as a game designer I am still the drink buyer.

I was reading that a certain gaming magazine may be putting GSR in it's top 100 games of the year list? Can you tell us anything about that?

Yes. It looks like Games Magazine has decided to list the Space Race on the list this year. I can't tell you how glad that makes me! As a kid, my sister and I would pour over every issue of Games that came out. I always enjoyed reading their selections each year, so the fact I have a game that made the list means a lot.

Can you tell us anything about more expansions for the game being released? Perhaps different tracks or new ships?

I am currently working on an expansion for Kenzer that includes both a new track and new ships. However, until it is reviewed and approved by the Kenzer crew, I cannot say for certain what will actually be in the final version. My goal is to make a shorter, faster track that uses the same system.

Do you have any non-GSR games in development that you can talk about? Definitely. I've been working on 2 games in particular over the last couple of years - Lab Rats and Turtle Soup. Both are coming along well, but TS is ready to be released for review (hopefully before the end of the year). In addition, I have an ambitious space trading game and a new race game in the mix. The race game is very strong and I will be running it at GenCon '07 for certain.

Some of the readers may not know this but, you are also a well established cartographer, having done work for Kenzer & Company in the past. Who else have you done cartography work for?

Pretty much everyone. I started out with TSR just before they sold out to Wizards. Naturally, I then worked for Wizards, Hasbro and Paizo as well mainly in support of Dungeon magazine. I've also worked with ICE, West End, Sovereign Press and Monkey God among others. I've got maps all over the place!

Do you have any words of wisdom for the budding game designers of the world?

Geez, not sure here. I still feel like a budding designer myself! A few things:

1) Playtest with strangers and take their criticism in stride.

3) Remember that while not everyone is going to like your game, your goal should be that most who play it enjoy it.

You can see more of Craig Zipse's work by going to his website www.craigzipse.com

You can also post question in the comment area below and Craig can try and answer them.