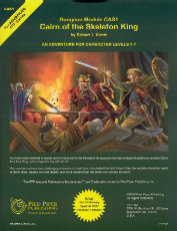 If you have ever played Advanced Dungeons and Dragons the name of Robert J. Kuntz is known to you. Recently, Robert J. Kuntz formed a new company, Pied Piper Publishing, to print new adventures for "Advanced FRP Games."

Many years ago, Creations Unlimited, Inc. published several works by Robert J. Kuntz. These works used an abbreviation set which allowed gamers a quick and easy way of incorporating them into their game system of choice. That is what is meant by "Advanced FRP Games" on the cover.

This system does not go any deeper than it has to and with a little bit of work you can quickly convert the adventure to AD&D, D&D or even HackMaster!

This article is going to look at the first adventure published by Pied Piper Publishing, CAS1: Cairn of the Skeleton King for character levels 4-7.

You have been directed to stamp out the rising evil in the kingdom! Its source is the foul undead inhabiting an ancient cairn. And their King, whom legends say will not die.

This module contains two challenging scenarios in one! If you can defeat this hold of evil, then the secrets of another realm of terror arise, equally evil and deadly, and more ancient than the lands you venture beneath!

The adventure is written by Robert J. Kuntz and edited by Lance Hawvermale. The cover art is provided by Jim Holloway with interior art done by Jim Holloway and Jason Braun. Cartography work is done by Lorne Marshall.

This adventure is the first in a series. The second adventure, Tower of Blood, should be released soon.

Pied Piper Publishing is using an interesting model to release these adventures. They are using a "sponsorship" model.

What this means is that they are pre-selling copies to the public to help finance the production. There are multiple levels of sponsorship and those who choose to sponsor a product will see their names printed in the adventure on a special "Friends of Pied Piper Publishing" page.

Incidentally, I was only able to afford a single sponsorship so my name falls under that category. Higher level sponsorships received special certificates with the copies of the adventure.

The adventure weighs in at 48 pages and has the detached cover with maps reminiscent of the old days of AD&D. Each copy is signed and numbered by the author and printed in a limited quantity. The cover price is $14.95

The cover and maps are very well done. The printed part of the adventure, however, is not as good. It's not a case of typos or blatant errors in the text but rather a feeling that you are reading an adventure that was designed as a PDF and then printed out.

I asked the publishers about this problem and they assured me it was a printer error that was beyond their control. The subsequent adventures in this series should not have this problem.

The artwork on the cover is excellent. Landing Holloway as a cover artist makes this adventure "look" like an old school dungeon module!

The adventure credits two artists (Jim Holloway and Jason Braun) for the interior artwork but none of the pieces have the artist's name attached to them and all but one piece "look" like the work of Holloway. Due to the printing problems described earlier, the interior artwork does not look as good as it should.

The pieces themselves do blend in well with the text and fit the overall theme of the adventure.

Once begun, the adventure is linear. This is to be expected in a dungeon crawl as room A leads to room B and so on. The second adventure in the module is not linear and the PCs have far more leeway in how they choose to tackle things.

Now, linear adventures are not always bad and this one is quite good. I do not want to give anything away to the potential player of this adventure so I will not elaborate on events that will occur. With that said there are a few areas where the linear nature of the adventure can be tested but it is far better for the players if they follow the flow of the adventure rather than trying to carve their own path.

Think of it as linear in the sense that in room D is a clue to room F and that by avoiding room D to get to room F quicker will only make things more difficult.

I like CAS1: Cairn of the Skeleton King. I'm looking forward to the release of CAS2: Tower of Blood!

As an old school gamer I appreciate the feel of the adventure, it reminds me of the adventures TSR used to put out prior to the release of AD&D2E and the removal of demons from the Monster Manual.

The plot of the adventure is well thought out and makes sense, this is not just some dungeon full of monsters with no rhyme or reason! You will not find a tribe of bugbears next to a tribe of goblins who both share the same egress from their lairs. Instead you will find a dungeon ecology that makes sense... well, makes sense in a fantasy world where dragons live and breathe that is!

If you are a fan of old school gaming I highly suggest you try and pick up a copy of this adventure. I also suggest you sponsor the rest of the series to insure you get them as soon as they are released.

You can try and purchase this adventure from Noble Knight Games or you can go directly to Pied Piper Publishing and order it there as well as sign up for future sponsorships!