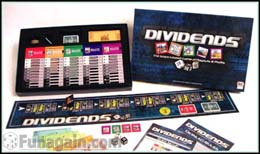 In discussions regarding games that accommodate eight players most people just advocate splitting up into two four-player groups. There are just very few games that accommodate more than six players that aren't party games. Any game, therefore, that advertises that it can handle more than seven players always catches my attention. Dividends (Fun Factory Games, 2005 - Nikki Lim) claimed to handle two to twelve players! Twelve! Now, the highest I've played with thus far is eight players, and although I think twelve is possible, it seems like it would be an extremely ferocious game.

Dividends is a fairly simple game, where players buy and sell stock and collect the dividends from the stock they own. It plays only mediocre with four or less players, but is rather cutthroat and enjoyable with five or more. Game play is very quick, so even with eight players, the game went pretty quickly; and the outcome was in doubt until the end. If all you have are four players, I wouldn't recommend the game; there are much better games about stocks (Shark, Acquire). But if you have groups that are seven or more, then this game is an excellent one - because it demonstrates how a crowded market works.

A long, thin board is placed on the table with a marker placed at one end of it. This board is basically a game track, showing five years split into five phases, and then three more phases before game end. There is also space for a pile of "Influence" cards, shuffled and placed face down, and a stack of player turn discs. (numbered "1", "2", etc. - to the number of players in the game.) The main focus of the game takes place in the plastic insert that comes with the box. There are five companies - each with a different color and name - each with ten shares each. Each share has a price associated with it; the first share of a company is $1000, with each succeeding share costing $200 more than the previous. Next to each company is a row of holes showing the dividends shares from that company pay off - starting from $0 to $450, increasing by $50. The dividend track is split into three different colored sections: $0 through $100 is black, $150 through $300 is gray, and $350 through $450 is white. A metal peg is placed in the $200 position of each company and a "Major Shareholder" tile is placed in the slot above the ten shares of the company. Each player is given $4000, and the remainder of the money is placed aside in the bank. Four event tiles are shuffled and placed in the game box - face down. The first year is ready to begin.

The marker on the game track is moved one space for each phase, showing the progression of the game. The game is split into five years, each made up of five phases.
In the first phase, one player rolls a die for each company. There are three dice: black, gray, and white. The die rolled must match the color of the section where the company's dividend pin is located. The dividend pin is then moved the number shown on the die: (the black die's range is +1 to +3, the gray die's range is -3 to +3, and the white die's range is -1 to -3).

The next phase is the bidding phase. Starting with the #1 player disc, players bid for turn order. Bidding is free-form and continues until all but one player drops out. That player takes the turn disc, and bidding starts on the next numbered disc until player turn order has been established. Phase three then begins with each player taking actions on their turn.

On a player's turn, they can buy stock certificates or sell them - as many as they can, if they will. Each stock certificate costs the price of the number next to it; players will buy the cheapest stock available from a company. When selling a stock, a player sells it for the price next to the highest empty slot at that company. Players must also either play influence cards or discard them from their hand; they may not keep them. (On the first turn, players have no influence cards.) Influence cards either increase or decrease the dividend pegs in different companies. Some cards are for specific companies, while others are "wild" and can be played for any company.

The fourth phase each year is the Payout phase. Each player receives money equal to the dividend number of each company times the number of shares they own in that company. Also, if a player is a Major Shareholder in one or more companies, they receive one influence card for each share of those companies.

The fifth phase involves one player randomly drawing an event tile from the box. Depending on the tile drawn, all players must follow the action, then the tile is replaced.
- Force Sell: All players must sell their most expensive share.
- Buy In: All players must buy the cheapest share available.
- Placement Offer: All players may buy one share at half price from the company with the most unsold shares.
- Technical Correction: All players must sell one share at half price of the company that has the most sold shares (if possible).
After the event tile is resolved, all turn tokens are returned to the board, and the next year begins. After the fifth year, players have three more rounds to play influence cards, receive dividends, and sell all of their stock certificates back to the bank. At this point the player with the most money is the winner!

1.) Components: This is the first game I own from a game company - Fun Factory Games - based in Singapore, and I must admit I'm impressed with the component quality. Having the plastic insert double as the game board is a nifty device. The only problem with it is that it makes the game annoying to transport - as it's very easy for everything to fall out of the slots. All the shares and Major Shareholder tiles were of good quality - each a different color with a different picture on them, making them easy to differentiate. The money was your typical playing money for board games, but they did include plastic sheaths, which helped make it easy to store and sort. The cards were very thick, and even passed "the toddler test of doom". The dice have printing on them - which means that it can rub off - but other than that, I was very pleased with the whole package. The game board wasn't necessary but really facilitated the speed of the game - remembering what year and what phase we were in.

2.) Rules: The game came with a quick setup sheet and quick rules, which are extremely easy; I was able to figure out almost the entire game simply from reading them. A rather tall eight-page book, with full color illustrations and examples, was included - the "detailed rules", and everything was laid out clearly - especially exactly what the four different event tiles did. I found the game easy to teach - teenagers picked up on it quite easily - although I wasn't sure about their strategies.

3.) Players: There are fewer companies available with two or three players, but I don't think it matters much; the game simply isn't much fun with that few players. It's too simple to get the majority in one company, and then hope that company does well - it's rather random. With more players, there's a lot of negotiation, auctions are tighter, and one player cannot hog the shares in one company.

4.) Auctions: Auctioning off turn order is a BIG deal in this game. It's extremely critical to go early, as later players will find that their shares cost much more than those who go early, and they will fall behind quickly. At the same time, if a player bids too much to go first, then they might not have enough money to buy all the shares they need.

5.) Strategy: On the first turn, a player can only buy three shares at the most. Should they buy only shares from one company - pretty much sealing their majority there, but at the same time, put all their eggs in one basket? Or should they buy from several companies, spreading out. If one player buys a lot of shares from one company, it's very simple for the other players to attack their company in a concentrated way. Players can make deals, agreeing not to affect the share price of other companies - and the more players, the more interesting this gets!

6.) Major Shareholder: Owning the majority in a company is important, as it gives a player the all important influence cards. The more of these cards a player gets, the more options they have, and the more power they wield in negotiations. I liked this aspect of the game, and it helped offset the wild swings some companies had when rolling the dice for dividends. Speaking of dividends, they really weren't where the major bucks in the game came from - rather knowing when to buy and sell stock has been the reason for the victories I've seen.

7.) Fun Factor: In a game with a large number of players, auctions are fun, negotiations are fun and the game is just very enjoyable to play. In a game with fewer players, everything seems a lot more lucky, and it's easier for one player to hole up in one company, putting all their hope in that one company; and then luckily winning the game because of it. With larger groups, it's practically impossible for this to happen.

If you are looking for a game that can be played with large groups - and as a teacher, I quite often am - then Dividends is a solid choice. Party games are great and fit a variety of situations; but sometimes I want to play something different, and Dividends offers that up. I would NOT recommend it for less than five, however; but with five or more, the interaction is great, the time level of the game is short, and it has good replayability. The game is quite simple; it teaches the stock market (on a VERY basic level) and allows a lot of players. I'm pleased to have it, because it fills a place in my game collection that very few other games (if any) fill - a financial game accommodating up to twelve players.