I'm going to take a few minutes to review this game and give you my opinion as to how good the game is. I will also go over a few points that make the game different than the Pokemon games that have been released thus far.

You take on the role of a Pokemon Ranger in the Fiore Region. Unlike in previous games there are no Pokeballs in this game. Instead you will be using a stylus to temporarily capture Pokemon.

As a low level Pokemon Ranger you will have access to stylus that gets more powerful as you gain in experience. Your Ranger level will slowly rise as you complete missions. As your level increases you will be able to capture more Pokemon and use more powerful Poke assist powers.

The game has a linear story path that you must complete before the game is considered complete.

You will be able to capture and interact with more than 200 Pokemon. Because you are a ranger and not a trainer, after you use a Pokemon's power you must release it.

This is what I really like about Pokemon Ranger; it's more in tune with the idea of Pokemon as you are not simply building a battle squad but are instead befriending Pokemon who then assist you and leave.

No Pokeballs in this game, instead you use the stylus on the DS touch screen to capture Pokemon.

I have to admit, when I first heard about that I thought it was crazy! Draw a line around a Pokemon until they get dizzy and then you capture them?

Have no fear, the system does work and it works well.

When you walk into a wild Pokemon (or an antagonist battle) you go into capture mode. Yes, evn battles are a capture as you are freeing the Pokemon from the bad guys!

You have to draw a line around the Pokemon a set number of times that varies by the power of the Pokemon. i.e. a weak Pokemon such as Magnamite can be captured with as few as three circles while a more powerful Pokemon such as Salamence may take 15+ circles to capture!

Electric Pokemon can be used to recharge your stylus. 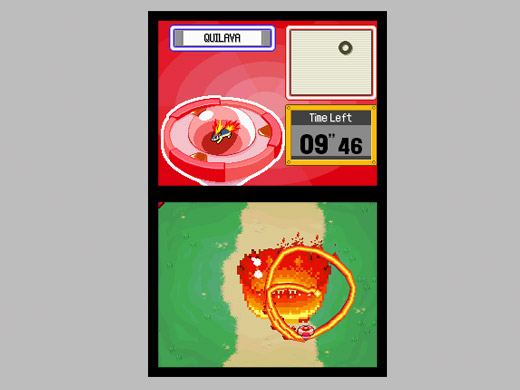 Sometimes a Pokemon is so powerful that you need a little bit of help to capture them, this is where the Poke Assist powers come in.

When capturing a Pokemon you can use the power of any Pokemon on your team to help.

For example: IF you were trying to capture a water Pokemon you could use a grass Pokemon to assist you. Because of the type advantage it's Poke Assist power would be even more potent!

Once you use a Pokemon in this manner it is set free, unless it is your main Pokemon Plusle or Minun.

As well as the Poke Assist powers many Pokemon also have Field Moves.

These range from basic things such as fire Pokemon being able to burn down obstacles and others having cut to knock down fences.

Unlike the prior offering of Pokemon Mystery Dungeon, I find Pokemon Ranger to be a very enjoyable game. It's not overly difficult and there is nothing random about it.

It is enjoable to capture the Pokemon with the stylus and knowing that they will be set free after you use them it forces you to better think out your strategies.

Even though the storyline is linear I have no problem with it. I have not yet completed the game but there is something after that called "Ranger Net" which will allow you to take on missions to capture legendary Pokemon such as Kyogre, Groudon and even Mew!

If you are looking for something to while away the hours until April when Pokemon Diamond and Pearl are released then you should pick this game up, it is worth it.

The only bad thing about this game is the lack of a multi-player aspect. Then again, I don't know how you would have multi-player in this game!

Ranger Net is now available to me and... I now have the power to take Pokemon out of their natural environments! This means I can catch a Pokemon in the woods and then go to the jungle and they will not have to leave me.