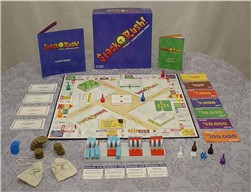 I'm always on the lookout for games that help teach the intricacies of the stock market for my Consumer Math class at school. Stock Rush! A Week on Wall Street (Stock Rush, Inc., 2005 - Morris Kyrollos) is a game that was designed with this specific purpose in mind. It's a game that uses the California Gold Rush as a backdrop and somehow mixes that with modern stocks. The game uses the time-old "Roll-and-move" system, as players move their pawns around the board, attempting to buy low and sell high.

From an educational standpoint, the game is rather well done - if simplified a tremendous amount from the actual stock market. Every teenager that I've played the game with also enjoys it, and they don't mind the rapid changes and luck involved with the game. However, I feel that for adults, the game simply is too complicated and yet too simple at the same time. It's basically a roll-and-move game, with fluctuating stock market prices, and players seek to gain the most money. The game isn't poorly designed - and I would recommend it for youngsters or teaching purposes - just not for the local gaming group.

Let me mention some features of the game, including my thoughts:

1.) Companies: There are four companies in the game, in which stock can be bought and sold. Each company has a name, but is more associated with the first letter of the name - "A" (Ameythyst), "B" (Beryl), "C" (Carnelian), and "D" (Diamond). The price of the shares of each company starts at $50 but can change rapidly during the course of the game. Players have the opportunity, after landing on certain spaces, to buy shares in these companies and sell them later on in the game. When buying or selling stocks, players should buy or sell them in one of the three denominations included in the game - 100 shares, 1000 shares, or 10000 shares. This certainly makes the game easier to figure out the prices of the stocks; although in my classes, we use a calculator to figure out the actual prices, allowing players to buy stocks in multiples of 100. It's pretty difficult to tell (normally) which company will do well, but the basic principle holds sure through the game - buy low, sell high! Players can also see spaces on the board in which different companies go up or down in price and plan their buying accordingly, depending on how many players might land on those spaces soon.

2.) Rules: The rules of the game are remarkably simple when taken at a basic value. Players simply roll dice and move their piece that many spaces, following the conditions of the space they land on. Of course, there are a variety of spaces which players can land on; and although it is easy to remember what they are after the first time landing on them, I still had to look every space up in a seventeen page rule book. A mini-booklet, composed of ten pages, acts as a reference guide, but I would have preferred some sort of reference card for each player to use during the game. Kids understand the game fairly easily, although some of the more complicated rules, such as Market rumors and news, aren't too intuitive, although they make excellent teaching opportunities. Advanced rules are included in the game, allowing players to sell short, although this adds a bit of paperwork to the game, as players trade on margin and have to keep track of everything they plan to do. I normally play with the basic rules and use computer stock games to simulate selling short.

3.) Components: The market board is probably the most noticeable component in the game; and it is rather nice. It's basically a flip board made entirely out of plastic with three digit numbers for each of the four companies. It comes apart with a bit of jerking, and the plastic numbers don't always flip. Still, it looks good, and the rubber bottom gives it a feel of quality - and keeps it from sliding around the table. The board is also well designed, although it has a bit of a "busy" look; and the shares and money are also okay, although they are printed on one side of laminated paper. Other components in the game include golden plastic chips of various sizes (as gold nuggets), a golden bell in a cloth bag (the mother lode), plastic pawns, cards, dice, and pegs that fit in holes on the board. There's a LOT of stuff included with the game; but everything fits inside a large square box, although I would highly recommend plastic bags.

4.) Gold: Part of the game centers on digging and finding gold, although I find this a bit jarring when compared to the rest of the theme, especially considering how lucky this part of the game is. When a player lands on a Gold mine space, they roll a die, and on an even number - take that many gold nuggets, and on an odd - pay a $1000 mining fees. Considering that gold nuggets only pay back $100 x the roll of one twelve-sided die, which comes out to an average of $1800, I really don't see the point, as the profit is a bit low. A Gold Rush is even more disconcerting. When a player lands on this space, all players advance to the nearest gold mine (there is one on each side of the board) and enter into the middle of the board. Each player rolls the die, and the player with the highest number gets a Gold Strike (can be exchanged later for $1000 x the roll of one die). However, if two or more players roll the same number, they are trapped in the cave and must stay there until they either play a special card, are freed by another player landing on a gold mine space, or they all roll the same number on their turns. This sounds rather easy, but a player can sit out of several turns trapped in the mine - and it's pretty annoying.

5.) Mother Lode: If a player draws one half of a Gold Map from the deck of "Bulls & Bears" cards, and they and another player are both part of a Gold Rush, they each find a Mother Lode token, which can be exchanged for $10,000 x the roll of a die. This is an awesome amount of money, but in all my games, I haven't seen it happen, as it's a bit hard to get both halves of the map. Still, the idea that it CAN happen does add excitement to the game.

6.) 1D12: The game uses a twelve sided die instead of two six-sided dice, which I believe adds too much to the randomness of the game. If you look at the numbers rolled on two six-sided dice, you would find the graph more conducive to several game factors - such as escaping from the gold mine. In my games, I've replaced the die.

7.) Franchises: There are four spaces on the board that allow a player to buy a "franchise" from one of the four stock companies, which means that their price fluctuates. Whenever another player then lands on that franchise, they must "buy good" and pay $100 x the roll of a die - receiving a goods chip. Later on, if the player lands on a "Garage Sale" space, they can sell their goods for hopefully a higher price. The landing on and paying gives the game a slight Monopoly feel, and it certainly is a good thing to own a Franchise.

8.) Bulls & Bears: When a player lands on one of these spaces, they draw the top card of the deck and follow the instructions on them. Many of them are random events, but some of them are Call and Put Options, which allow players to either buy shares for $50 each or sell them for $100 each. These cards are excellent ones to pick up - and help players out - both by teaching and by winning the game.

9.) News and Rumors: During the game, a Company or Market Rumor might occur, which will change information about the market as a whole, or one of the four companies. It's possible to dispel these rumors or confirm them as actual news. This is one of the best parts of the game; it teaches the kids the dangers of buying on basis of a rumor and how supposed "facts" might just not be that.

10.) Ending: The game can end in several ways - market collapse (in which all companies go bankrupt), a cave-in which traps all the players, or elimination of all players but one. Since these three things rarely happen, it's much more likely that the game ends at the end of the trading week. What this means is that whenever a player lands on the "Opening Bell" space, which is the starting space, a peg moves forward one day, AND all players immediately move their pawns to that space. This gives the game a bit of a "timed" feel and keeps it from going on too long.

11.) Educational and Fun Factor: If you look back over my review, you'll find that I pointed out some things that I did not like about the game. However, whenever I played the game with kids, none of these things bothered them; they simply had a good time buying and selling on the stock market and landing on spaces. The gold rushes, which drove me nuts, they found tremendously enjoyable. Having luck play such a huge role also bothered me, but the kids loved it. And because they enjoyed it so much, I found that the game worked very well as an educational one - one which taught kids some of the basic facts of the stock market.

That, my friends, is what I would recommend Stock Rush for - teaching children or teenagers about the stock market. There's a bit too much luck and randomness for someone into heavy gaming; but kids don't care about that so much, and there is a LOT of information packed into this game. With nice components, clear rules (although a LOT of them), and an educational value, Stock Rush might not be your first pick for the local gaming group (or even your 100th), but it is an excellent tool for the classroom, on a rudimentary level.

BoardGameGeek entry for Stock Rush! A Week on Wall Street