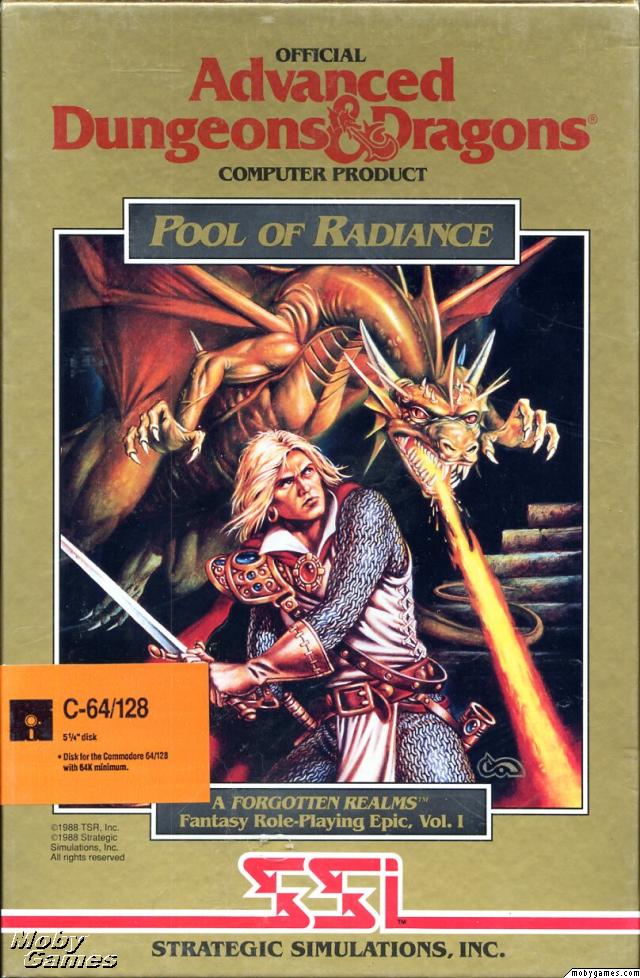 Back in 1988 SSI released the first in a series of Advanced Dungeons & Dragons computer games. Pool of Radiance was the first of these games and it is the one I'm going to talk about today.

It all started in 1985 when TSR saw the success of the Ultima series of computer games and decided they wanted in on the action. Several popular gaming companies were in talks with TSR for the license but SSI pulled it off in part due to their experience with making computerized wargaming software.

SSI signed the license agreement in 1987 and Pool of Radiance was on the market in 1988 for several different systems:

I had the C64 version back in 1988 and I played the hell out of it. I later acquired the DOS version and I still have it today.

One of the biggest problems with the C64 version was that it came on four double-sided 5 1/4 disks. Because of this you were often told to swap disks once you left a given area of the game. It would then typically take a minute for the new area to load. You also needed one extra disk for saving data.

When it comes to RPG gaming on a computer Pool of Radiance set the standard. The game world was huge and contained countless hours of enjoyment. between the quests in the game, and the unlimited nature of the wandering monster encounters in the wilderness, it was very easy to max out your characters before you completed the game. Luckily, once you completed the game you could export your characters to the next game. Except for their items. Yeah, it sucked to collect all that cool stuff and not have it carry over into the next game.

One trick you could use was to equip a character with the Gauntlets of Ogre Power before transferring them to the next game. The item would vanish but their 18/00 strength would remain!

It was also fairly easy to hack the save files with a hex editor or even a program known as Pooledit (a DOS-based saved-game editor written by Stephen Oulton). Since we did not have the Internet in 1988 most folks just tried blindly editing the save file to see what would happen.

Even though the game was based on the AD&D system not all of the classes or magic items were available in the game. They were all in the program as I decompiled it in later years and found the references.

Because this came out in the early days of computer gaming they inserted a form of copyright protection using a code wheel. The game would start and ask you to line up two runes and read the word on one of three paths. There were only about six or seven answers that the game ever took so losing the wheel was not a big deal as you could just keep loading the game until you guessed it correctly. There was also a journal with stories and maps. when there was a lot of information to convey the game would point you to read a journal entry. To keep players from just reading the journal the designers placed a good number of false entries in the book. Those who read the journal cover to cover would find themselves reading a bunch of false entries with no way of knowing which were true.

The game begins with you making a party of up to six first level characters. There is a small sprite editor which you use to differentiate your characters. If you don't you may not recognize who is who on the battlefield.

After creating your characters you head to the Phlan town council building to read the proclamations and receive missions to complete. The first you will likely undertake is that of clearing out the slums.

Most of the battles in the slums are easy but before you complete the mission you have to defeat several trolls. Trolls regenerate even after you destroy them. you have to either be quick or make sure a party member stands on the spot where the troll died. If you don't you will find yourself staring at fully restored troll a few rounds after you defeat it!

That is right, fully restored! the trolls do not pop-up when they get a couple of hit points back, instead they wait until they are fully restored to arise for battle. Don't be surprised if this battle takes a few tries.

After you gain a few levels you will begin to get more important missions and even leave the city for some adventures in the wild. This is where the difficulty begins to ramp up. Some of the "random" encounters you face in the wild are tougher than the planned encounters. Also, the game engine is designed to modify the encounter based on the strength of your party. What this means in simple terms is that if you cheat and max out the ability scores on your characters you will face tougher battles.

Your ultimate goal is to free Phlan from all the monsters and defeat their boss; Tyranthraxus. There are many missions you can undertake from the town council but the only required ones are the ones that clear the way for you to get to Valjevo Castle to defeat the boss.

Pool of Radiance is a long game. The graphics are no where near what you expect to see today (it's a 20 year old game) but the game play is solid. The wilderness areas of the game incorporate a sandbox style of environment that was many years ahead of its time and (sadly) not duplicated in later Gold Box games.

If you need GPU intensive graphics to help immerse yourself into a game than this game is not for you. If, however, game play is more important to you than gaming chrome this is a game for you.

Pool of Radiance was followed by Curse of the Azure Bonds, Secret of the Silver Blades and Pools of Darkness. There was also a game called Hilsfar That falls in either before or during Azure Bonds. Unlike the other games Hilsfar is character specific and you only use one character at a time. The game play is also different based on which class of character you play as.

If you want to try it out why not download it and try it out?