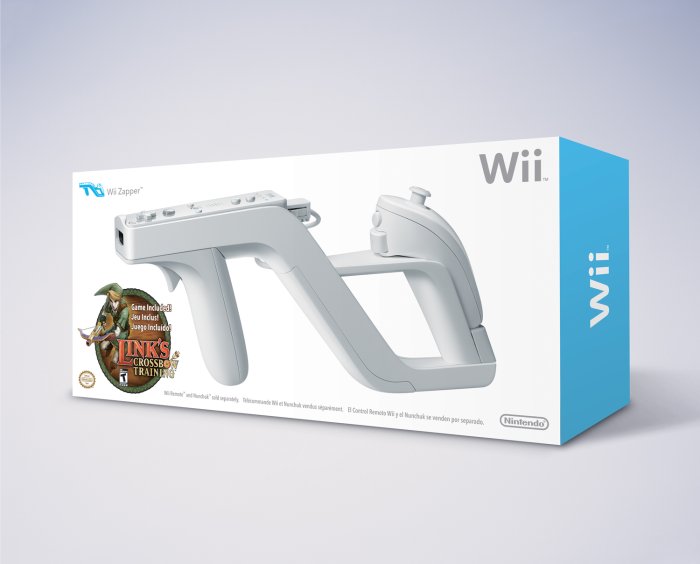 Nintendo has now officialy unveiled their Wii Zapper and yes, it is not much more than glorified Wii-remote and nunchuk holder. Lucky for us they will also be including a game with this plastic contraption; Link's Crossbow Training!

According to Nintendo the included game is going to be something along the lines of Duck Hunt with Link shooting at things. There are even more games planned for future release that will use the Wii-Zapper. All of this makes me wonder if this accessory is really even needed.

Future Games that will use the Wii Zapper

One alarming bit in the Nintendo press release is where they say players can share the Wii-Zapper for multi-player fun. Share? If sharing is involved that means it is not multi-player in the sense so many of us love but multi-player the way it used to be.

Remember when you were a kid playing Super Mario Brothers in "multi-player" mode? After a while of waiting for your brother to die so you could get a turn you would start being obnoxious and do anything in your power to help them "accidently" die? Yeah, I'm getting the same feeling here.

After looking at the picture I can safely say that this is not really a good item. Yes there is a trigger coming down that pushes the "B" button for you but I can play just as well in the normal two-fisted mode that I have been using up until now. By locking the controller in place like this I see Wii-Zapper games falling into a cookie-cutter mold.

Let's face it, when word came out that the (banned) game Man Hunt was going to allow you to use the Wii-Remote and Nunchuk as a garotte to kill people with it just sounded cool! If the controllers are stuck in this holder you will be limiting the ability to use the controllers. Just look at the Zelda game on the Wii. In that game you can shake the Wii-Remote to attack with your sword AND you can shake the Nunchuk to do the spin attack. I see no such inovation with the Wii-Zapper.

If I have not made it obvious yet I don't see myself buying this accessory. Well, unless the Link game is so good and I can't buy it used so let's take a look at the included game.

Link's Crossbow Training contains three basic game styles: target shooting, defender and ranger. There are 27 stages in total, and these categories represent only generally how each individual stage operates. Each stage's goal is to earn the highest score possible within the time limit. All rounds can be played with multiple players: Players pass the Wii Zapper around and then play one at a time and compete for the high score.

Target Shooting: In target-shooting rounds, players shoot bull's-eyes as they pop up on the screen. In early stages, targets are stationary. As the game difficulty increases in later levels, the targets move. Hitting the center of the bull's-eye nets more points, and hitting targets in succession without missing earns combo multipliers. Link can aim anywhere on the screen.

Defender: In defender rounds, players remain stationary but can look and aim in all directions - sometimes even in a full 360 degrees - by aiming off screen. Hordes of enemies assault Link, and he must fight them off. These battles have a great deal of variety, from fighting off skeletons in a desert to defending a wagon from boar-riding Bokoblins.

Ranger: In ranger rounds, players can move throughout the level using the control stick and aim anywhere they want by aiming the Wii Zapper wherever they want to look. In these missions, Link storms enemy encampments, fights his way through a forest and seeks out his foes while exploring the environments.

Yeah... OK... Is this going to be another Wii Play? I don't know because the Wii-Zapper is not a Wii-Remote (the sole reason for buying Wii Play early on was the scarcity of Wii-Remotes).

I have not heard anything about a price point for this item but it best be in the $19.99 or less range for me to even consider it. Even at that low price I will likely just skip this one.

Hey Nintendo, publish some games!!! Push the release date of Super smash Brothers Brawl or Mario Galaxy up a bit!!!