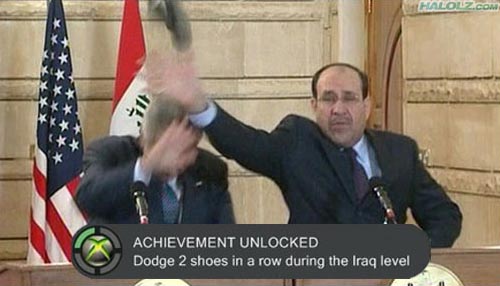 This past week I took the time to play through the PlayStation 3 launch title Resistance: Fall of Man. While I've had the game for a few months I didn't play it that much once I realized it came out before Sony added Trophies (Achievements) to their games.

For some reason the lack of a constant stream of gratifying trophies held me back from enjoying this game. In some ways I find the lack of achievements is what keeps me away from my Wii (can't be the game selection, right?) Resistance: Fall of Man does have an in-game award system that is like a trophy system but it is hidden in the extra content area of the game and the points awarded are used to unlock bonus content such as concept drawings.

What I found, as I played through the game, is that a part of me had been using story-based awards to gauge how far into the game I had progressed. As I would see the number of unearned story awards dwindle I would feel closer to the end of the game. In a way I was ignoring the pacing of the game itself and using meta knowledge to track my progress.

Because this game lacked story-based awards I found myself constantly wondering if the next chapter would be the last. Couple this with the way the game adds opening and closing monologues to each chapter I never knew the game was over until the final credits ran. Not knowing what else might happen I watched all of those credits roll by and was rewarded with a final scene from the game. A final scene that had me thinking that there might be another chapter!

After playing through the game and taking some time to digest the experience I have to say that while achievements and trophies can prolong the game play of a game, story-based awards can ruin a game.

Some developers try to alleviate this problem by making story-based awards secret in nature but it only takes a few minutes of looking online to find out what those secret awards are and now all of your dramatic pacing elements have become redundant for a large swath of the gaming public. These awards act as built-in spoilers for your creation.

If it were up to me I would see story-based awards sent to the great round file in the corner office. The only ones I would like to see remain are those based on difficulty and game completion. Give me an award for beating the game and give me another for beating it based on a difficulty setting or only using a limited selection of gear (Dead Space is known for this with one award for only using the Plasma Cutter and another for beating the game on the hardest difficulty setting.)