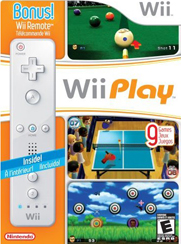 Today I purchased Wii Play and brought it home.

For those who may not know, Wii Play was the launch title for the Wii in Europe and it was released in the USA on Feb 12, 2007.

Wii Play has 9 mini-games. When you first play it you have to play the games in order as a way to learn how to use the wii-mote. All of the games on the disc are one or two player.

Wii Play also comes with a wii-mote, which has proven harder to get than Wiis!

Those are the games. Please keep in mind that though the game retails for about $50 you are getting a wii-mote in the box (retail $40) so you are only paying $10 for the game. If you already have four wii-motes... check eBay.