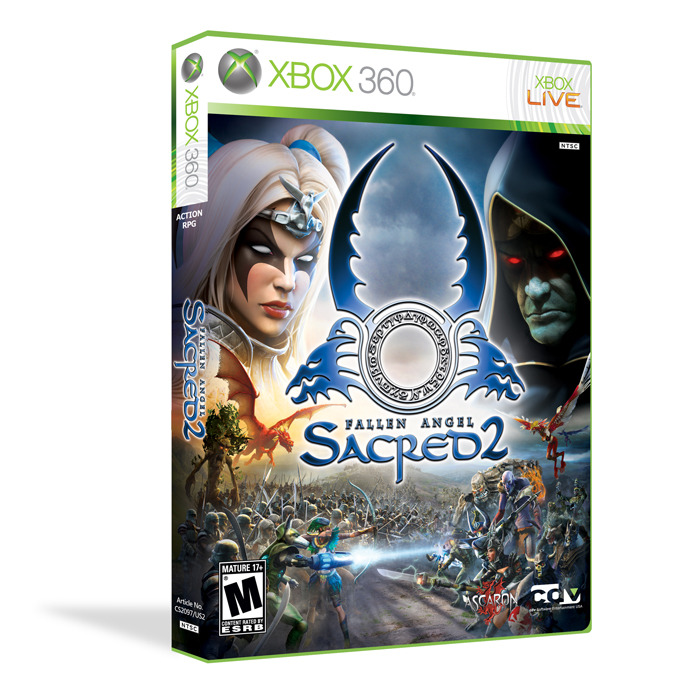 For the past week and a half I have been spending quite a bit of time playing sacred 2: Fallen Angel (Ascaron) on my Xbox360. When I first heard about the game my initial thoughts were on the line of, "oh no, not another Diablo clone!" What I have come to learn is that even though it does have some elements of the Diablo games it also has elements of one of my favorite Fantasy RPG computer games; Baldur's Gate. Yes, Sacred 2: Fallen Angel is not so much a Diablo clone as it is a game with roots in both Diablo and Baldur's Gate. So the game is not so much a clone as it is a child of those two venerable titles.

To get the basics out of the way let me start by telling you that there are six character classes to pick from and each one can be customized to a great degree as you level up. the game world is immense, huge even! If you like the sandbox style of RPG then you better bring along your shovel and crab shaped bucket because Sacred 2: Fallen Angel has more sand than you can shake a stick at! Couple this with a huge amount of sidequests (600+) and two different campaigns (light and dark) and you have a game that you can play for a very long, long, long time.

Unlike its PC counterpart the Xbox360 version of the game limits you to four players total over Xbox Live. You can also have a second player join you on the same console in a shared (not split) screen environment. Much like Diablo (and Baldur\'s Gate to a lesser degree) the game truly shines in a multi-player format. Enough with the broad overview let\'s get down to brass tacks, shall we? 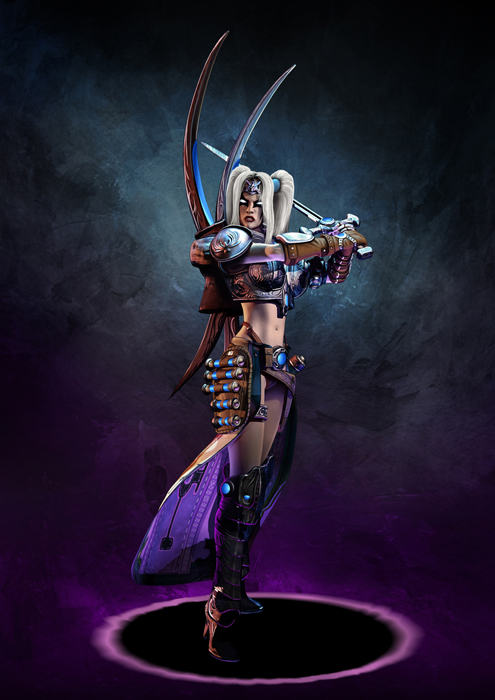 As characters advance in level (up to level 200) they gain points that they can use to add to their prime ability scores as well as skill points used to buy and increase skills. At best 14 Combat Art modification points can be earned for each grouping of Combat skills (each class has three). Each Combat Art skill can be modified/upgraded three times. When upgrading each Combat Art you will have to pick one of two options to go with. Each one is good but alters the way the Combat Art works to one degree or another. for example one option you may encounter is to make a Combat Art target more enemies for less damage or less enemies for more damage.

The Combat Arts system is a little bit confusing at first but you should quickly get the hang of it. My advice is to focus on a particular one of the three Combat Art groupings available to you and bump it up to level nine as soon as possible so that you can max out one of the individual techniques under that skill.

Unlike your traditional RPG where all thieves wear leather and all fighters wear plate Sacred 2: Fallen angel uses a piecemeal system. With this system you can mix and match armor pieces (gauntlets, vambraces, helms, etc) to create a very functional, if not exactly stylish, suit of armor.

Some items are class-restricted and will appear in a different color on the equipment screen. This goes for armor, weapons, runes, you name it. Items also have a level on them and though they can be used by a lower level character they will not be as good until you meet the level requirement.

Most armor and weapons can also be customized by visiting a blacksmith and having them forge other items you collect into your weapons and armor. In an early quest you can acquire a lava rock that a blacksmith can forge into your weapon to turn it into a fire-based weapon. This comes in very handy when dealing with undead hordes and rats. By becoming a flaming weapon it gains the ability to set enemies on fire, which causes recurring damage as they burn.

Runes can be forged into weapons or used by the character to power up their Combat Arts. There also exist Runemasters in the world who will trade runes with you.

Along with equipment comes a very interesting item; the Hero Chest. This chest appears in every major city and some minor ones. There is also a bit of DLC available that summons an imp who brings the chest to you anywhere in the world and even into a dungeon. This proves invaluable when you find yorself to full of loot to pick up anymore. Sadly the Hero Chest does have its limits and you can fill it up.

Another benefit of the Hero Chest is that the same chest (and contents) appears in every game you play. Because of this every character you create after your first will have a very nice equipment advantage. Same goes for playing online. 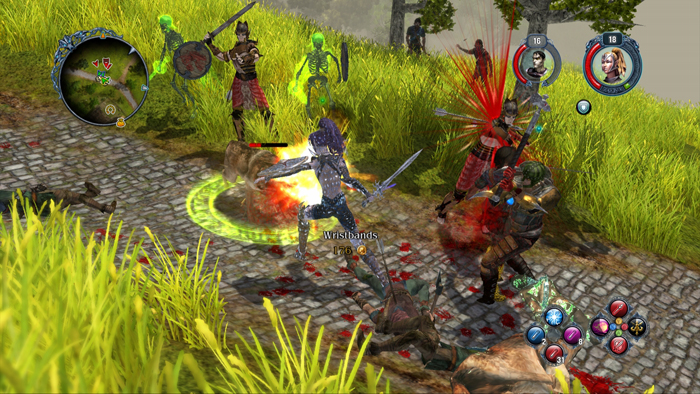 Sometimes when a game goes from the PC to the console you lose something do to the smaller amount of buttons on a controller compared to the vastness of a mouse and keyboard. This is not so in Sacred 2: Fallen Angel. By allowing the player to choose their own button bindings the creators of the game have brought the feel of mouse and keyboard to the controller.

The four buttons on the controller can each be bound to weapons or Combat Arts. However you are not simply limited to four. By using the left and right triggers you can bind up to 12 different attacks to those four buttons. Potions are bound to the control pad for easy quaffing during battle. 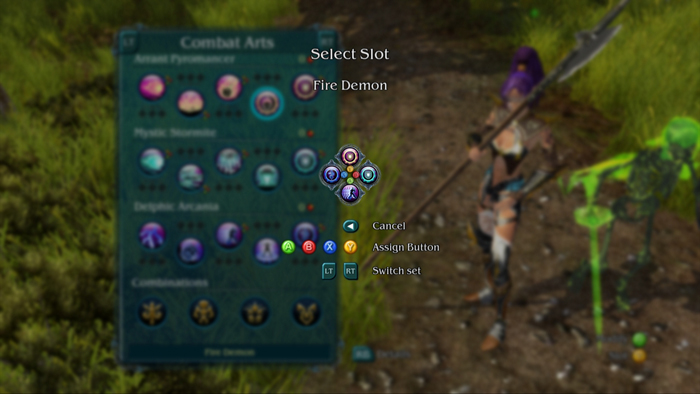 Not only can you bind weapons and Combat Arts to the buttons but you can also create combos and bind them to the buttons as well. By strategically choosing what Combat Arts to bind together you can, with one button press, you can simultaneously attack, heal and setup a defensive countermeasure in the middle of a battle. 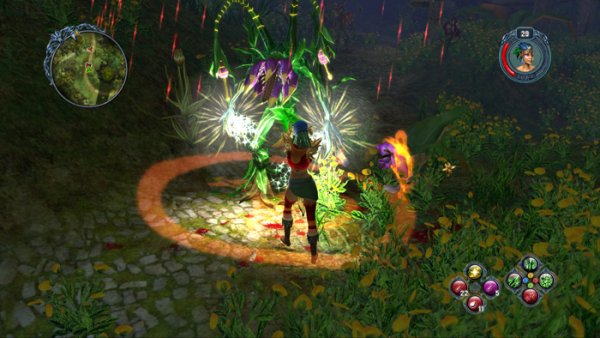 The game world is huge. I'm talking vast. It would take you hours of travel to get from one side to the other. Lucky for you the creators added in two things to make it a lot easier; portals and resurrection monuments.

The portals are fairly simple. Once you activate them you can always teleport to them no matter where in the world you are. The resurrection monuments are where you respawn when you die. They also work like the portals however only one can ever be active at a time.

Portals are not so common that you can rely on them to bounce around the world quickly. They are also not so rare so as to force you to fight your way into an area multiple times.

The dungeons you encounter do not change. They are always laid out exactly the same no matter how many times you enter them. Some might think this hurts replayability but I happen to like it.

Now we're getting down to the meat and potatoes of this game. Much like Diablo some games are fun enough single player but truly shine when you have a few friends playing alongside you, Sacred 2: Fallen Angel clearly falls into this category.

Because I do have friends I was able to test out the multi-player modes (yes, modes as in plural) before writing this review. there are several modes to choose from including a PvP mode.

For starters you have your basic two players on one console mode. The second player simply activates a second Xbox360 controller and can either use on of your characters (if they don't sign in) or create or use one of their own if they do sign in. Game play is the same as single player with both players sharing the screen. This does limit some of your strategic movement but it works well enough.

The more common mode of play is the four player cooperative mode. In this mode you and up to three friends can play together. This mode does work with the local co-op mode in that two of those friends can be on the same console.

Four player co-op is the creme de la creme of Sacred 2: Fallen Angel. Not only do you get to run around slaying monsters together (without a monthly fee other than the Live Gold fee) but you can talk smack to each other at the same time using a headset!

Because heroes in the same party can not hurt each other (friendly fire) when playing in the PvP mode no one will be in the same party. This has some negative aspects because it prevents you from fast teleporting to the location of other players. Some might consider this a bonus but if I'm gunning for you in a PvP scenrio I don't want to half to walk for hours just to find you!

When you play four player co-op you are playing a D&D style game. Grab a Shadow Warrior, High Elf, Temple Guardian and an Inquisitor or Seraphim depending on which campaign you are playing. This will give you a strong party capable of overcoming anything in the game.

Yes, this section is marked humor.

Why? Because the game is full of it! When you play Sacred 2: Fallen Angel you can't help but chuckle at some of the jokes and gags in the game.

When you encounter a cemetery be sure to read all of the gravestones. Don't be surprised if you find humorous one liners and famous quotes. One tombstone I encountered had "so long and thanks for all the fish," written on it while another simply said, "I took how much damage?"

Even the Heavy Metal band Blind Guardian makes an appearance in the game! They are responsible for the soundtrack too.

Sacred 2: Fallen Angel has a lot of humor that is geared towards gamers and that is one of things that makes this game so good.

Sacred 2: Fallen Angel is an excellent RPG for the Xbox360. We have long been waiting for a good RPG game like this to arrive and now I have to say that it is here. If you enjoyed Diablo and Baldur\'s Gate then I believe you will love Sacred 2: Fallen Angel. I wasn\'t very excited when it showed up at my door and it took me a few readings of the manual to fully understand how the game is played but now that I know I find myself thinking of excuses to sit around and play it.

Even though the game is rated M for Blood and Gore and Violence I found that you can turn off the gore and it really is not that unsuitable for the under 17 crowd. The blood and gore is very pixelated anyways.

between the main quest, numerous side quests and the sandbox nature of the game you can play this one for hours and still not fully explore the game. In fact you have to play it through once as each class to even experience all of the quests because some are class based. At $60 this one is a definite buy.

PS: When you pick it up be sure to look for me on Xbox Live, I\'m always looking for some adventuring partners.