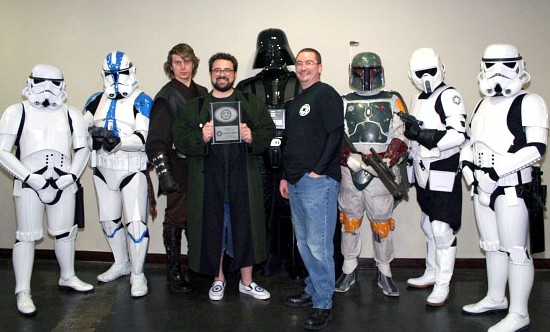 501st Legion's Connecticut Garrison made an appearance at the NYC Comic Con.

This event was a lot of fun. Many comic book artists, celebrities, and members of the 501st Legion attended this massive event.

One of the highlights of this event was being part of the induction ceremony of Kevin Smith into the 501st Legion as a "friend of the Legion"! One of our members made a short speech and we presented Mr Smith with a nice plaque, which he commented on about how our plaque was actually nicer and better quality than many of the "big" awards he had won in the past.

We spent some time with him and really had a blast. He was in awe when he saw us, especially when he saw Anakin Skywalker and Darth Vader. I think he had more questions for us than we did for him. He couldn't believe that we received NO FUNDING from anyone and that we actually made our own costumes. He even asked me as to how I made mine, so I explained how we researched the costumes, and what is involved in the "vacu-forming" process.

I, along with a few others, also escorted Mr Smith and Stan Lee (creator of Spiderman) to their cars while they left the event.