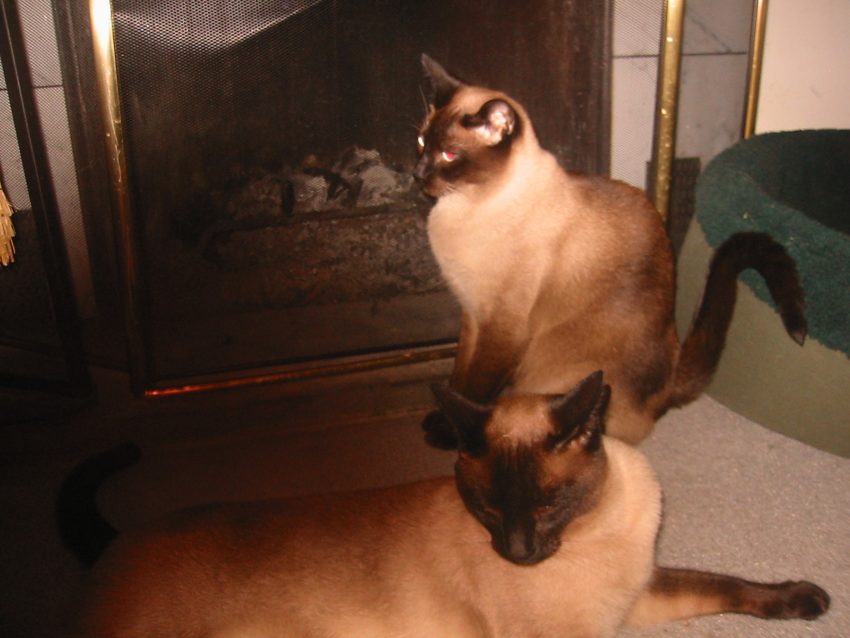 I know I mentioned this before but I'll say it again, I have six cats.

That's right, six cats! I didn't always have six cats but I do now. This story is not about all six cats, it's about the two newest cats; Kiko and Koko.

Kiko and Koko are about 6 months apart in age but came from the same breeder. Kiko has more Siamese features while Koko has the colorings, but not the sleek body of a Siamese. They are both very affectionate cats and they get along very well with each other.

Kiko, who came first, has bonded to me. That is one of the reasons we got Koko. He has certain "peculiarities" that define him as a cat:

1) He likes to sit on my shoulder.
2) He only eats "shredded" cat food.
3) He has an unusual attraction to hamsters.
4) He likes to sneak out of the house, earning him the nickname "Kiko-Sneako"
5) He never comes when called.
6) When he wants your attention, he climbs on top of the "cat cubey" and mews.
7) He only eats cat treats off of the floor. If you put them in a bowl he can't see them... Don't know why.

Koko, who has bonded to my wife is a very different cat. He does not like being held (at least not by me) and the other things I will list below:

1) He likes to sit far away from me.
2) He will eat anything.
3) He couldn't care less about hamsters.
4) He has zero interest in sneaking outside.
5) He comes when anyone makes noise.
6) When he doesn't want your attention you can't find him.
7) He enjoys tormenting all of the other cats in the house.

So, right away you can see that both cats are different in many ways. There is one thing they do like to do together, well two if you count playing "pig pile on the Byter" on cold days. Both cats love to hunt together.

They work as a team. I know it's hard to believe since most cats are solitary hunters but these two do it.

Once, I heard some angry cat noises coming from my kitchen so I looked in to see what was going on. what I saw was most interesting. Figaro was laying down on a chair while Koko was on the table above him whacking him in the head. At the same time, Kiko was on the floor below whacking him in the butt. Figaro had that "let me out of this house now" look on his face!

What is also interesting to watch is when they operate their "ambush" strategy. One of the two will go in the kitchen and start bugging another cat. The other one will be stationed in the next room behind a piece of furniture. Once the victim runs out of the kitchen the ambusher rushes out of his hiding space and tackles the running cat. They then switch positions and the ambusher becomes the instigator in the kitchen.

The most likely target is always Figaro, I think it's because he squeals a lot. They don't try this on Spyder Cat because he's too tough for them. Byter? No, she's too snugly and can't run very fast. Squirty? Yep, but Kiko is always the ambusher on that lineup.

They also chase each other across the house when other cats are not available. This usually starts in any room except the bathroom and ends in the bathroom or the hallway outside the bathroom where the cat tree is. I think they are playing some sort of "king of the mountain" game because they both charge up the cat tree but someone gets pushed off.

Another trick Kiko uses is to sit next to a cat, lick his head and then grab him in a head lock until his grip is broken. Koko uses the, lay down next to a cat, show your belly, then whack them in head as hard and fast as possible until they do something. If they run, he chases them down. If they jump on him he wrestles with them for a while.

I think Kiko learned the head-lick maneuver from Squirty. I often see Squirty walk up to Kiko, lick his head and then grab him in a fierce headlock. This is often accompanied by loud growling from Kiko and a very determined expression on Squirty's face.

When it comes to bed time, Koko jumps right in the bed as soon as he hears by belt come undone. See, as a kitten I used to play with him by moving my hand around under the covers and letting him catch it. Now his claws are longer and his grip is stronger so I only do this when protected by thick blankets. If I don't play with a little bit before I go to sleep he attacks my fingers, armpits, whatever he can reach.

Kiko is the opposite, he will only come on the bed when I am sleeping. Then he lays down just out of reach and goes to sleep. Sometimes Koko will jump him in the middle of the night and I wake up to a rolling fur ball on the end of my bed.

Figaro used to sleep with me, but Kiko put a stop to that! If Figaro is on the bed Kiko chases him off, fast! He can't chase Squirty away but Squirty spends most nights outside.

Well, that's about it for this entry. I'll post more cat stories in the future.