RockBox is an alternate firmware package for your iPod. Unlike the traditional iPod+iTunes, RockBox works with any computer that can connect to the iPod as a hard drive.

Now, you might be wondering why anyone would even want to replace the firmware on an iPod. After all the iPod "just works" and it has a very clean interface.

Well, contrary to popular belief, the iPod does not always "just work." If you check the Internet you will see a few stories where people have problems getting their iPod to work properly.

RockBox does not replace your Apple firmware. It does add a boot loader which allows you to choose to run your iPod in "Apple" mode, "disk mode" or "RockBox" mode. If you choose to run in Apple mode your iPod will work much as it has before.

I'm going to quickly go down my list of reasons for installing RockBox:

See, not everyone uses mp3. Some people prefer to use a more open audio codec.

The one thing the iPod lacks is the ability to skin the menus. Some would clearly argue that the iPod is elegant in it's simplicity. Look at the Zune, it has some degree of skinning and the interface sucks. Which would you rather have? Clean and elegant or skinable and sucky?

RockBox has found a middle ground. After you get used to navigating the menu system you will find that skinning it has no major effect on how you use it, other than personalizing your iPod that is!

You can find a large number of skins here.

3) So I can easily use the iPod with a Linux PC.

Because RockBox does not use the xml database file system that the iPod firmware uses I can just drag and drop music files onto my iPod and play them.

Because iTunes+iPod uses a db file to tell it where all the songs are you can't access your iTunes music as easily as you might want to. For one thing that area of the iPod is marked hidden and even if you un-hide it, every time you connect to iTunes it will be marked hidden again.

The other problem is that iTunes renames all of your files with names such as GYEF.mp3 and puts them in folders F00 -> F32 etc... Yeah, you can find the files but you will have no idea what is in the file until you play it! 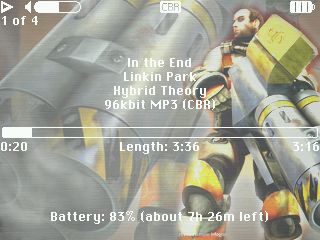 4) To get around some of the problems I have been having playing and moving media onto my iPod.

I have dealt with iTunes abject refusal to move podcasts onto my iPod.

Not anymore! The same mp3 files that would cause my iPod to crash plays perfectly fine under RockBox.

Now that I have told you the good, here comes the bad:

Because RockBox does not use the full feature set available in the iPod it can not use the battery as well as the iPod firmware can. This wouldn't be such a major issue except...

2) You can not plug it into the car charger while using it.

I have a long commute, typically 45 minutes each way, twice a day. I keep my iPod plugged into the car charger while I use it. This allows me to also use it during the work day with little to no fear of the battery running out.

RockBox goes right into disk mode if I plug in the car charger.

3) It takes more work to set things up.

Setting up playlists in iTunes is fairly simple. The iPod firmware also handles categorizing music in a very simple way. RockBox is not quite there yet.

Unless you think out your directory structure before you load anything into RockBox you will probably encounter some trouble in finding things.

I feel RockBox has made great strides but it is not quite ready yet. The software that Apple loads onto the iPod is so simple that there is almost no need to replace it. Well, except for skinning! It is funny how a company that is all about the individual and making their products your own does not allow you to skin the software on your iPod. Not even something as simple as changing the menu colors...

Oh wait, they are doing something like that with the new iPod Nanos but... you have to pay for that feature when you buy it...