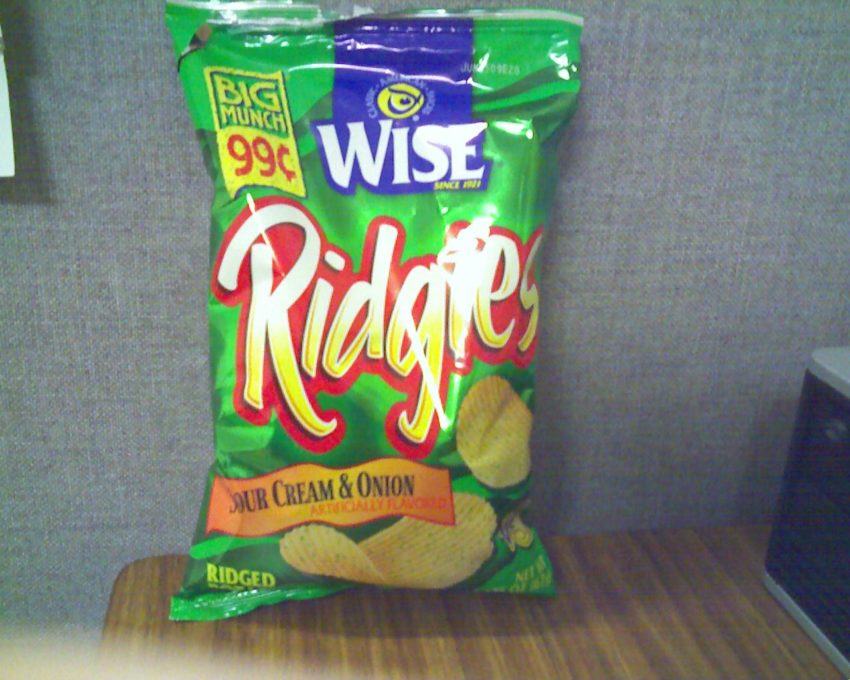 Just this afternoon I found myself with a hankering for some potato chips. It's not very often that I eat these things on account of how their grease tends to have a highly negative impact on my digestive tract. Every now and then though I just can't help myself and I succumb to the desire.

I stopped by a local convenience store to find my bag of chips and after a few minutes of perusing their selection I settled on the Ridges chips made by Wise. I think it might have been the words "Big Munch" next to the 99 cent price tag that pulled me in. I used to always buy the Cape Cod chips but I thought I might give Wise a shot at some of my hard earned cash. 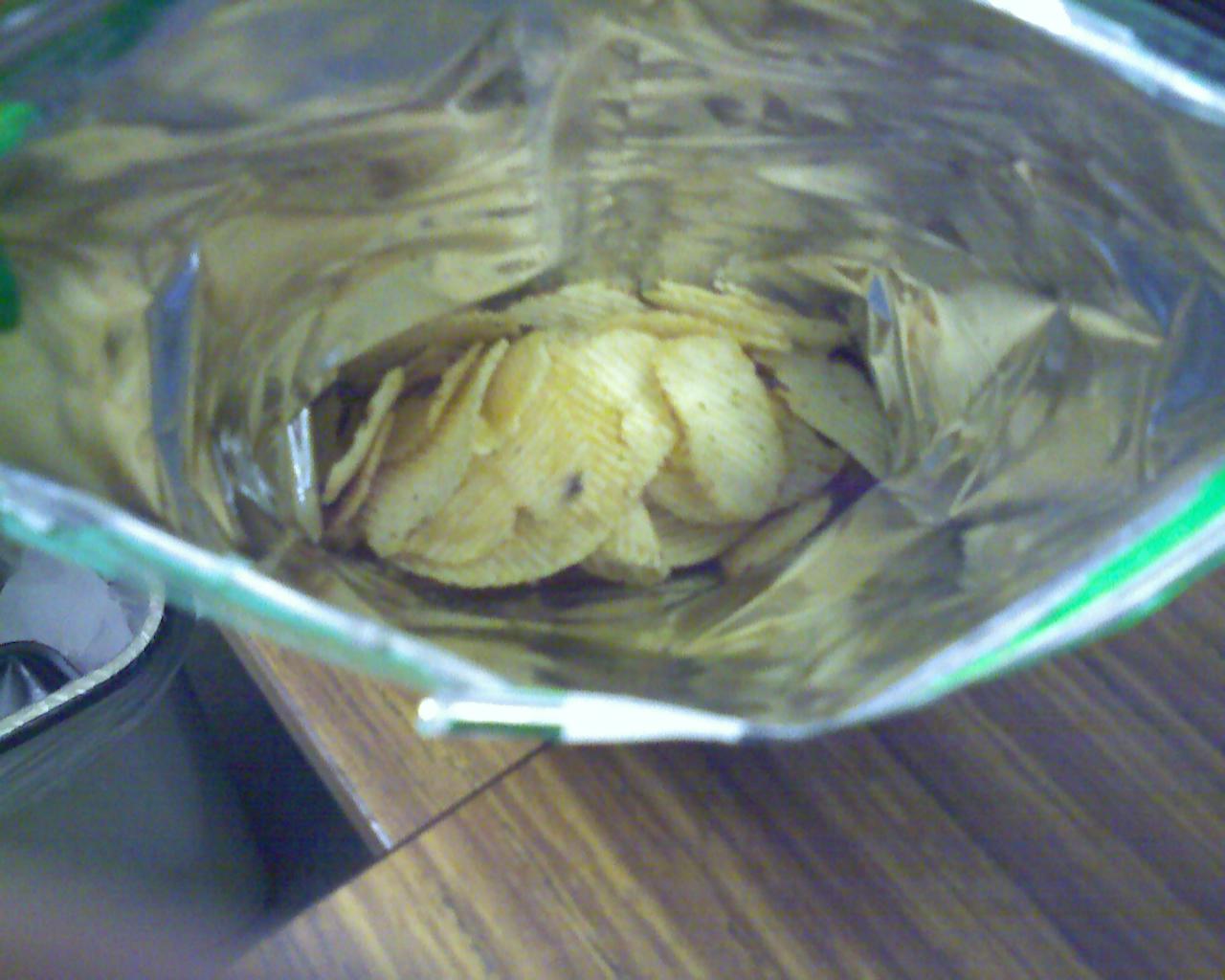 The bag was clearly larger than any other bag in its price grouping and according to the weight data it contained 2.375 oz / 67g of chips. With that said I had also forgotten that Wise chips tend to be on the heavy side when you compare them to other chips. This is due in part to them not slicing their chips as finely as some other brands are prone to do.

After returning to my office space I proceeded to pop open the back and eat. That is when I came to a rather rude discovery.

Even tough the bag was large, and the weight clearly marked, I was more than a little bit surprised to see how much of the bag was filled with air. Looking into the bag it seemed like a very long way before those chips appeared. In fact, as you can see from the pictures, the chips took up about 1/3 of the available space inside the bag! 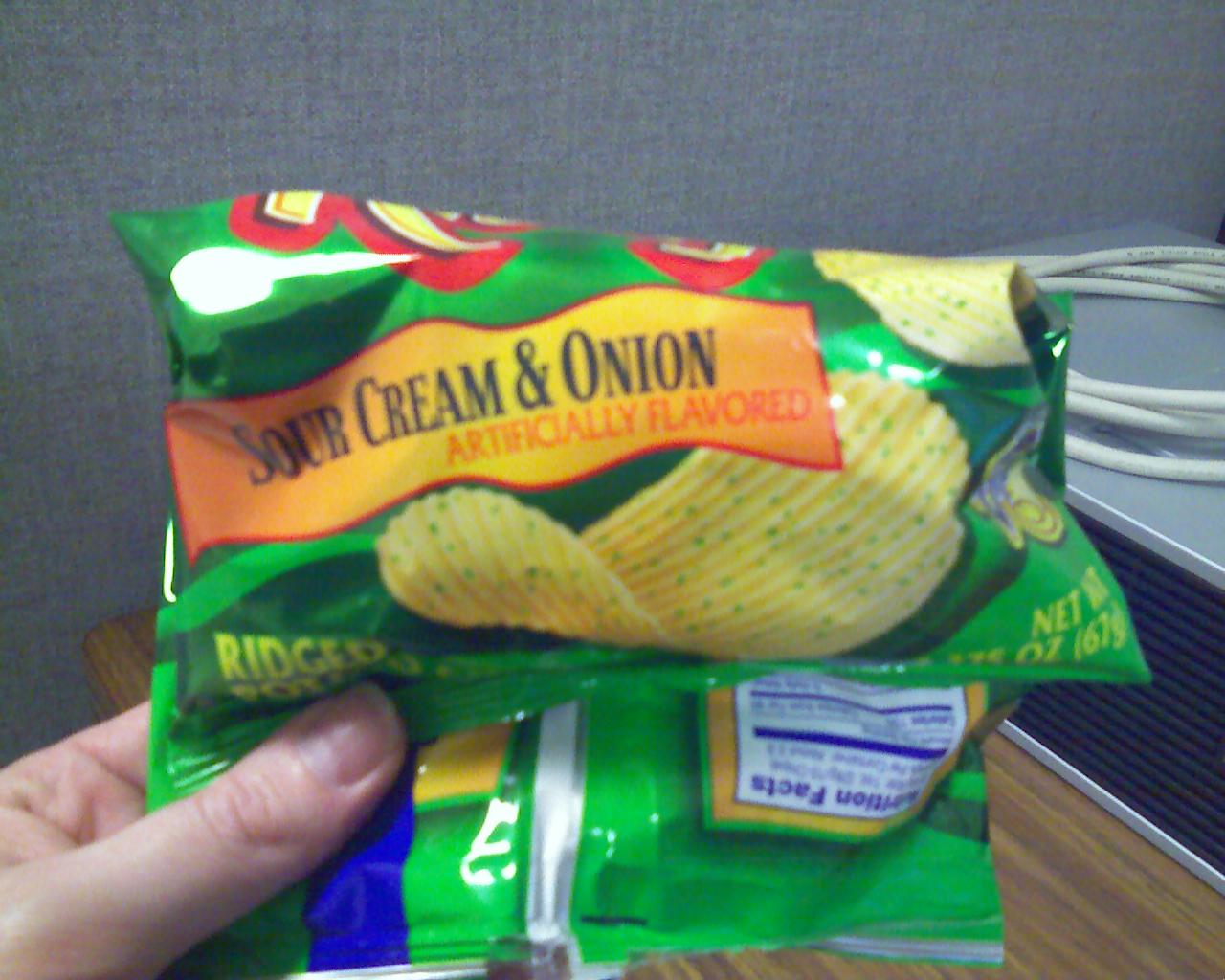 There is a lesson to be learned here and it does not only apply to chips. Whenever you go shopping it is always important to look not only at the price but also at the unit price when compared to similar items. Quality is also a very important factor but when all other things are equal I always try to use unit price as a basis for making my purchasing decision.

A few days ago I took my daughter with me to the grocery store to pick up a few items. One of her staple foods is Mac-n-Cheese. Unfortunately for us she has a preference for the SpongeBob licensed Mac-n-Cheese, which costs a little more than the basic elbow shaped product.

We do give her a weekly allowance of $5 that she is able to spend as she sees fit and she is pretty good with her own money. Seeing an opportunity for some learning I made a point of showing her the prices and unit prices of everything we purchased. She quickly caught on and when we arrived at the Mac-n-Cheese aisle she put the plain elbow variety in the cart and saved us about 25 cents per box.

When we got to the paper towel aisle things became a little bit more complicated. This happened because we had the option of buying them as single roles (most expensive), two-packs or 24-packs. As I am sure you can imagine the 24-pack was the best deal but I then had to explain to her that even though the pricing was the best it was not the best deal for us because we lack adequate storage space to keep the extra rolls. In the end we paid a little more and got the two pack.