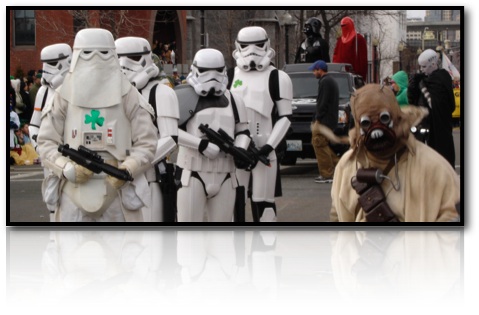 The 501st Legion, along with the Rebel Legion, will be marching in the Boston St Patrick's Day Parade.

This event will be MASSIVE! The Boston St. Patrick's Day parade is the second largest St Patty's Day Parade in the country! There are close to 50 people signed up to march and represent Star Wars for this event. Members from the 501st Legion's New England Garrison, Connecticut Garrison, Garrison Carida, the NorthEast Remnant will be there, along with members of the Rebel Legion.

Leading the parade will be led Bryan Morton (Anakin Skywalker/Darth Vader from the Rose Parade) with his detachment of troopers in tow. Periodically, 'Order 66' will be called : Vader and Obi Wan will duel, while the troopers surround and destroy the Jedi!

Behind Anakin/Vader will be groups of episode specific costumers (Episodes 1 - 6) starting with all the prequel characters, moving up to the Classic Trilogy characters , culminating in our grand finale: the Return of the Jedi /Emperor's Throne Room Float ! The Emperor's Throne Room - complete with the Emperor's throne, the large window, Lord Vader, Luke Skywalker, the Emperor, and his Royal Guards will be displayed. This float will be playing Imperial music, while a lead vehicle will be playing Anakin's music at the front of the procession.

Join the estimated 600,000 people who'll turn out for this year's 106th St. Patrick's Day Parade in South Boston. The parade steps off at 1 p.m. on Sunday, March 18, beginning at the Broadway "T" Station and ending at Andrew Square; there have been some slight modifications to the parade route this year. Your best bet for viewing the parade is to stake out a spot anywhere along Broadway--get there early. Apart for the Star Wars theme march, the three-hour parade features marching bands from throughout North America, pipe bands and other floats.
This event will be televised, though I am uncertain as to which station it will be on.