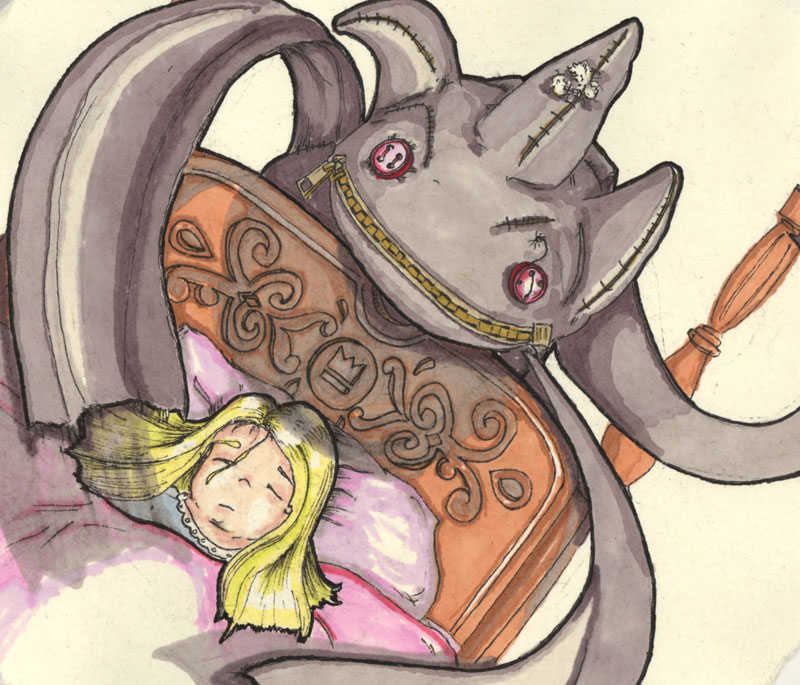 "How did I get here," thought the small stuffed toy to itself. Quickly followed by another thought, "how am I alive?"

The doll had become self-aware at some point but it could not fathom when it had happened. It had a series of thoughts and emotions that it believed were happy yet gloom and despair were creeping in. It had a vague notion of a happy child but something was clearly wrong. If the child had been happy why was it now lying in a pit of garbage?

The small doll began to move around, limping and crawling its way out of the refuse. It wasn't exactly sure where it was or where it was going but it felt it had a purpose. A purpose that had something to do with a sad child.


The doll spent several days wandering the trash dump. It was not used to being alive and it took some time for it figure out some of the basics of its new life. For starters it had to be careful of the other creatures that lived in the garbage. Poisonous creatures that wished to do it harm. Flying creatures that wanted to use its stuffing to build a nest. As its dirty sodden body crept through the safety of the night it became more and more angry.

"If the child I remember loved me than how did I end up here?" Where a confused feeling of love and loss once filled its cotton stuffed body a blackness began to creep in. A darkness that slowly changed it. Gone were the frilly clothes that once adorned its body, replaced by a general brackish gray coloring brought on by dirt and grime. It began collecting pins that it would pierce itself with whenever a mood other than anger began to enter its being.

The strange creature finally made it to the city near the trash dump, how long it had taken it was not aware for the only thing that filled this creatures spirit was spite and malice. It hid in the corners of parks and playgrounds. When it saw a toy left unattended by a child it would often sweep in and mutilate the dolls, stealing bits and pieces of them. When the children returned, and the tears began to flow, the zippered face of the ghastly creature would tighten into a smile of sorts. It would then quickly stick a long rusty needle into itself lest any happy thoughts might compete for space with the all encompassing darkness that ruled its life.

The years passed and the strange creature made the city its home, always on the lookout for the child that still lingered in the vaguest of its memories. It was on one bright and sunny day that, while hiding under a bush in the park, it spied a child that sparked a memory inside its diabolical head.

The child was close in age and looks to the child from its memory but something was off. It didn't feel right, close but not right. The creature studied the child, piercing itself with broken needles from time to time to sharpen its concentration. This extra effort soon paid off. This child was not its child but the child of the child that had thrown it away. So it watched, waited and plotted.

On the night of the full moon it decided to act. It had already followed the child and parent home. It had even infiltrated the child's room, sneaking into the toy box at the foot of the child's bed. It had begun plaguing the child's dreams, making them horrid and then eating them to gain more and more power. The creature was ready and it would have its revenge.

It hid behind the child's headboard, tormenting it while it slept. When it awoke and cried out for its parent was when the creature struck. Rising up from behind the bed it glared at the adult form of the child that had once abandoned it. The adult briefly stiffened and jumped back with fright, but it was too late. The creature unzipped its mouth and let all of the evil and darkness come fourth in a curse.

Several days later the police arrived at the home, a friend had called them after not seeing them for several days. The mother and daughter were both taken to a mental hospital. The mother could only gibber whilst the child was slack-jawed and unresponsive. The police found the remains of a doll that had fallen behind the bed. It was covered in rusty pins, grime and dirt. Yet through the dirt a name was found. In magic marker the adult's name was found scrawled on the foot of the doll, a child's handwriting, a mark of ownership written long ago. When the police showed the doll to the woman's mother she grabbed at her heart and nearly fainted. The child had not thrown the doll away, she had. . . . .

Prints of the Banette artwork can be purchased here. The print is available in a variety of framed options as well as on a tote or pillow.