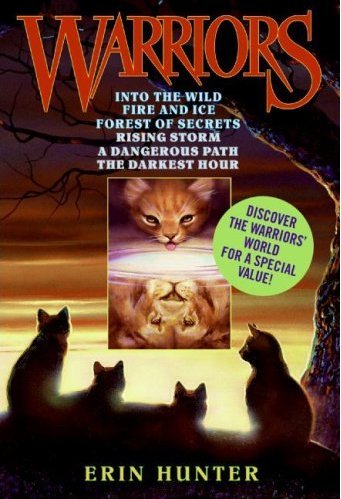 The Warriors is a series of books written by Erin Hunter that follows the lives of a group of wild cats known as the Clan Cats. There are four clans; River Clan, Thunder Clan, Wind Clan and Shadow Clan. The series focuses on the the life of the Thunder Clan cats and their interactions with the other clans around them.

The books are currently on their third series but this review will focus on the first series of books; The Warriors.

The story begins when a kittypet named Rusty decides to leave his life of comfort for the more adventurous life of a Clan Cat. At the tender age of six moons (months) he leaves the familiar life of comfort and joins Thunder Clan. Many in the clan resent his kittypet roots but he soon earns the trust and respect of many of the other cats in Thunder Clan. Not all of the other cats appreciate having a former kittypet in their clan and a small faction led by Tigerclaw does its best to cause trouble for Rusty (now known as Firepaw).

Thunder Clan is led by the she-cat Bluestar. It is her, while on a patrol with Greypaw and Tigerclaw, that welcomes Rusty (Firepaw) into the clan. She does this in part due to a prophecy that has been revealed to her: Fire alone can save our Clan.

After joining the clan Rusty is renamed Firepaw during his apprentice ceremony. He quickly proves his mettle in a short skirmish at the end of the ceremony. Bluestar herself decides to become Firepaw's mentor and Greypaw and Firepaw become instant friends.

Over the course of the books Firepaw becomes the warrior Fireheart and he uncovers a traitor in the Thunder Clan ranks. The traitor sub-plot spans all six books.

There are four clans in the forest and a fifth clan known as Star Clan. Star Clan is where the spirits of the fallen go to dwell. Some cats do not join Star Clan when they die and are instead left to wander the spirit forest alone for all of eternity.

Once every full moon all of the Clans gather at Fourtrees for a Gathering. It is during this one night of truce that disputes are resolved and news is shared. At all other times the clans do not mix.

There is a special type of cat known as the Medicine Cat. These cats are both healers and spiritual advisers to the clan leaders. They have the power to commune with the members of Star Clan and often pass on important information to their clan leaders. Medicine cats live on the outside of the Warrior Code in that they are allowed to mix with Medicine Cats from the other clans.

Each clan has a designated area of the forest that is theirs. Patrols leave scent markers to mark the boundaries of said territory and fights can (and will) erupt if another clan ignores those boundaries.


Clans and their Territories

Now, I realize that these books can be found in the Young adult section of the library (my daughter got me interested in reading these) but I have to say that the writing style is very engaging. In fact I have read every book in the series over the course of the last month. I am eagerly awaiting the release of the next book in the third series this coming Tuesday.

The name of Erin Hunter is a pen named used by the three writers behind the series of books; Cherith Baldry, Kate Gary and Victoria Holmes. The three writers decided to use the pen name instead of their own to insure that the books would all be grouped together on the shelf.

Each book in the series has a few sub-plots in addition to the overall story arc that spans all six books. Many issues relevant to young readers are addressed over all six books. The very first book talks about what it is like to enter a new school when Firepaw joins Thunder Clan. Other issues covered are what to do when you know a secret and dealing with forbidden love among others.

The books are very well written and the characters stay true to themselves over the course of the books. However, each new series of books focuses on the next generation of cats.

If this series of books sounds appealing to you a box set of the first six books can be purchased from Amazon: Warriors Box Set: Volumes 1 to 6 (Warriors) (Paperback)