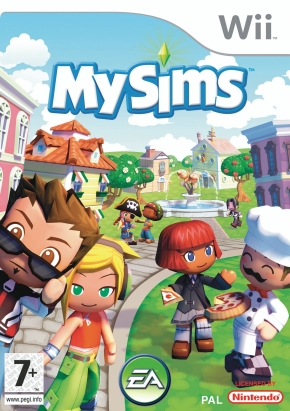 I have been spending the last week or two with EA's new MySims game for the Wii. Before I get to telling you what my personal thoughts are about the game as a whole let me take a few minutes to talk about the background of this game.

The Sims line of games has been a money maker for EA for a number of years now. Their great grandparent game Sim City was a huge success in its day, even I spent countless hours zoning and rezoning my town in an attempt to be able to raise enough money to build arcologies. Eventually I hit on the method of making a small town with high taxes and letting my computer run 24/7 at top speed. Yes, the game lost some fun but I built my mega-city!

With the release of the "Sims" line of games the emphasis changed from building large scale projects to building people and watching them grow, sort of like an ant farm but up close. Yes, a friend of my wife once told her that the Sim Child Protection Services took her babies away because they were trapped inside a wall! The same game that sent the Sim version of DCS to take away your kids also released a number of Sims add-ons to make your Sim's lives better, or at least more interesting.

With the release of MySims for the Wii many people were expecting something along those lines. If you are one of those people than don't buy this game. MySims is more of an Animal Crossing style of game. It's not about building relationships, it's about building the town and getting people to move in. Sadly, this game does not have a Wi-Fi component.

Premise of the Game

In MySims you are a builder who has arrived in a town that was once great but has since fallen into decline. As the builder, it is your job to build things and incorporate essences into them to make the town more appealing and thus attract people to move in. You do this using a very robust building system using blueprints, essences and blocks.

The town begins as a nearly empty one star town. Many areas of the game are locked until you advance the star rating and gain tools to unlock those areas. Once your town achieves a five star rating you have made it.

Before you do anything you will have to name your town and create your Sim. 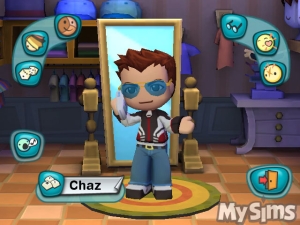 Unlike the very good system for making Miis on the Wii the system in place for creating your Sim is sorely lacking. You can pick from a selection of clothing, hair styles, glasses and two facial markings. You also have the option of picking a general sound for your voice.

What's that you want to specify the gender of your Sim? Ah, no. A lot of the options are fairly androgynous while some are downright obvious in their femininity. The only way to make your Sim appear to be male is to pick short hair, a suit and a deep voice. Gender means nothing in this game anyways and you can alter your appearance throughout the game so... if you want to be a man today and a woman tomorrow you can. 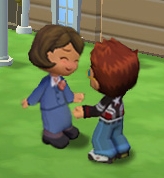 The first person you meet will be the Mayor. She will show you around town and take you to the spot where you will be building your home. Your lot is the biggest one in the game. Next door to your house is the lot where you build your workshop (where most of the game action takes place).

After you build your home you will be given a task by the mayor. She needs a podium and it is up to you to build it. Before you run to your workshop and build it you need to find some essences. Lucky for you the essences she needs grow on trees. 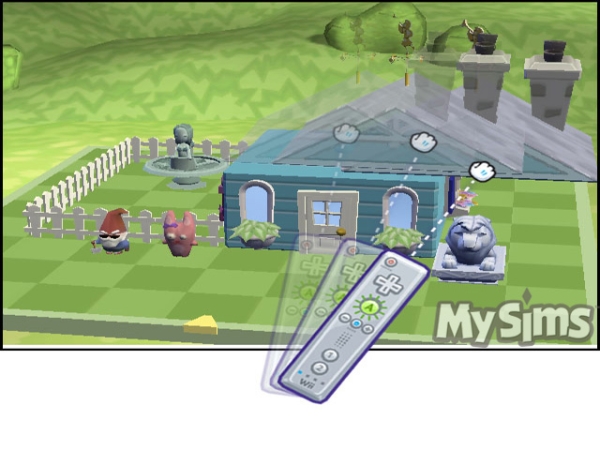 When building a house to move in new Sims you will be using a block system. As you move more Sims in more blocks will be available to you to use in construction. At any time you can also click on a mailbox and either evict that Sim or change their house.

For example, when you build your own home and workshop you will have a very limited selection of pieces to work with. Once you build the Pizza Parlor new building blocks and accessories will become available. At this point you can then go back to your own house and redesign it with the new pieces you have unlocked.

All is not perfect in house building land. There have been times when I simply could not get a piece into position. I would be very close and the piece would jump forwards or backwards and never line up with the open spot. This was mostly prevalent when putting up fence posts outside. The only way to correct for it is to move anything adjacent to the spot away. Eventually you will reach a point where you just build the fence first and then place the house when done.

When constructing furniture you use a similar system. Unlike home building new parts become available in your workshop when you reach new star levels. 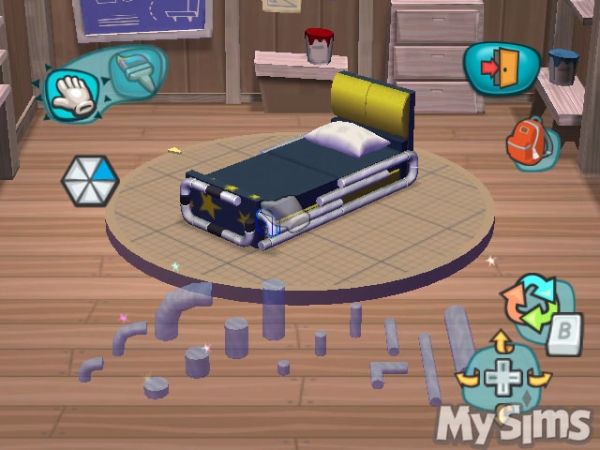 When constructing items you will be given a basic ghost blueprint to work from. As long as you cover up the shinning stars on the print the item will be legal. Other than that you can get as creative as you want.

After building with blocks you can paint the object with essences or add essences directly to the item. By adding essences you add interest to the piece. Add a bunch of cute essences and the item will become more cute and thus be more appealing to people who like cute things. As you become friends with people you will learn what they like and what they do not like.

As you progress in the game you will need to be creative. You will reach a point where someone wants an item that requires only 10 blocks but they want 20 essences added to it. You can paint 10 of those blocks with essences but then you still have 10 more to add. You could add them as items (not paint, think blocks) but doing so can make an item extremely large. I have found that in such cases you are better off turning those 10 blocks into 20 blocks by using smaller blocks. Then you can paint the whole piece with essences and not be left with something that has a ton of extra bits hanging off of it.

Some essences are easy to acquire because they grow on trees. You can acquire these essences by grabbing the tree (B button) and shaking vigorously. The essences will then fall on the ground for you to collect.

To speed up the process you can either water the tree or use fertilizer. Both of these options will cause the tree to grow more essences for you to harvest but using fertilizer will hurt the tree. A second dose of fertilizer will kill the tree.

At any time you can chop a tree down for wood essences. Doing so will gain you light wood, dark wood and dead wood essences. The type of wood varies by tree but all over fertilized trees give dead wood.

After chopping down a tree you can stomp the stump into the ground and plant a new one. 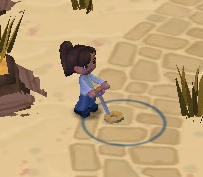 There are certain areas in the game where you will have the option to engage in prospecting. Once you begin you will have a detector device in hand that makes noise and cause the Wii-Remote to vibrate. As you walk around the intensity of the noise and vibrations will increase until you find something. At that point it is up to you to dig up what you found.

The only bad part about prospecting is that some areas of the game lag dramatically while prospecting. In can get so bad that you can't even tell what you are doing.

The other problem with prospecting is that some essences are extremely rare and hard to find. The only saving grace is that if you can not find and essence the person who requested it will give you a hint as to where to find it.

As you move forward in the game more Sims will want to move into your town. You will find these new Sims in the hotel. After talking with them you will learn whether they want to be a resident or a business. If you ask them to move in and they accept then you get to build them a house.

Not only can you build items that they request but you can also build them items you want them to have and redecorate the interior of their shops and homes. You can replace all of the tables and chairs in the Pizza Parlor with food enhanced items to really make the restaurant tasty! There is a limit to the number of items a building can have so be creative. 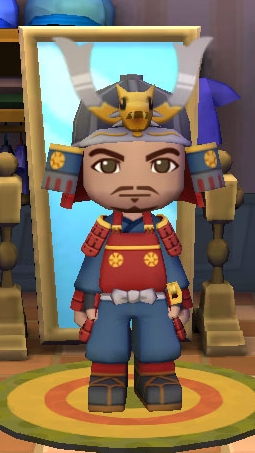 Some of the businesses you bring into town will provide other benefits to you. There is a boutique and a hair salon that you can move into town that will allow you the ability to give the Sims in town (you and your friends) funky haircuts and specialty clothes. Some of the Sims in town will also reward you with special costumes after completing tasks for them.

The MySims game is not a Sims game in the tradition of the typical Sims games released lately. Instead the game is designed to appeal to a worldwide audience and is more of a hunting and gathering quest game with a very addictive construction element thrown in.

MySims is not a heavy hitter game like Metroid Prime 3 or the forthcoming Super Smash Bros. Brawl. it is a fun game but if you are looking for something heavy you will be disappointed.

Who will like this game? All of the people who bought a Wii because they wanted to play Wii Sports. The game is so easy to get started on that anyone can play it. By anyone I mean the non-gamer market that the Wii has been tapping since the first photograph of an old lady in a senior citizen home playing Wii Sports Bowling was printed in the newspaper.

I rather enjoy this game. It is a light diversion and I can play it with my daughter. Well, she tends to monopolize the game and I have to use a crowbar to get her off of my Wii!