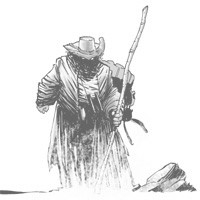 Looking for something new to read at the comic store? Why not check out Wasteland from Oni Press?

Wasteland is a new comic book by Antony Johnston and Christopher Mitten, published by Oni Press.

Wasteland takes place in a devastated, post-apocalyptic future America. Set one hundred years after a catastrophe known as the "Big Wet', it's the story of Michael and Abi, two characters with unique and unnatural powers, as they search for the fabled land of A-Ree-Yass-I; which legend says is where the Big Wet began.

Their quest will take them thousands of miles across a ruined, hostile land where technology has been forgotten and scavenging is a way of life. Where a relentless sun beats down through a cloudless sky. Where no birds take to the air, no forests carpet the hills. Where the oceans are fetid and poisonous, impossible to cross.

But Michael has been walking this land longer than he can remember. If anyone can beat the odds and survive the journey, Abi believes it's him. With his survival skills and her quick thinking, can they find A-Ree-Yass-I together?

Perhaps. But along the way they'll face betrayal, prejudice, war, revolution and more...

I picked this comic up a few weeks ago, in part because of the theme and also because the first issue was so thick! It didn't take me long to get enthralled by the art and writing. This is a good read.

The main character is Michael. He's a drifter of sorts but it quickly becomes apparent that this man is more then your average post-apocalyptic vagabond. The man has skillz, and he knows how to use "em.

Opposite Michael we have Abi. The sheriff of the town Michael stumbles into in issue 1. Abi has a strange sort of healing power that she uses on Michael. Strange in that her nose bleeds after using it, a sign that Michael recognizes

The publishers have provided the first issue as a free PDF download and I suggest you take advantage of it and check it out. I know you will be impressed and rush out to buy the rest of the series.