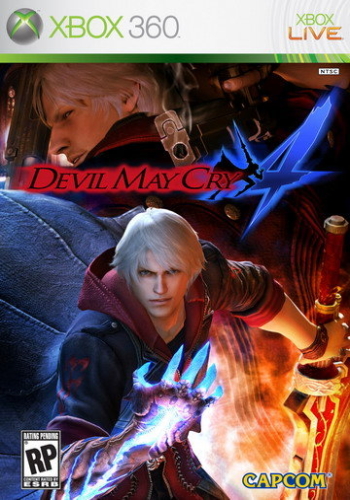 This being the first Devil May Cry game that I've ever played before (shocking, I know), I feel that my disappointment with the game must mostly be the result of my lack of experience with the franchise, although upon further reflection I suspect otherwise. Let's begin at the beginning, and focus on the game before I voice my gripes.

At the beginning of the game, newcomer Nero hacks and slashes his way through streets swamped with demons that look like some hybrid Scyther/clown creatures from the Silent Hill universe. Like a rabid Velociraptor on crack cocaine, Nero blazes a gory trail of corpses on his way to his destination... the Opera House, a structure that conjures images of Byzantine architecture.

The building itself is really very sublime, and definitely has an air of the ethereal. I like the architecture in this game. But more on that later. In honor of the demonic deity Sparda, A ceremony is being hosted by the secretive theocratic oligarchy known as the Order of the Sword, his Holiness himself being the guest of honor.

Quite nonchalantly, Nero takes a seat right next to the game's love interest and resident damsel in distress, Kyrie-- who also just so happens to be the sister of His Holiness' right hand man. Quite abruptly, the main event, a little soliloquy compliments of the Order of the Sword's BMOC is cut short as stained glass shatters and a crimson flash darts from the rafters to the podium in the blink of an eye... yes, it's just who you think it is, and he's just assassinated Devil May Cry's equivalent of the Pope. 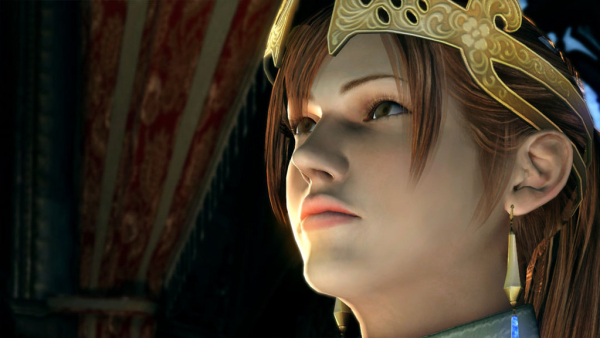 At this point, you actually get to play the game. Your skills are for the first time put to the test as you square off with Dante himself. He proves to be a worthy adversary... after finally whittling his health meter down to 0, the resulting cut scene makes it clear that Dante hardly broke a sweat. He exits the scene, and you become the proverbial cat in pursuit of the mouse.

Along the way, you find yourself embroiled in an intricate labyrinth of intrigue that's way more than you bargained for. There's much more to the Order of the Sword than they let on... as you progress, you delve further and further into the miserable little pile of secrets that the OotS was all along. But of course, you probably figured that much out...

Really, the story is quite predictable, and painfully typical. I won't ruin it for you, but the "twists" and "turns" of the game are really so boring that the whole thing is analogous to a roller coaster ride, where you can fully see and anticipate all that's coming. Though I would classify the game as a more of a mine cart trip before I would ever call it a roller coaster ride. Now, I hate to be "that guy" whose review is the lone outlier in a sea of critical acclaim and fangasms, but I really didn't find this game to be all that spectacular as a whole, and here's why. 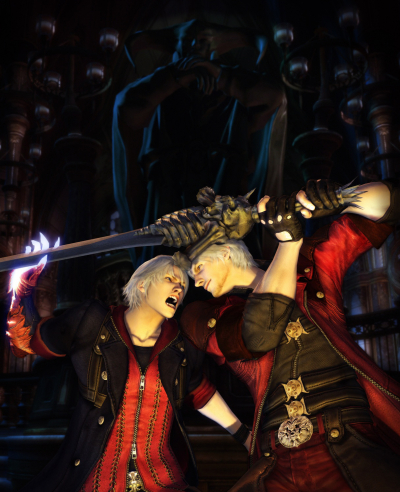 Well, I guess that this is a rather bad choice for the first bullet-marked item to to appear after I pledged to explain just why it is I don't like the game, as the combat system is really quite superb. Combos, combos, combos! Yes, to master the game you must transcend blind button mashing and actually choreograph your moves with utmost care and consideration, an elaborate dance that demands near Force-like reflexes, for in the most heated rumbles even a split-second's lapse of attention will invariably result in C-C-C-COMBO BREAKER!

This is an aspect of the game that I'm sure I was not able to really fully appreciate as I am really not privy to fighting games in the first place, but the fact that it squeezed some enjoyment out of me at all is testament to its greatness. Bottom line is, if the combat from the previous DMC games and their ilk is what you crave, you won't be disappointed by this fourth installment in the franchise.

On to the specifics, now-- you start out with a very... stripped-down moveset that at first may be represented (at least for the 360 version) by Y-Y-Y-Y (Red Queen [sword]), X-X-X-X-X-OHMYGODXXXXXXXXX!!!! (Blue Rose [pistol]), B (Devil Bringer [glowy gauntlet used to seize opponents a la the Hookshot or Grapple Beam, drawing them towards you]), rinse, wash, repeat. It doesn't take long, however, to accumulate a plethora of new moves, resulting in a mind-boggling amount of potential combo attacks. You're graded on just how masterfully you execute said chains. By avoiding harm and racking up the damage, you may rise from a "D" to "SSS." 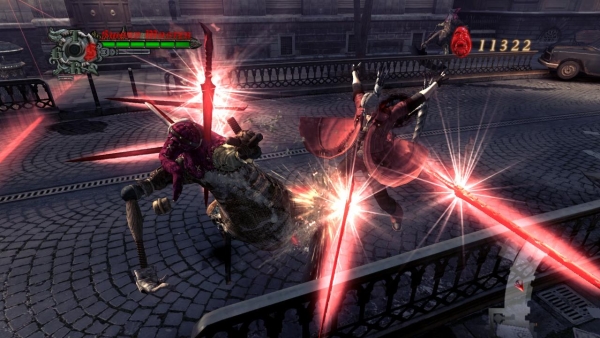 New moves may be purchased with the "crystalized demon blood" that you amass from both fallen foes and the very, very destructible environments (you can collect the stuff upon smashing a wooden chair for Pete's sake) as opposed to heading to the local market (for all your demon slaying needs!), you instead make your purchases at the feet of large statues of bare-breasted, hourglass-brandishing cat women.

In addition to buying power-ups, you may also purchase health and magic restoration items, along with specialties such as "holy water", which severely damages all nearby enemies. Oh, holy water, how often you've saved me from such dire straits! 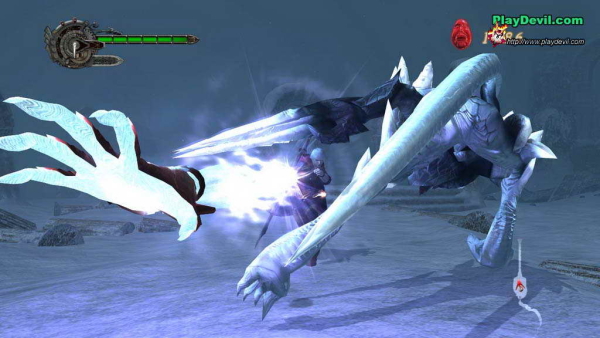 Now, how about some brief weapon diagnostics. Listed below are Nero's initial arms:

The Devil Bringer is important outside of battle, and is necessary to pull off certain maneuvers, like flinging yourself from floaty-glowing-orb to floaty-glowing-orb in order to reach high or distant places. Speaking of puzzles, the game is filled with them, but they're really quite un-necessary for the most part, and they really just come across as being half-arsed. Like, for instance, there's this one puzzle that's like a giant board game. You fling a hurl up in the air, and depending on how it lands a certain number of tiles are illuminated depending on the luck of the draw. Either it lands on a blank space, a beneficial space... or a "random battle" space. This game of chance was un-enjoyably drawn out, though it was rather un-enjoyable in the first place, as I am not privy to games of chance. Regardless, the whole thing was rather un-necessary, and just a taste of what was yet to come. Vanishing tile bridges, giant obstacle-demolishing spinning tops, floaty-glowing-orbs... none of it is very fun, especially considering the rather finicky, often fixed camera.

While the environmental sound effects seem nice at first, one gets tired of the same old cling-clang-drip sounds of dark, dank dungeons. As for the combat music... I don't think that they could have chosen a worse industrial metal-slash-grindcore (as in grinding my ears with a cheese grater) wannabe song to play during every single battle. Even if that was my type of music, I'm quite sure that I would consider it an embarrassment to the genre, nebulous as said genre may be.

See, here's a little example of what I like to listen to... as I type this review, I'm listening to Ohta-San on the ukulele. I may lose myself in some Animal Collective later, or perhaps even fire up the ol' Sansui so I may dose off to a little Siamese Dream (in vinyl form!).

Here's a little sample of the battle music to whet your palette: if input = "fight" then do print "The time has come and so have I, I laugh last because you came to die. The damage, the pain subsides and I can see the fear clear when I look in your eyes. I'll never kneel and I'll never rest, you can tear the heart from my chest. I'll make you see what I do best I'll succeed as you breath your very last breath. Now I know how the angel fell, I know the tale and I know it too well. I'll make you wish you had a soul to sell, I'll strike you down and send you straight to hell. An army comes from deep within, beneath my soul beneath my skin. That is your ending i'm about to begin, my strength is pain and I'll never give in." loop.

The depth and thoughtfulness exhibited by the above lyrics are mirrored by the scripted dialogue contained in the cut scenes that are interspersed throughout the game seemingly for the sole purpose of breaking the transcendent awesomeness of battle.

What to expect from Nero: a tendency to swing moods from BAAAWWWW to IT'S ASS KICKING TIME so frequently and to such extremes that I've no doubt in my mind that his power stems from a kind of bi-polar mania rather than demons. His lines reflect such. Dante: Rightfully cocky quips peppered here and there. He's Dante. No more, no less. Kyrie: Ehhhhh... fuuuuuu... squeak... Nero! 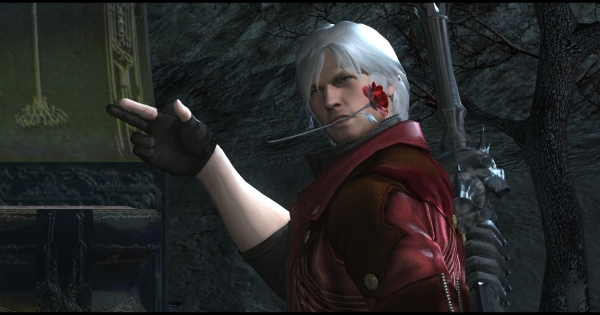 The Graphics-- The graphics are beautiful, really. Absolutely gorgeous. Except for some of the shadow effects (the forest level bugged me out with the jaggy tree shadows and MOAR BLOOM), I really can't complain. The graphics in the cut scenes are pretty much the graphics in-game. Granted, just like most new-gen games, DMC4 does suffer from clay/seran wrap syndrome, but at least (almost)everything looks nice and clean. If there's one thing that I don't mourn regarding the previous generation systems, it's jaggies. If you really want a good look at the graphics, check out some trailers, as words really fail to do them justice.

Would I Recommend This Game?

It should be quite clear right now that DMC4 is not my cup of tea, and even if it were, there are just too many little (and big) annoyances, so many that they quite outweigh the enjoyable bits. I guess that if you're familiar with the series and sufficiently glued to the... story, you might want to try it out. But I really don't know. To the average gamer, I would not recommend this game.