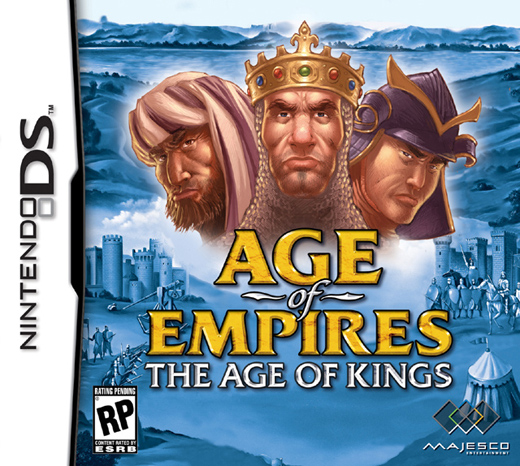 In 2006 Majesco Entertainment released a version of Age of Empires for the DS. In the process of porting the game from the PC it moved from an RTS game to a turn-based game. I have to say that this was a very good move. As much as I like the idea behind RTS games I always find that once you reach a certain point of domination in these games you no longer have the time to properly manage your empire on your own. Moving to a turn-based ensures that you will have the time to look over all of your empire and make better tactical decisions.

According to Majesco these are the selling points of the game: 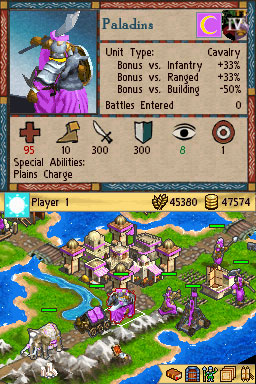 The game has five single player campaigns with each one based on a given hero. They range in difficulty from the tutorial level Joan of Arc to the hard level of Richard the Lionhearted. As you complete each mission in the campaign another one unlocks. The early campaigns have five missions each while harder ones will have more.

What I found very entertaining is that some of the campaign end missions are played through twice, once from each side. For example, the final mission in the Minamoto Yoshitsune (Japan) campaign has you defending Japan from an invasion of Mongol hordes led by Genghis Khan (Mongol). When you play the final Mongol mission it is the exact same mission as the one you played from the Japanese perspective but now you are the Mongol hordes attacking Japan! 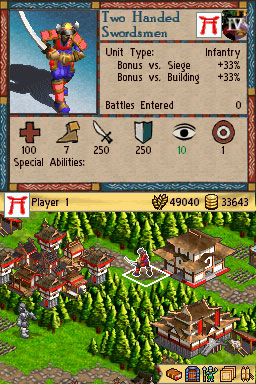 Even though both the Japanese and the Franks both gain bonuses from Farming they do not play the same. For one thing the powers of their heroes are different and the other thing is that they have differing lists of discounted units.


Each civilization also one unit that is unique to them. These special units can only be built once you construct a castle. Castles become available once you enter the "Castle" Age of the game.

The game covers four ages of civilization. Some missions start at higher ages while others start at level one.

The lowest age in the game is the Dark Age. During this age you are very limited in what you can build. Aside from mines, mills and farms (which are the buildings that give you resources) the only buildings you can build are stables and barracks. Lucky for you the Dark Age does not last very long and you will quickly move on to the Feudal Age. 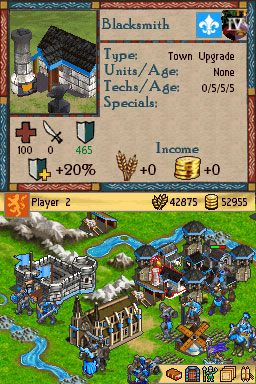 You will spend a good deal of time in the Feudal Age before you advance to the Castle Age. Like the Feudal Age before it you will gain the ability to construct a building that will open up new research options: the university. You will also be able to construct castles, churches and siege workshops. Castles become very effective strategic strong points, build them on the end of a bridge and your opponent will have a very hard time taking you out.

After the Castle Age comes the Imperial Age, where you gain the ability to build Wonders. These wonders bring in bonus resources to your empire. No other buildings become available but new technologies do.

When playing the game you can either use the stylus or the control pad and buttons. I tended to use both. Selecting and moving units is fairly simple though you do need to be careful when moving into areas that you can not see because running into a unit you could not see results in your unit ending its turn.

Which brings me to the combat system. 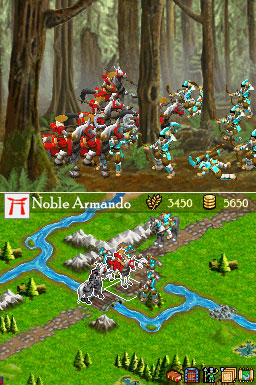 When you enter battle with another unit they get to hit you back after taking damage (unless they are destroyed). Some units have special combat powers that allow them to hit very hard even when wounded. Others can heal themselves between battles.

Before you commit to battle your battle advisor will appear on the top screen with the attack and defense scores of both units. Below that he will either give you a stirring speech on how your units will destroy the enemy, warn you of an even battle or even tell you that your men do not want to throw away their lives needlessly.

Once you enter combat a short animation will play on the top screen and the results of combat will soon be displayed. These animations can be turned off via the options menu.

Combat is short and satisfying. As long as you take terrain into account (yours and theirs) you can easily guess which battles are worth entering before you even see the combat advisor screen.

The campaign missions are fun but not overly challenging. Even the hard level missions are not all that hard. The ones with fog-of-war can be difficult the first time through but, once you know the map, the mission becomes a lot easier.

The multi-player is a good option for when you want a stronger opponent. You can play with up to four players via local wi-fi but using the hot seat feature is just as good (if not better considering it is turn-based). There are many maps to choose from and you can add in some CPU players of varying difficulty levels to round out the game.

I picked this up new for only $12. For that price it is well worth buying. Some have called this game Advance Wars: The Middle Ages and they are not that far off in saying so. Game play is very similar to what you get in Advance Wars: Days of Ruin just not as polished. If you like turn-based strategy games on the DS than you should consider adding this game to your collection.

All in all the game is good. Adding a custom map maker feature would add hundreds of hours of game play to the title but the existing maps are good enough.