>How do you take a traditional side scrolling platformer game and make it stand out on the Nintendo DS? For one thing you could incorporate the DS touch screen in a new and interesting way. Drawn to Life is just such a game.

Created by 5TH Cell, and Published by THQ, Drawn to Life is a single player adventure game for the Nintendo DS. Unlike many games that are on the DS Drawn to Life is a game that is designed to be a DS game. The game takes the stylus and makes it an integral part of the game.

Taking the role of the Creator you will find yourself drawing all sorts of items to help your character get through the different areas of the game. If that were not interesting enough you also have total control over how your character looks in the game.

This is the story of the Raposas and their village. for many years, the Raposas lived happily in their village and prospered until a rebel Raposa named Wilfre, created an army of evil shadows to spread darkness over the land. He tore pages form the Book of Life and hid them across the world. These pages contained the templates for the moon, sun, stars and other cherished possessions. With those items gone, the Raposas began to abandon the village. Those who remain cry out to you, the Creator, to draw a hero to help them rebuild their village back to greatness.

You take on the role of the Creator and help bring a small village out of the darkness and back into the light. A former member of the village has taken the Book of Life, a relic left by the Creator, and it is your job to find the missing pages to restore the town to its former glory. Using the stylus you will create all sorts of items for the village as well as items to help your character travel through the various game areas.

While in town the game takes on an RPG feel as you walk around and talk to an ever increasing assortment of characters. The population of the village slowly increases as you rescue lost villagers from the darkness.

Outside of town the game becomes a side scrolling platformer style of game. In each of these adventure areas you have to clean up the darkness, rescue three townsfolk and find four missing pages from the Book of Life. There are also three 'secrets' that can be discovered. 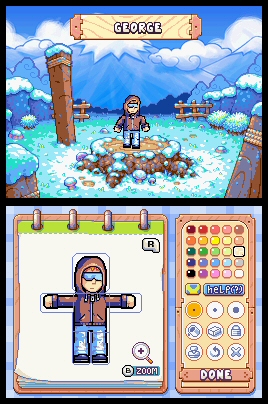 The heart (and selling point) of the game has to be the drawing system. The top screen shows the full view of what you are working on while the bottom screen is where you do all the drawing.

There a few levels of zoom for adding extra detail and, if you can not draw well with the stylus, you can also use the control pad to draw.

As you progress through the game you will discover new templates and new color palettes. These will allow you to create more interesting creations if you are not artistically inclined.

When creating there are two brush sizes, an eraser, a fill tool and some stamps. With the aid of the preset character templates you will have no problem creating a good looking character in no time. If you are artistically inclined you can really go to town with this game and make all sorts of interesting characters.

Aside from character creation during the course of the game you will be presented with empty templates to complete for many items that will help you on your way. In the first stage you will be creating a snow gun, clouds and other platforms. In later stages you will be creating spaceship, submarine, wings and a plethora of other items. 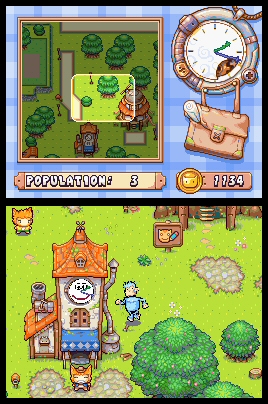 You begin the game in the town. A couple of Raposa kids, Mari and Jowee, have managed to get the attention of the Creator (you) in an effort to save their town. In fact, other than those two kids only the Mayor remains in town.

In a few minutes time you will have created a hero. After that you will begin exploring town, at least the portions of town that are not shrouded in darkness.

As you complete adventure zones and rescue Raposa captured by Wilfre's evil shadow minions the village will begin to grow larger and larger. You will be able to push the darkness further and further back.

One thing I like a lot about this game is the attention to detail given to the town residents. Each character is an individual. Unlike many other games you will find yourself feeling invested in the characters in the town as they are more than window dressing or a plot excuse to go on a rescue mission.

There is also a wishing well in town which you can drop coins in. Up to 10,000 coins can be thrown into the well to gain all sorts of bonuses from extra lives to an alternate town. 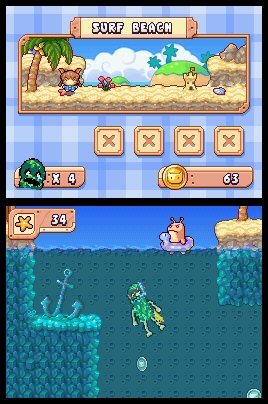 Each adventure zone is broken down into multiple areas. Each area is broken into four subsections and has a page from the Book of Life hidden somewhere within. You also have to rescue three missing Raposas and you can find three secret items. Not all subsections have secrets or Raposas.

The game prevents you from leaving a subsection if you have not found the missing Raposas or page from the book, no such block exists for secret items.

The enemies you face in each area are not that hard to defeat, the only difficult part comes from the flying creatures that have a very bad habit of coming on screen in the middle of a jump and push you back, usually off a cliff and to your death!

Along with finding pages and rescuing lost Raposas you also have to clean up the bits of darkness in each area. You do this by rubbing on the screen. The long spots of darkness spawn shadow creatures so you want to clean them up as soon as you spot them.

At the end of each adventure zone is a boss stage. these stages are broken into two areas and if you die in the second area you do not have to complete the first area again. In fact, any time you die you re-spawn at the beginning of the current subsection in which you are in.

There are three bosses in the game and the final boss, Wilfre. The first boss is a dragon that lives in the cold and is not hard to defeat. The second boss is a two stage creature and the first stage is a real pain while the second stage is fairly easy. The third boss is a giant fish that, while not difficult to injure, has a bad habit of spawning shadow fish that can quickly overrun you. The final boss, Wilfre, is a two stage boss but is not that hard to defeat.

Drawn to Life is a great game for kids. The drawing system truly makes this game more than just a combination RPG and platformer. There is a multi-card play format but I have not tried it.

If you are looking for a short game with a very creative design system than Drawn to Life will be a good game for you. It's engaging RPG elements will satisfy even though you can complete the game in under ten hours.