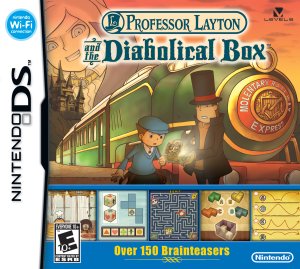 As before Professor Layton and his apprentice Luke have stumbled upon another mystery. It's up to them to navigate their way through numerous puzzles to determine who - or what - caused the death of Professor Layton's mentor, Dr. Schrader. Was it the mysterious Elysian Box, rumored to kill all who open it? Professor Layton and Luke find a clue that begins their adventure: a train ticket for the Molentary Express. 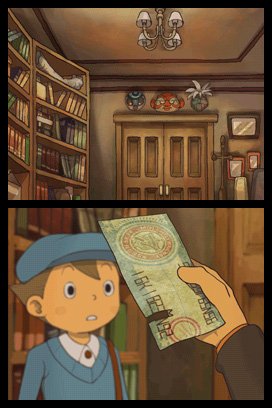 The game begins with a very short tutorial format that explains the basic game controls and how to move about the world. Within ten minutes you will have solved a handful of puzzles and have met a few interesting characters.

The early puzzles are not difficult and they serve to let the player know that some puzzles have answers that require thinking outside of the box. When solving puzzles you need to not only consider what is written but also what is not written in the instructions. Some puzzles become very easy after you alter your point of view. This can be as simple as turning the DS on its side.

You do not need to solve every puzzle in the game to complete the story mode. In fact there are only a few points where you can be stopped in your tracks for not completing enough puzzles. As long as you solve 80 puzzles as you near the end of the game you will be fine.

The core puzzles are not excessively difficult while several of the side puzzles will have you scratching your head and using coins to purchase hints. Even though this game is rated for 10 and up you may find this game turns your preteen into a screaming monster when they come upon a difficult puzzle. 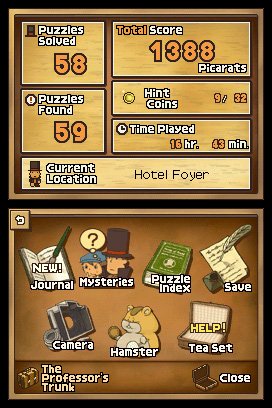 Along with the puzzles that require solving there are also a few mini-games.


You needn't complete all of these mini-games to complete the story mode of the game but it does help. If you give someone the wrong tea just walk around and you will get the chance to offer them a different tea in the future.

It is also important to note that after you complete the story mode the game will save right before the ending. This allows you to go back and find any puzzles you may have missed. The old woman's shack also exists in this game and puzzles you may have missed from earlier stages will be found here. This happened to me on a few occasions when I solved a puzzle that advanced the story before completely exploring the area I was in. 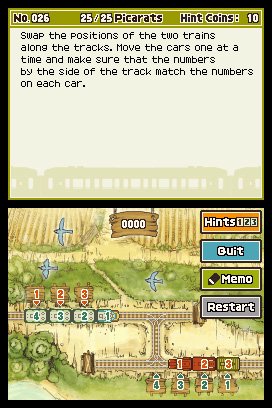 If you find a puzzle to be particularly difficult you can spend a hint coin (up to three) to get a hint on the puzzle. Some of these hints are obvious while others will prove useful. Don't be surprised if you come across a hard puzzle and all of the hints point to things you have already noticed.

When you solve a puzzle you earn a number of Picarats. This number decreases if you submit a wrong answer. It is generally safe to assume that hard puzzles will be worth more Picarats but you may find this does not always apply to you. Based on your own experiences you may find some of the high Picarat puzzles are easy while some of the low value ones are hard.

The previously mentioned hint coins can be found all over the place. Most areas have three hidden somewhere in the background.

Conclusion
I had a blast playing this game. I found the majority of the puzzles challenged me to think (sometimes differently) and the hints more often than not helped me when I was stuck. I found the story to be very engaging though some of the plot points were fairly transparent if not outright obvious.