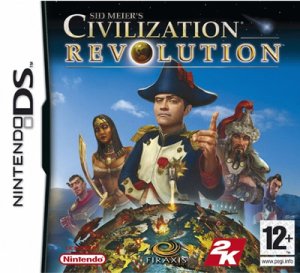 Sid Meier's Civilization Revolution on the DS is a game, or is it? Calling it a game sounds almost like an insult.

Civilization is one of those games where you start playing it and quickly forget all else. Countless times I would sit in front of the computer telling myself, "just one more turn and then I'll go to bed," only to find myself looking up to see the sunrise! Some folks complained about solitaire on Windows being the ultimate time wasting piece of software but that venerable bit of code has nothing on Civilization and its offspring.

The main line is now up to Civilization IV and that is what Civilization Revolution is based on. I only have the Nintendo DS version so the rest of this review will focus on that. 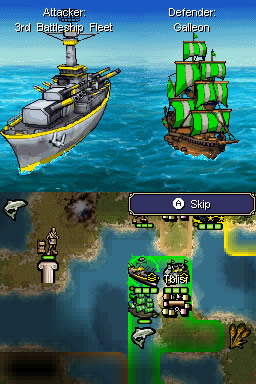 You can use either the stylus or the control pad to move around the bottom screen. I prefer to use a combination of both; using the stylus to select units and towns while using the control pad to navigate said units. The designers also made the intelligent decision to map the right button to take you to the next city, which saves a lot of time and gets rid of the problem of forgetting to check on a far away city. I have no complaints about the control system.

When units are stacked a small window appears on the side from which you can select the unit you want. Up and down arrows appear if the list is rather long.

You can end your turn by either pressing the B button or by touching the "End Turn" button that appears on the bottom screen.

The game includes 16 playable civilizations. Each one has its own bonuses and fits a certain style of play. For example, if you prefer to play the aggressor and want to win a Domination Victory (capture all enemy palaces) you may want to go with the Aztec empire. Their main bonus is that their units heal fully after any battle that they win. This is a huge advantage in the game that makes them very hard to defeat.

Other civilizations are better at acquiring new technologies or meeting the other victory conditions. There is no one perfect civilization and the game can be won using any of the civilizations provided. One may better fit your style of play but all are more or less equal.

When the original Civilization game hit the market in the early 1990's there were only two ways to win; kill everyone else or make it to Alpha Centauri. In Civilization Revolution there are several ways to win:

Domination is the only victory that is fast. The other ones have a construction phase that can not be rushed. I have also found that most CPU civs act like castrated dogs once you take their capital! 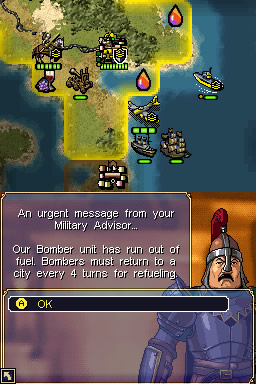 One thing I found very interesting in this game is the way you can wage a culture war. That's right, you can take control of enemy cities without sending in ground troops!

Some of the buildings you build (and some wonders) increase the culture level in your lands. As your cultural influence expands so do your borders. If your culture comes into contact with an enemy city, and their civ is less cultured than yours, there is a chance the city will flip and join your civ. The best part is that flipping a city does no harm to your diplomatic relations! This can also back-fire if you run into an enemy civ (or even a friendly one) with more culture than you.

When a city flips all military units inside the city also flip. No buildings are destroyed either.

There are also some great people who can cause cities to flip. The construction of city walls will prevent a city from flipping unless the other civ has the Hollywood wonder.

Combat is very straight forward. You select a unit and select the unit (or stack of units) you want to attack. The top screen shows the battle.

What is new is the ability to make armies out of three of the same unit. If you have three legion units in the same square you can combine them into an army that has three times the attack and defense scores of one single legion! It is very important to build armies as otherwise your battles will be nothing more than meat grinders.

An Aztec army is extremely deadly, three times the power and they heal 100% as long as they win? Yeah, good luck taking them down!

The only problem with armies is one that applies to the units. Once you acquire a new military technology odds are that one of your military unit choice will no longer be available. This is very frustrating when you are getting ready to build the third unit for an army and suddenly you can't produce them anymore! you also do not have the option to upgrade units you already have, unless you create Leonardo's Workshop, which is a one use wonder (flipped units will not upgrade).

The tech tree has been pruned a bit for this game. Some things you may be used to no longer exist, this applies to both technologies and units (buildings too).

The fabled chariot, origin of the "chariot rush" strategy from earlier incarnations of the game is absent. Looking for workers to build roads and change the terrain around your cities? They are not there. You can still build roads but you do it from the city menu.

There are only two types of aircraft in the game; fighters and bombers. Once you progress far enough with your navy you will only be able to build cruisers, battleships and submarines. Cruisers function as transports.

Like going for the nukes? You only get one! After you use it it is gone. No, the people will not let you use it so don't even try it under a Democracy!

The tech tree, unit lists and building options have been thinned to make the game quicker and easier. I don't miss much but you might.

The game plays fast. Expect to take about one to two hours for a game at your skill level. Game time will shorten or increase based on your ability and how spread out the other civs are.

It might have just been the settings I was using but I found it annoying that the enemy civs did not account for our diplomatic histories. If I double crossed them ten times they still offered peace. I never did get one of them to give me a technology in exchange for peace but they often offered me the paltry contents of their coffers not to destroy their final city!

The game does have the "one more turn" aspect to it but, unlike the PC version, you will not be playing all night.

The multi-player side of things requires everyone to have their own cartridge when playing locally. If you want to play online you need friend codes or you can just play with random players on Nintendo WFC.

I don't understand why anyone would want to play the non-portable versions of this. If I'm going to sit down in front of a screen in my house it will be a PC monitor with Civilization IV on screen!