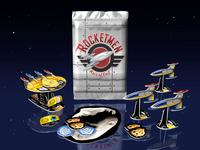 Earth has been overrun by the evil Legion of Terra, and it's up to the Alliance between Earth's rebels, the Mercurians, and the Venusians to stop Terra's and Mars' Axis of Evil!

Using the same punch-out ships as the previous WizKids game Pirates, this game took the action into outer space. This game also cleaned up a lot of the problems that existed in the Pirate game. The main problem that was fixed has to do with actions. In Pirates it was move or shoot, now you have an amount of action points that you can use to move and shoot with.


Rocketmen: Axis of Evil is a fast and furious game of spaceship combat between two or more players, who battle for the resources of an asteroid belt and ultimately for the fate of the entire solar system. Players collect ships and crew to build customizable fleets (much like in WizKid's previous popular game series "Pirates"), and then they gather resources during the game to add more ships to their fleets. The first player to capture his or her opponent's home base, or to destroy all of the ships in his or her opponent's active fleet, wins.

I am offering up a large collection of ships from this game that run the gamut of common to super rare. Most of the ships have never been punched or assembled. I also have several packs of the promo cards that came out in an issue of Scrye magazine. In total I have about 1 1/2 booster boxes worth of cards.

I am looking for only $50 for this collection plus you pay the shipping. I'd like to use that $50 to purchase the new Wii Big Brain Academy game.