Another game night has come and gone.

We had a small gathering of only three players and we managed to squeeze in two different games.

Donovan was the first to arrive; thankfully he brought a couple of twelve-packs so there would be no danger of any of us dying of thirst! We were unsure about Dan as he had a dental appointment to make prior to the game. 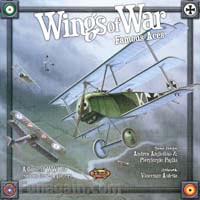 As luck would have it, just as Donovan and I were setting up for a game of Wings of War Dan showed up. We decided that it would be Dan and I vs. Donovan.

Donovan took the German side with a Fokker and an Albatross. I was flying a Sopwith and I can't remember what Dan was flying. What I do remember about Dan's plane was that it was fast and could not corner very well.

My Sopwith was very good at making tight right turns but it couldn't turn left very well, something to do with the torque of the engine.

Let me take a moment to explain how this game works.

Each player gets a plane and each plane has three items of information on it; maneuver deck, gun deck and hit points.

The game is very well designed in that the use of the maneuver decks accuratly represents the way these planes behaved in the air.

Maneuver deck - This deck of cards shows all of the maneuvers your plane can do on a given turn. A turn lasts through three maneuvers. What this means is that if your deck only has two left turns, you can only turn left twice on the same turn!

Gun deck - Whenever some gets shot at they draw cards from this deck, one card if it is long range and two if it is short range. The cards have numbers (0 - 5) for damage and some have special conditions as well. Your engine can be damaged, your plane can catch fire or leave a smoke trail, and the enemy gunner can also have his guns jam!

Hit points - once you sustain this much damage you crash.

The game got off to a flying start and Donovan's Albatross was the first to fall out of the sky.

A few turns later Dan sustained engine damage, this caused him to have to play one stall card every turn. This had a very big impact on his ability to maneuver as it made it very hard for him to do a 180 degree turn.

Donovan's Fokker was on me hard and he managed to cause my plane to catch fire! This means that for the next three turns I would be drawing a damage card until the fire went out. At this point I had taken about 10 points of damage and my plane could only take 15. I had more than 10 hits on me but most of the cards I drew were for zero damage!

Just before my fire would have gone out Donovan managed a lucky short range shot on me and I fell from the skies!

Dan lasted a few turns longer but his stalling problem made it very easy for Donovan to anticipate his moves and shoot him down.

In all we had fun with the game and do look forward to playing it again. 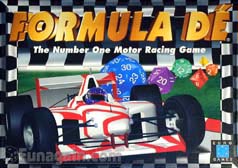 After a short break we turned out attention to Formula De.

Formula De is a racing game in the tradition of Formula one racing. We used one of the stock tracks that came with the game, the Monaco raceway!

What's great about the Monaco track is that there are several very tight corners on the track and only a few long straight-aways.

We decided to go with a 2 lap race and after figuring out who would be in what pole position we started.

On the first lap we beat our cars pretty hard. We left a lot of rubber on the asphalt and Dan burned up his brakes and fuel.

Going into the second lap all of us pitted to regain our lost tire points. Things were going well for me until I screwed up after the first turn.

I took a gamble by entering 6th gear and rolled too high. I burned up my new set of tires and spun out. Dan and Donovan soon passed me and due to my lack of tire points I had to play a far more conservative game. That one gamble cost me the race!

Because Dan ran out of gas he was also in a tight spot. You see, fuel is needed if you want to down shift more than one gear and when you go from a long straightaway to a sharp corner you need to downshift. Due to this lack of fuel Dan was handicapped and Donovan squeezed out a win!

Once again we had fun with the game.

If you are in the greater New Milford CT area and want to join in on one of our game nights please drop me an email at steve at hmtk.com

You can buy both of these games directly from Funagain games.