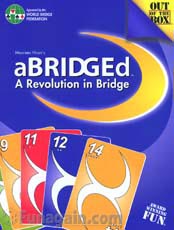 Bridge has always been a distant phenomenon for me, as it has permutated a good deal of society; yet I have never actually seen it being played. From articles in the paper to almost crazed fanatics I met, Bridge was certainly touted as a deep, fulfilling game, yet for some reason never attracted me. However, when I saw aBridged (Out of the Box Publishing, 2006 - Maureen Hiron), I was suddenly interested. While Bridge may be complicated process, Out of the Box Publishing is well known for its simplicity, and I was certainly eager to see this "Revolution in Bridge".

Now, one may take my comments with a grain of salt, since I've not had the pleasure (?) of playing Bridge; but if this is simplified Bridge, then I really don't want to go much farther. I didn't dislike aBridged but found it much simpler and almost inferior to other trick taking games that I've played. It takes out the complicated and intricate bidding mechanic that Bridge contains, and you're left with a fairly bland game. The "Dummy" aspect I find a bit dull (especially if I am the dummy). Again, I'd like to emphasize that I don't think this is a bad game, but it's certainly not a "revolution" either.

The game involves four players split into two partnerships. One person is chosen to be the first dealer and shuffles the deck, dealing out the cards to each player. Interestingly, two decks are including, so that one can be shuffled while the other is being dealt, to keep the game from slowing down. The decks are identical to a regular deck of cards, except that they have colored backgrounds for suits (red, green, yellow, and blue) and are numbered from two to fourteen. The cards numbered eleven through fourteen have a number of pips marked on them, with the "11" having one pip up to four pips on the "14".

Starting with the dealer, each player has one chance to declare "Pass" or "Play". The first person to state "Play" becomes the declarer, and their partner becomes the "dummy". The dummy places all of their cards face up on the table, while the declarer declares which color is "trump" (he can declare no-trump if he desires). Each player must then declare their hand strength, which is the sum of the pips on all their cards. After this, players must declare their color count (the largest quantity of cards of one color). Play then begins, starting with the person to the left of the declarer.

If everyone declares "Pass", then each player states their hand strength, with the team having the higher total becoming the "declaring team". The declarer is the person with the higher total of that team, and the other player lays their cards down, becoming the dummy. The declarer then decides whether they can win either at least seven or ten tricks, announcing this fact as well as the trump color. Players then state their color counts, and play begins.

Regardless of whether there is a "Pass" or a "Play", gameplay is the same. When a player plays a card, each other player must play a card of the same color as the card led. If the player does not have this color, they may play any other color card. Instead of the "dummy" playing their own cards, the declarer picks the card from the dummy's hand to play. The player who plays the highest numerical card of trump wins the trick; if no cards from the trump color were played, then the highest numerical card of the color is led. The winner of the trick then plays the lead card for the next trick. The round continues until all thirteen tricks have been played and won.

At this point, players score points for the round. If the declarer announced "Play", then their team must win at least ten or more tricks to score points (from 90 to 120). Otherwise, the other team wins points for each trick over four that they win (from 10 to 550 points). If the declarer announced "Seven" or "Ten", they must have taken at least that many tricks to score points (which are sufficiently less - the highest is 65). Otherwise the other team scores points. After points are summed up, the next player becomes the dealer, and another round begins. After four rounds, the points are totaled, and the team with the higher total is the winner!

1.)Components: For a card game, aBridged certainly comes with the complete package. Not only are there two decks of cards (which, by the way - are of high quality vinyl material), but also four pencils and four score pads are included, along with a reference card for each player. Everything is stored in a nice plastic insert inside a sturdy, smallish box. My only niggling complaint would be that the only difference between suits is the color, making the game difficult for those in poor lighting or with color blindness. Otherwise, the game is up to Out of the Box's high standards of quality.

2.)Rules: The rule set is the longest I've ever seen for an Out of the Box game, which is still pretty short. They are ten pages but rather nicely formatted and with a lot of information for those who aren't used to playing Bridge or any trick-taking game for that matter. When teaching the game, I suppose that it might be old hat for Bridge players; but I and the other players I taught, who hadn't played Bridge before, were easily able to pick it up.

3.)Pass or Play: In most of the rounds that I've participated in, it seems like players pick "pass", as taking the "play" option is very dangerous unless you have an excellent hand. The problem is that you have to declare "play" before you have much information about the other players' hands. The only information one has is the cards they've drawn. "Pass", on the other hand, is much easier, as players will know both the hand strength of their opponents and the cards that their partner has. Perhaps I'm a novice (and will probably always remain so), but I can't see that playing "Play" is a good idea unless you have a spectacular hand; otherwise, it's simply a guessing game.

4.)Dummy: At first, I thought that the dummy idea was an interesting idea, allowing one player to effectively play with two hands. But in practice, this really fell short for me. When you are the "dummy", there is really nothing to do but to sit there and watch while your partner plays your cards. If this happens in two rounds, that's half the game that you simply sit there! Maybe this is fun in a tournament setting, but in friendly, casual, play I found it disappointing to not be involved in each hand. For me, the fun in a trick-taking game is stealing a trick from an opponent and working together with your partner to do well. As the dummy, you can do neither, and it brings the game down for me.

5.)Fun Factor: I'm not sure if the game will be fun for Bridge players, since they will find it stripped down and too simple for their tastes. At the same time, I don't know that players who enjoy trick-taking games will have fun either, because the game lacks the depth and involvement of other games of the genre - even those that are public domain, such as Hearts and Spades. I had a fun time when playing; but when I was the dummy, I was really rather bored - other than an interest as to whether my partner won the hand or not. Declaring hand strength and color count sounded like a fascinating idea but in practice was really too mind numbing to keep track of.

I may possibly be too hard on aBridged, since I simply felt that it didn't stack up to other, better trick taking games. I know that the idea behind it is noble, to bring the classic game of Bridge to the masses. But instead, I feel that the original idea has been diluted to a degree that much of what made the original game so engrossing - complicated or not - is gone. Only a shell of the original game is left, and it wasn't attractive enough to me, mechanic wise, to draw me from other games in the same genre.
Tom Vasel
"Real men play board games"
www.thedicetower.com