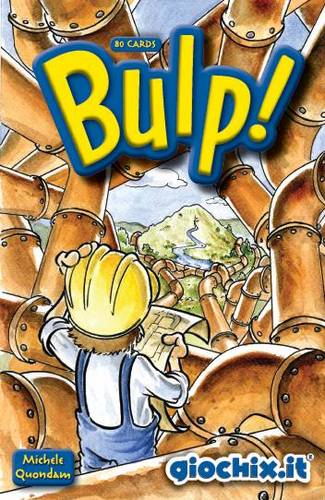 I tend to look at older games with a bit of nostalgia, although there are some that simply make me nauseous at the very thought of them. Waterworks is one of those games; it has brought joy to many â€“ but never to me, and I got rid of the game long ago. When I first read the rules to Bulp! (Giochix.it, 2007 - Michele Quondam), I was immediately reminded of the older game. The designer has stated that they haven't played Waterworks, but I'll tell you it's an awfully coincidental design!

Which simply means that I don't like Bulp! It's a game with too much luck and very little fun. The idea of water flowing through pipes is a good one, but it simply falls flat in play. I found that some kids enjoyed the blocking of other players, and the short length keeps the game from dragging too much. But I can't really see any strategies other than the obvious, and the game continually reminded me of another tunnel building game â€“ Saboteur â€“ that used a similar system but in a much better way. Bulp just feels uncreative and lackluster â€“ there's almost zero excitement in a game that has blocking and pipe twisting.

Each player places a town card an equal distance from a central spring. A deck of pipeline cards is shuffled, and six are dealt to each player. On a player's turn, they simply draw the top card, then place one card on the table that connects to any player's pipeline. Cards must all follow the same orientation and must connect to the pipes shown on the cards.
- Some cards show a single pipe, or a curved pipe, or even a pipe that splits up in a "T" or "X" shape.
- Other cards show a "break" (with water pouring out) on them and can only be played on top of another unbroken pipe of the same shape. A player can "fix" a break by playing a solid pipe on top of the break even if another arm of the pipe is added (a "T" can be played on top of a broken straight pipe.)

On a player's turn, they may also discard a card to place a "cap" on any open outlet of their own pipeline. This capped pipe may have no more cards played on it. Either way, play passes clockwise until one player manages to touch his village card with an outlet from the pipeline. There can be no broken parts of this pipe or uncapped outlets breaking away from it to work. The game also ends when the draw pile is depleted.

1.) Components: If anything, Giochix knows the best way to package a card game - with two small decks of cards fitting into a plastic insert that slides into the game box nicely. The pipe caps are simply blue plastic chips that fit in a small plastic bag, which aren't as thematic as the metal wrenches from the original Waterworks game. The cards themselves are nicely done, showing large pipes with workers and animals cavorting around them; and everything fits together to make a nicely designed pipe layout. I wonder why they didn't use square cards, so as to make it easier to figure out the starting distance; but I can't complain with how the game looks.

2.) Rules: The rules are printed in several languages on a long, folded piece of paper; the English rules are oddly wrapped around one end. They are easy to understand with pictorial diagrams on just how to place the pipe and an alternate scoring method (also known as "too convoluted to care scoring"). The game is VERY easy to teach; even young kids were able to pick up the game in a flash.

3.) Fun Factor: Some players will enjoy the fact of forming a pipe layout; and I think that I can safely say if you enjoyed Waterworks, you'll probably like this game for the same reason. There is a decent amount of interaction, as players who ignore others will quickly find themselves losing; and an unchecked player will end the game in a minute or two.

4.) What's not fun: The game is completely immersed in luck; so much so that I simply cannot see how players will enjoy it. Most of the game is spent either fixing broken pipes on your own line or thwarting an opponent. Eventually there will come a point at which one player will finally complete their pipeline; not because they used tremendous strategy, but because finally no one had the cards to stop them. There is very little variety in the game - players will simply build a pipeline straight to their town with a little maneuvering due to other players messing with them. Why do anything different?

I can't recommend Bulp!, if only for the fact that the game Waterworks is more readily available and has virtually identical game play with a few minor differences. But even beyond that, Bulp!, despite decent components, just offers no strategic or fun returns after each playing. Bulp! may work as a kid's game, since it offers enough minor choices and interaction to be enjoyable for the younger folk. It's also short and simple to setup and play. But all of that just fails miserably for me in the long run, because I found myself simply not caring if I ever finished my pipeline or not; since I had little control over the outcome. Bulp! is Waterworks without the fun. And that's if you considered Waterworks to have fun included, which I don't.