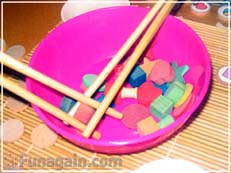 I knew from the name of Chopstick Dexterity MegaChallenge 3000 (Pair-of-Dice Games, 2006 - Greg Lam) that I would be extremely bad at the game - and indeed, I've never come close to winning. Even though I've lived in Asia for many years, utilizing a chopstick effectively is really something that I just can't seem to do (I love my fork!). However, the basic mechanic in Chopstick MegaChallenge is for players to grab specific shapes with their chopsticks in order to become the Chopstick Grandmaster of Japan.

It's a dexterity game that, even though I'm horrifyingly bad at, is one that has generated a lot of fun both with teenagers and adults and can be extremely funny and enjoyable just to watch! I have had to caution some folks (teenagers especially) not to stab each other when playing; but really, it's just humorous to watch two or three people go to town with chopsticks in a furious, crazed battle. Even if you are like me, an idiot or novice with these utensils, you might want to check out this silly, silly game.

A large bowl is placed in the middle of the table, holding twenty-five wooden shapes. Each shape (disc, cube, star, heart, or spool) is in one of five colors (purple, red, blue, yellow, or green). Each of two or three players takes a pair of chopsticks and a smaller bowl, placing them in front of them. A pile of thirty tokens (one matching each shape, as well as a "wild" color of each shape) is placed face down on the table, and the game is ready to begin. If three players are playing, the preliminary round begins. (The wild discs are set aside for now.)

One player flips over a disc, and all players must then quickly pick up all the pieces that either have the same color or the shape shown on that piece. The player who grabs the most is the winner of that round and retains the disc. There are some distinct rules about grabbing, however.
- If a piece is knocked out of the main bowl (this happens a lot), then it is eliminated from that round.
- Players may not attack another player or their chopsticks.
- Players cannot move the bowl (deliberately, anyway).
- Players can try to knock the item out of the opponent's chopsticks or steal it directly but cannot do this once the object is outside the bowl's area.
- Players can grab the wrong pieces with no penalty other than the time they've wasted.

After the preliminary round, one player is eliminated (has the fewest discs), and the championship game begins (this is where a two player game would start). The wild discs are added back into the mix, and play begins anew! This time, however, players are attempting to grab the one shape that has the exact color AND shape shown on the disc. If a wild disc is shown, players must grab all the shapes, regardless of color. In this game, if a shape falls outside the bowl, then it must be immediately placed back in the bowl. The game continues until one player has won a certain amount of discs, at which point they are declared the winner. (five tokens usually)

Three people can play the championship game without the preliminary round; but the winner of each round sits out the next round, flipping the disc over for the other two players.

1.) Components: The game comes with three pairs of wooden chopsticks and four plastic bowls - one larger and the other three fairly small. The chopsticks are fairly good quality and have stood up well even in some rather fierce battles I have beheld. The tokens and discs are of a cheaper quality, and the items themselves seem to be painted craft store blocks. This really doesn't affect the game much, though, and the items are different enough in shape and size to easily distinguish. Some of the shapes are more difficult to grab than others, but that's all part of the fun! The game itself is stored in a snap-shut plastic container, which isn't my first choice for a game, but does an okay job of keeping everything together.

2.) Rules: The rules are included on two sides of a sheet of paper and spend much of the time talking about the "rules of engagement", which is a good thing - because you won't believe the arguments that will come up. There's also a basic chopstick tutorial for those like me who can't wrap their mind around the usage of chopsticks. The game itself is very intuitive and only takes a minute or less to explain, and people will be diving into it with glee.

3.) Expert vs. Novice: You probably will assume that someone who is good with chopsticks will destroy someone who is an amateur, and you might be right. Living in Korea, I tested the game with some of the best chopstick maneuvers I know; but even they were bested sometimes by a player slightly clumsier with the chopsticks. In fact, when I put three expert chopstick users in a game and then three amateur users, I really couldn't tell much of a difference, the frenzy occurred either way.

4.) Players: The rules talk about two or three players, but in reality, the game can be played with much larger groups - players simply take turns. I was able to set up a quick fifteen minute tournament for a large group of teenagers; and they all had a blast, even when not playing, because this game is truly a spectator sport.

5.) Fun Factor: There's no real strategy in this game, it's just "grab the shape now!" and a fast and wild dexterity game. The rules even allow a shape accidentally going into a bowl as counting. More than once I've seen players fighting, and the piece accidentally flies into the air, landing in a player's bowl. This causes great hilarity, as does the grim look on players' faces when two of them have their chopsticks clutching the same piece, with one false move giving it to the other player. I personally found the three player games more interesting; because when three people are grabbing for the same item, it makes it that much funnier!

In reality, I guess this is a game that anyone could have thought of and perhaps has been played on an unofficial level between kids with chopsticks. But the shapes included are a good mix, and the game makes for a wacky, silly time. If you're looking for a silly dexterity game to bring out at parties, or something to use with teenagers that will produced laughs and excitement, then Chopstick Dexterity MegaChallenge 3000 is a safe bet - I've never seen it played without laughter included.