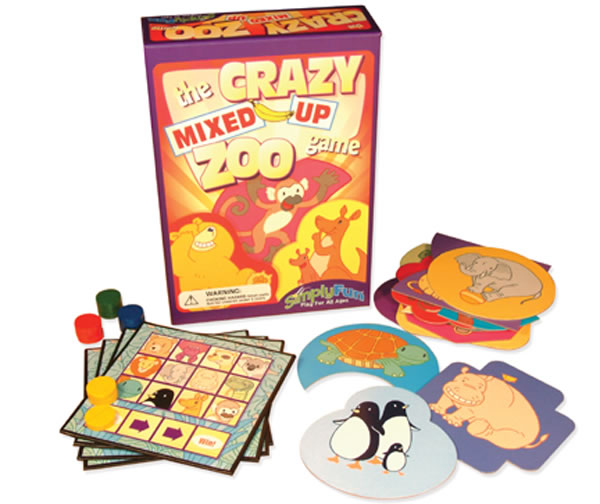 I'm always on the lookout for games to play with my young children, while avoiding the dross that is so readily available in mass-market stores. Fortunately, there are piles of excellent games for children, but many times they are smaller, unnoticeable affairs. The Crazy Mixed Up Zoo Game (SimplyFun, 2006 - Peter Sarrett & Michael Adams), is a game that has such wonderful pieces and bright, cheery colors that kids naturally gravitate towards it. My daughter asks to play it all the time, because it just looks fun!

And the game is fun, mostly for children. It's at its heart a memory game and uses position, color, and shape to help kids notice changes. It comes with great components, including a magnetic board, and would be a wonderful addition to any household with a very young child, four years old or older. It's certainly not a game that adults will play, although they can compete against kids at an equal level - something that helps keep the game from getting tedious.

Twelve animal tiles come with the game, each in a different geometric shape, with a different animal on them. The tiles are two-sided, with each side showing a different depiction of the animal shown. Players decide how many of the animals to use (five or more) and place them on the table; and each player takes a magnetic board, which shows each of the twelve animals. Players place a magnet on the scoring track of their board and take two others, preparing for the first round. The player who best makes a monkey sound goes first, with play proceeding clockwise around the table.

On a player's turn, all other players must avert their heads and close their eyes. The player then chooses two of the animal tiles and exchanges their places on the table, flipping them at the same time. They place their two magnets on their board to show which animals were switched, and then hide their board from the other players. Simultaneously, all other players look at the board and place their magnets on their board on the faces of the two animals that they think were switched. After everyone has guessed, the player who switched reveals their board. Each player who guessed correctly moves their scoring piece one space on the track; if no one guessed correctly, the player who switched gets to move their piece.

Play passes to the next person and continues until one player reaches the final space on their track (three) - at which time they win. That's it!

1.) Components: It's really a very beautiful, colorful game. The box itself has a vinyl finish and holds all the chunky, high quality pieces well. The tiles are large, about the size of a child's hand, and show big cartoonish illustrations of animals. The illustrations vary slightly from side to side: for example the kangaroo is by herself on one side and has a joey in her pocket on the other. This helps differentiate for those who are color blind, but the colors will more likely help those who aren't - one side of the kangaroo is yellow, the other is pink. Each tile is in a unique shape, from a circle to a moon, to a cloud. The player boards are easy to handle, and the wooden magnets attach to them easily. I can't emphasize how nice the components are; it's easily in the running for the top children's games I own, bits-wise.

2.) Rules: Well, you can look above and see how short the rules are. The three page rulebook that SimplyFun included is really nice but has to be filled with color pictures and examples to flesh it out. My six year old daughter picked the game up in an instant, while my four year old took a bit longer to figure it out.

3.) Ages: The game may not impress those who are ten or older, even though the difficulty can be increased. But for those in the kindergarten through second grade age range, the Crazy Mixed Up Zoo will delight, not just because of the pictures and sturdy components, but because they will be thrilled about the memory concept, something they will excel at. My daughter can regularly beat me at the game, even with me attempting - simply because she has a better memory than I.

4.) Difficulty: You can add or subtract animals to change the difficulty - Melody and I found that using all twelve was the best for us, while my younger daughter needed to play with only five. Players can also mix up the animals each time - something I recommend; otherwise, the game becomes too easy. Again, for the four year olds, this probably isn't the best idea.

5.) Fun Factor: I'm playing a game that my kids love, and that I find somewhat enjoyable (though I wouldn't play it on my own). That's enough fun factor for me!

Don't purchase the Crazy Mixed Up Zoo Game for its components alone, although they are incredible and will certainly add to the appeal for young children. Don't purchase the game if you are planning to play it with your local game group, they will laugh you into the street. But if you have young children, you are doing yourself a disservice if you DON'T pick this up, as it will bring many hours of happiness to them, and that is true fun. Hearing my kids giggle in joy makes the game a definite addition to my collection.


You can purchase the game here and you can read more of Tom's game reviews here.