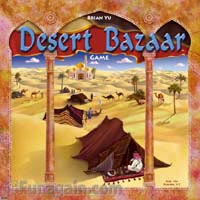 One time, a reader wrote me and asked if I used my own opinions when writing a review. They went on to ask if I ever reviewed a game that I disliked but thought that many others would enjoy. Well, the fact of the matter is that ALL of my reviews are my own opinion, and people can take that as they will. As for games that I personally did not enjoy, yet I think that many folk will - Desert Bazaar (Mattel, 2006 - Brian Yu) is an excellent example. I recommend the game to others but found that it certainly wasn't to my tastes.

When I looked at the game, all of it makes sense - the rules and tactics mesh together to make a mathematical mosaic of something that I, a math lover, should enjoy. Yet I found the game soulless and lifeless with too much analysis and too little payoff. Luck is a little too potent at some points, and players who want more than just theme will be sorely disappointed. I have a hard time putting my finger exactly on why I'm not a fan of the game, but I think it comes down to the fact that the game is more like work than it is fun.

A board that is a grid of hexagons is placed on the table, and each player takes seven tent markers of their color, placing a matching score marker on the "0" spot of the scoring track. Piles of Resource cards (silk - purple, camel - red, spice - green, and water - blue) are placed in four stacks on the board. Each player rolls three dice, which have the four colors on one side, a "wild" on the fifth, and a desert (nothing) on the sixth - three times each. They take matching resources that match the sides on the dice. Wild dice allow a player to take any matching resource; desert sides are re-rolled. A pile of tent tiles are placed face down next to the board, and eight of them are placed - four on each side - of the board. Each tent tile is one of the four resource colors and has a flag that is three colors (i.e. purple-blue-purple, or red-green-blue). The youngest player goes first, and then play passes clockwise around the table.

On a player's turn, they have two choices, to either roll for additional resources, or to build tents. If rolling, the player first draws one resource card of their choice, and then rolls the three resource dice. Players may only take one resource type, even if they roll more of one of each kind. Deserts count as nothing, while wilds count as anything. A player may gamble and keep one die, re-rolling the rest. However, a player MUST match the face of the die set aside, or they lose their entire roll. Players have no limit on the amount of cards they can hold in their hand.

When building, players choose one of the two sets of four tent tiles to build from. A built tent tile can be placed on any unoccupied space, even those that are next to other tents. Tents that are placed next to each other form an encampment, although no encampment may grow larger than seven tiles. Once an encampment reaches seven tiles, all the spaces around it can no longer be built in. To build a tent, a player must pay its "cost" - the three colors in the flag. So, if a flag is purple-red-purple, I must pay two silk cards and one camel card to build it. A player must place one of their control markers on the tent they build. If a tent is placed next to another tent, and that tent matches one of the colors on the flag, the player need not play that resource. In fact, a player can place a tent for free if placed next to three tents that match the colors shown on its flag. Players can build as many tent tiles as they want each turn - but only from one side. If a player builds all four tiles, they may replenish and continue if possible. After building, a player must replenish all tiles on that side.

Whenever a player places a tent tile that touches no other tiles, they score two points. Otherwise, a player doesn't score points until an encampment is completely finished. At that point, the player who plays the last tile in the encampment scores one point, then each player receives one point per tile they control in that encampment, removing their scoring markers. The game continues until there are no more legal places to place tents, and then players receive one point for each tent marker they have on the board. The player who has the most of each type of resource card scores two points, with nothing awarded for ties. The player with the most points at this point is the winner!

1.) Components: As one of the largest toy manufacturers in the world, I expect high things from Mattel, and they certainly deliver. Everything has a vinyl finish, from the cards to the board to the tiles to the rules! The scoring pieces and marker are made of translucent plastic, which is slightly odd, considering the Middle East trading theme of the game; but they do look nice. The board, a hexagonal shape itself, folds into four sections and fits nicely (as do all the pieces) in the plastic insert in the thin, square box. The dice are of decent quality, although the stickers on them got slightly scuffed in my version.

2.) Rules: With four pages of rules, there are many color illustrations and examples, and everything is very clearly laid out. When reduced to simple turn mechanics, the game is very simple; as a player has two options, each with three steps. The scoring is something that new players will continually ask about, but they will quickly understand the concepts of the game - especially the placement of the tent tiles, which is very intuitive.

3.) Resource Rolling: This is something that sounded slightly interesting in the rules, but actually I found to be fairly frustrating in practice. A player who rolls one red and two desert tiles is going to be annoyed when the next person rolls two wilds and a purple. I know that this is slightly mitigated by the fact that a person can take a resource of their choosing at the beginning of this phase; but in reality, I've seen players lose simply because they didn't roll as well as the next player. Having a lot of resources is critical to doing well in the game.

4.) Tent building: This mechanic I actually found interesting and refreshing. I like the fact that players get two points for building a tent by itself, but only one if it's part of an encampment. However, it is much cheaper to build tiles in an encampment, and a good player can get a chain reaction going to build three or more on a single turn. The only problem with this is that players often have several dozen choices of how to place their tents, and the dreaded "analysis paralysis" can set in. Sometimes I don't have a problem with people taking a while to think on their turn; but in this game, it can be rather painful, especially if you simply roll the dice on your turn, then wait five minutes while Bob takes an agonizingly long time figuring out where to place his tent tiles. This combined with the fact that there is a huge board change between turns in a four or five player game makes me suggest to play this simply with two players.

5.) Endgame: Frankly, I really don't understand why the rules give two points to the player who has the most resources of each type. In practice, this causes players to hoard cards near the end, hoping to have the most. The game doesn't end until someone builds the last tent(s) needed to fill up the board; and therefore, if everyone is rolling to draw cards, the end of the game becomes a boring, drawn-out affair. In one game, everyone was doing fairly evenly, and we rolled and drew cards until there were none left in the piles. This was a horrible and extremely unsatisfactory conclusion to the game.

6.) Points: The above situation is caused by the fact that the game gives very few points, and that most games I've played in have close scores. Players cannot afford to make any mistakes, and a bad roll of the dice or a non-optimal placement can ruin their chances of winning.

7.) Fun Factor: I said at the beginning that I couldn't put my finger on why I didn't like the game; but as I typed the last several paragraphs, I listed several reasons. Too few points, lengthy pauses during the game, too much luck during rolling, and non-intuitive game play just don't do much for me. Some people will enjoy the puzzle-type nature of placing the tiles and not mind the die rolling, but I just couldn't deal with the odd mix.

I'm extremely glad that Mattel is attempting to produce high quality, well designed games - and they've done a good job with this one and Voltage. I feel that Desert Bazaar will have an audience - perhaps with older folk with more time on their hands - who really enjoy the deeper, thought provoking gameplay. But I find that when taken seriously, Desert Bazaar became a frustrating, arduous task that just was too long to be enjoyable, and therefore not a game I enjoy. I'll leave the enjoyment up to others.