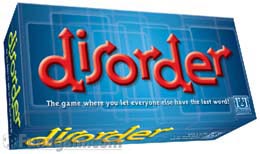 I'm always anxious to play new games from R & R, as they've made some tremendous games - such as Time's Up and Smarty Party. I had no idea what Disorder (R&R Games, 2006 - Frank DiLorenzo) was about but was ready to dive into it, as soon as I first got it. After reading the rules, though, I knew that I had seen the game somewhere before. So I dug up one of my old party game idea books and found a very similar word game for two players. But considering some of the best games around (i.e. Time's Up) have come from public domain games, I was certainly willing to give it a try.

As a two player game, Disorder is a very thought provoking challenge between two minds, as players use their wits to form words and outthink the other player. It's a game that almost requires players of fairly equal language skills and seems to work best with only two players. The basic game is interesting enough for me, while the action cards add a bit too much chaos to a game that really doesn't need any. Disorder is not a laugh out loud game but rather a game in which players thoughtfully attempt to outmaneuver each other. It's not one that I would play with everyone, but anyone who enjoys word games would probably be a fan.

A deck of cards is shuffled and seven are dealt to each player. Cards have a letter of the alphabet on one side with a corresponding number (the lesser the frequency of the letter in the English language, the higher the point value.) The other side of each card is basically a "wild" card. A long thin board with ten spots for cards is placed on the table, and the game begins. The youngest player goes first, and then play continues around the table.

On a player's turn, they simply choose a card from their hand and place it on the board, then draw a card from the draw pile to replace it. The first player can place a card anywhere in the row, but the following players should place cards either to the right or left of cards already on the board. Players can either play cards face up or face down. The board is used only as a placement piece, and cards can be shuffled up and down the row as play requires.

The catch is this - as players place cards down, they must clearly be part of a word. For example, I can play an "A" next to an "X", as those two letters can form a word; but "J" cannot be placed next to an "X", unless I can state a word that can be made with those two letters. A card placed with its "Wild" side up can be used for any letter. After the fourth letter has been placed, any player can, instead of playing a card, challenge the player who last played a card. When a player is challenged, they must immediately name the word that they were in the process of spelling out. Of example, if I placed a card that left "S*ND" on the board, and someone challenged me - I could say that I was spelling "Sandwich". However, even though that is a legal word, I would lose the challenge - because "Sand" is a word; and any player who finishes a word loses a challenge. I would also lose the challenge if I couldn't think of any legal word.

However, if I could name a legal word that was not yet finished, then I would win the challenge. Regardless of who wins, the winner of the challenge receives points equal to those face up on the cards, with "wild" cards counting as "1" point. After the challenge, all cards are discarded; and the person who lost gets to start the next word. Play continues until one player gains either fifty or one hundred points, depending on what length game the players wish to play.

1.) Components: The game comes in a long, thin box, with a nice plastic insert that holds all the pieces well. The board is very nice with a spectrum of colors ranging across each space. The spaces are raised a bit so that the cards nestle down into them, keeping them from moving; and although they don't do too tremendous of a job, it still is better than nothing. The cards themselves are nicely colored, although the sides seem to wear easily; and the cards are curved in such a way that they don't really lay flat on the board when placed face down. The chips, however, are of high quality - thick plastic discs of various colors and denominations - that are fun to hold and use.

2.) Rules: The rules are printed on two sides of a single sheet of blue paper with white font. Really, I found them difficult to read in this format - especially with the font that small. Once I did read them, I was easily able to understand the game, but part of that was because I had already played the free version before. I was able to teach the game, but it took an example or two to properly explain the rules.

3.) Bluffing: There is a tremendous amount of thinking required when playing this game. Most of it occurs when another player places a card down, and you can't figure out at all just what word they are spelling. It's certainly possible that they are simply putting letters down randomly with no word in mind (I certainly have done this!), but also quite possible that they have a word in mind that you can't think of. The latter is most often the case, but the fact that someone can bluff certainly adds to the decision to challenge someone.

4.) Players: I mentioned above that the game is best with two players, and I stand by that statement, although I could be convinced to play with three players. With more, there simply is too much happening between your turns, and there isn't much you can do if other players are constantly challenging one another without getting involved yourself. I just find that the game becomes quite the mental workout when two players are involved, as they seek to think of words that the other won't generate.

5.) Knowledge / Strategy: There is some strategy in the game, as players seek to build long words that will end on another player's turn, rather than their own. But really, it simply comes down to the fact that players are delving into their mental dictionaries to come up with words that their opponents won't think of. Yes, there is some bluffing in the game - and I enjoy that, as it keeps the game from simply being one of pure mind database comparison. But a person with a larger vocabulary has a distinct advantage, so players should be of equal ability here, or one player will walk away with the victory easily.

6.) Action cards: I'm glad that the game included action cards, because I think some people will really enjoy them. At the same time, I'd just as soon not use them in a game, because the player who receives them often has a large advantage over the other players, and they can add chaos to a game that really doesn't need any. The "Squeeze" card is probably my favorite of the bunch, as it can be used in a clever way; but the others just don't really excite me.

7.) Fun Factor: Disorder is fun for me in the same way that a paper logic puzzle is fun - it tests my mind and makes me use my thinking and memory skills. There's very little talking in this game, except to call out another player in a challenge or to yell in annoyance when you realize that the other player was bluffing / thought of a word you should have known! For me, the game was most enjoyable going up against a person of equal skills, to see which of us could outmaneuver the other.

If you like word games and puzzles, then Disorder is probably a good choice for you. Yes, the game could most likely be played with a pencil and paper, although the letter availability with the cards is a much better idea. Disorder is a game that I can play thoughtfully with my wife as a mental challenge, and we'll both have a lot of fun. But it's not the type of game I'd bring to my gaming group, or challenge my teens with - it's more of a puzzle than a game. An interesting and two-player puzzle, to be sure - just limitations on when and where it can be played.