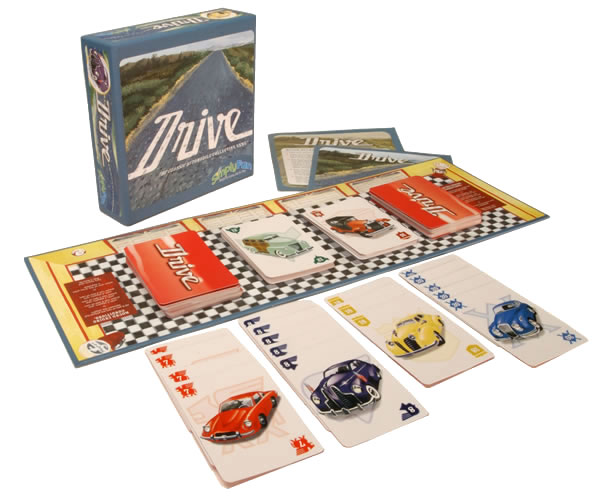 Every once in a while, my wife and I play a two player game that instantly grabs us, one we want to play continuously and often. Lost Cities was the first such game, and over the years, a few have followed. The latest in this rare group is Drive (SimplyFun, 2005 - Michael Schacht). I expected the game to be simple and easy from reading the rules but wasn't expecting a game quite so much fun and easy.

What really impressed me was how well the game scaled. While not at its best with four players, Drive worked well with four, great with three, and superb with two. It's fun and left me with the same feeling I usually get from an excellent game from the Kosmos two-player line. Drive is a reprint of Crazy Chicken; and while the funny theme may be gone, the simple, elegant gameplay is not. It's a tremendous social game for me, as you simply draw cards then play them, giving players a lot of time for casual conversation.

A deck of 110 cards is shuffled, and three are dealt to each player. Each card shows an antique car, along with that car's corresponding number. The number (6, 7, 8, 9, 12, 14, 16, 18, or 20) indicates not only how many points that car is worth, but the amount of cards in the deck of that type. The remainder of the cards are divided into two equal draw piles and placed on two draw pile spaces on a thin board. There are also two discard pile spaces on the board. The player closest to age sixteen goes first, and then play proceeds clockwise.

On a player's turn, they draw the top card from two different piles (two cards total). They then have two choices. They can either discard one card from their hand to either of the discard piles. Or, they can play a collection of cars from their hand.
- Players can play only one collection a turn.
- There must be two or more cars of the same type to be a collection.
- If another player has already played a collection of that type of car, the player must play at least one more car card than the previous player.
- If a player plays a collection that is the same type and larger than another player's, the player with the smaller collection must discard their entire set to one of the discard piles.

This continues until either all nine type of cars are in collections on the table, until one player has collected a certain amount of collections (depends on who's playing), or until one of the two draw decks runs out. Each player then receives points for each collection of cars that they have. The number on the card collection equals the points they receive (i.e. If I have 6 "20" cars in a collection, I still only receive twenty points). All the cards are shuffled together, and a new round begins. After three rounds, the player with the most points is the winner!

1.) Components: The cars on the cards are nicely drawn, each in a different color, having a different symbol, and a different value. Anyone can easily tell them apart. The cards are of extremely high quality and fit easily in the plastic insert in the small, square box. The board, just as in Lost Cities, is mostly superfluous, but it does help give the game a thematic overtone (it looks like a 50's garage) and helps players remember how many piles there are. These are nice components for a very simple game.

2.) Rules: As with all SimplyFun games, there is a page of quick rules - from which I think that a player could easily learn the game. If that doesn't work, there are six pages of fully colored, fully illustrated rules. Everything is very easy to understand, I've taught the game to over a dozen people, and all of them - from teenagers to adults, almost instantly grasped both the rules and the strategy.

3.) SimplyFun: For those who don't know, SimplyFun games are sold via parties and demonstrations at people's homes, via a representative. Of all the SimplyFun games I've played so far, this one is by far my favorite, and the one that my wife and I most enjoy as a "couple" game.

4.) Players: As stated, I extremely enjoy this game as a two player affair. In fact, my wife and can easily modify the number of rounds, because even only one round of the game is fairly satisfying. The game is also quite good with three, although it is slightly more chaotic. If I discard a card, hoping to get it back in a future turn, my chances go down drastically with more than two players. Still, even in a four player game I've had a very enjoyable experience; so while I prefer it with two, I'll gladly play it with three or four.

5.) Strategy: It's hard to put the strategy into words for a game this simple - it's mostly about keeping cards in your hand and playing them at the right moment. Should players concentrate on smaller car sets, since they won't be stolen quite as easily? Or should they concentrate on the large car sets, which tend to go back and forth between the players often, but bring in a much larger reward at the end of the round? And how long should a player hold sets of cards in their hand? And what cards should they discard? I know that I keep comparing the game to Lost Cities, but it's almost the same kind of decisions in this game. People may initially think that it's a rummy variant (because of the sets), but it's nothing like Rummy - simply a set collecting game.

6.) Fun Factor: It's a lot of fun to steal a collection from another person or lay down the 7 "20"s in your hand that you've been hoarding for several turns. But the main reason I enjoy Drive is because players can lounge and just make conversation as they play the game. Yes, there are tactical decisions, but they don't require much thought; and the energy a player expends can be put into socialization.

Drive certainly feels like a Reiner Knizia game - a cross between Spy and Lost Cities. But it's a different game, and Mr. Schacht has done a terrific job in designing a game that plays like it belongs in the Kosmos two-player line, but also accommodates up to four people. I've tried the game out in my board game club and have seen three different sets of four kids intently playing the game multiple times - it displaced many other games at the club - they kept asking to try it again. If you have a chance to go to (or better yet, host) a SimplyFun party, put this on your "must-have" list - it's a great game that works extremely well for couples.