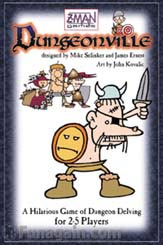 With the stereotypical images that are often conjured when a group of folks get together to go dungeon delving in a role playing game, it seems simply natural that a game parodying the entire genre would be produced. Once of these games has achieved a certain degree of popularity - Munchkin, although there are many, including myself, who believe the fun in that game vanishes after only a play or two. When I first saw Dungeonville (Z-man Games, 2005 - James Ernest and Mike Selinker), the artwork seemed to indicate that it was similar to Munchkin. This was because both games feature the delightful caricatures of John Kovalic of Dork Tower fame.

I've noticed that Dungeonville doesn't really get a lot of positive press on the internet. Part of that is because the game reminds many of Munchkin - at least in theme and art style. However, I believe that it is more because the game has mechanics that sound rather interesting yet fall short of final expectations. When played with the right expectations, I am looking for a game that has some interesting choices yet still remains as a light, enjoyable experience. The theme relies mostly on the artwork and names; and while the components are a bit lackluster, I find the game amusing in small doses. I don't mind having a game that parodies the whole dungeon delving experience - and this is the one.

Five dungeon cards (Crypt, Rathaus, Ice Cave, Goblin Camp, and the Dragon's Lair) are placed on the table, each with a corresponding deck of thirty-two room cards. Another deck of Adventurer cards is shuffled and placed face down on the board. Five town cards are placed on the board, each with a different price at the bottom - starting with the Street (0 gold) to the Tavern (40 gold). Each player is secretly dealt one deed card to one of the five dungeons, with any leftover dungeons placed at a Deed House card. Each player takes a pawn and "blood" tokens of their color, and one player (the blood thirstiest) is chosen to go first - given the Seeing Stone card. The first round is ready to begin.

The Adventurer cards have several items of information on them. There is the name and picture of the adventurer, their class (minstrel, henchman, gnome, etc.), their color (blue, green, brown, tan, no color), their rank (from 1 to 64), and their usefulness in each of the five dungeons (rated from "A" to "E"). At the beginning of the game five of the adventurers are turned face up and sorted by rank, placing the highest one at the Street, and continuing in descending order to the Tavern. Each player is given a mock amount of forty gold and takes turns recruiting characters for their team. When a character is bought from one of the five locations, a new character is flipped over, and the cards are adjusted accordingly. This continues until each player has three characters, and the game starts.

The first phase of each round is Recruitment, in which players with less than three characters can recruit new characters by paying gold that they've found in the dungeons, or simply taking free ones from the Street. After this, players decide during the Reconnaissance phase which of the five dungeons they are going to send their party to and place their token on them in turn order. If two or more players go to the same dungeon, then combat occurs. Each player chooses three of their adventurers, and places them face down in some order. Players then simultaneously turn over each of the three characters - with the player showing the lower rank (the stronger character) winning the battle by killing the opponent. If the killed character is the same color as the attacking character, the winning player recruits him to his party instead. Otherwise, the dead character is discarded, and the winning player receives one blood token from the other. After combat, the player with the most survivors is the one that explores the dungeon. Players who go to a dungeon alone may take their entire party in.

When exploring a dungeon, the player turns over the top card of that dungeon. Most of the cards have a letter on them, from "A" to "E"; there are ten "E" cards, seven "D" cards, five "C" cards, four "B" cards, and three "A" cards. The player checks each of their adventurer skill value for that particular dungeon. If any of the adventurers value is the same letter as the card flipped, then one of these adventurers must immediately die. They are discarded, and the player places one of their blood tokens on the dungeon. Then, regardless to whether or not someone died, the player may take the card for its treasure value (five to twenty-five gold). The card drawn may also be an item card, which can be equipped on an adventurer with the matching class. For example, The Footsoldier's Shield allows any Footsoldier to be substituted whenever another adventurer dies in a dungeon.

If a character dies, or the player draws an item, they must draw another card. Otherwise, they may "escape" the dungeon, taking their characters and their loot. Sadly, a player may only take loot equal to the total amount of their player's rank. (i.e. Dean Cranberry, who is ranked ten, can only carry ten gold.) Once a player escapes a dungeon (or their party is wiped out), the next player takes their exploration turn, until all players have gone. Players keep their gold which they can spend on recruitment in future rounds.

There are a few other rules, such as a player paying fifty gold to change the deed to their dungeon, or some of the characters (such as the Assassin and Jester) having special rules - but that's basically it. Once one player has collected seven blood tokens, between those collected from other players, and those of other players on their dungeon (their own tokens on their own dungeon are subtracted from their score), they win the game!

Some comments on the game:.

1.) Components: First of all, I'm a very big fan of John Kovalic's artwork, and considering the humorous theme of the game, it really does work well here. I wish there was artwork on the treasure cards, but the character cards will have to content me. Speaking of cards, there are quite a few in the game, and all of them are of good quality, with easy-to-read formatting. The pawn and tokens are less than spectacular, with the pawn being rather generic and the tokens simple cardboard discs of a color. Everything fits easily in the small box, and the game takes only a short time to set up.

2.) Rules: The rules come on both sides of a sheet of paper and are fairly easy to understand, even though no examples are included. Still, I've had no trouble teaching the game to others, even teenagers - with the only exception that a few players have trouble wrapping their minds around the concept that a great dungeon delver equals a pathetic fighter, and that their best fighters are easily picked off in dungeons.

3.) Adventurers: Actually, even though it doesn't always make perfect sense, I do enjoy the system of "best fighter = horrible in dungeons". It keeps one player from dominating the game; because even though they might decimate an opponent's party, they're likely to get destroyed in the dungeons. For example, the Assassin, who is the most powerful in player combat (he has a rank of "1"), has an "E" in every dungeon category, meaning that he has an almost 1/3 chance of dying every adventure. I also enjoy the character parody names, the artwork, and how most of the dungeon world is lampooned.

4.) Combat: Player combat actually sounds more interesting than it really is. You can usually see, before actually playing, just who is going to win each fight; and it's often only a question of whether or not the loser will draw any blood or not. Now mind you, that's important, because every blood token counts at the end of the game; but it's just not as exciting, as I hoped. There are a few surprises, and it's always great to capture an opponent's character for your party, but it's often more dumb luck than anything else. I will say, however, that combat is quick (I won't say painless) and doesn't bog down the game, like it does in the games that Dungeonville parodies.

5.) Time and Fun Factor: Munchkin would probably be a much more enjoyable game, if it was over quickly. Dungeonville would probably be a much more teeth-grinding game, if it took longer to play. As it is, the length, which can be as short as twenty minutes, keeps it entertaining without wearing on one's nerves. I enjoy it for the short span we play, and the names and gameplay are laugh-inducing. It's funny to watch someone's party get wiped out in a dungeon, even if it was simply pure luck.

6.) Luck: Players who don't like luck will probably not enjoy the game too much, even though there is some strategy in who one buys at the auction, and where a player goes for their dungeon. The idea of having a "hidden" dungeon sounds entertaining, but it's usually quite simple to figure out which dungeon someone else owns - there's really not much of a point to adventuring in your own dungeon. Players can pick the dungeon for which their characters seem best prepared and still get decimated, however overall - the stats seem to even out.

I'm not going to give this game a hearty thumbs up of approval, since the appearance of strategy is mostly an allusion. Yet, I can't disregard the game either, since it did make me laugh; and I was definitely not opposed to playing it more than once. It's like a joke that I can hear once or twice a year, and laugh each time. More than that, and the humor starts to wear; but in moderation, Dungeonville can be a funny parody for those immersed in the RPG culture.