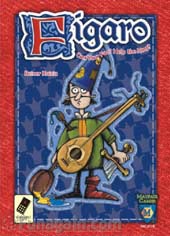 "The king is desperate! The whole court is attending the joust, and no one is working in the castle. The king really needs a helper!" Enter Figaro (Mayfair and daVinci Games, 2006 - Reiner Knizia), the lunatic idiot working for the King. Apparently he is attempting to do all the jobs of court, and making a mess of them. This card game simulates (in the loosest possible use of that term) his ludicrous efforts.

In reality, this means that up to six players are basically playing a "take that" game, in which they attempt to stick other players with the wrath of the King. An interesting (yet ultimately dull) mechanic is used to determine this - and some odd, superfluous road pieces are included for scoring. When used with youth, this game had some real potential, but I found that it was uninspired and just nothing special with adults. I'm certainly not opposed to games in which players attempt to mess each other up with direct card play, but Figaro just didn't stand out enough to be interesting.

A bag of road pieces is mixed up, and several are drawn out at the beginning of each of the three rounds in a game (the total drawn is equal to the number of players minus one.) For example, in a six player game, we would draw fifteen road tiles and place them in three groups of five - for each of the three rounds; placing the roads in order from longest to shortest (they are all of a different size). A deck of cards is shuffled and evenly dealt to each of the players. Cards are numbered from "1" to "3" and are in one of five suits (painting - purple, cooking - orange, music - green, fighting - red, and magic - blue). There are also five "ring-around-the-rosey" cards, and five "jester" (wild) cards that are either "1" or "2" value. One player is chosen to go first (and is given a king token), and then play continues clockwise around the table.

On a player's turn, they must choose one card form their hand and play it face up in front of any player, even themselves. The first card in front of a player may be any color; after that, all cards played must be either the same color or a "wild" card. A player also has the option of playing one of the "ring-around-the-rosey" cards, which causes players to pass all face up cards in front of them to the player on their left.

After the third round, players line up their road pieces next to a castle wall token, and the player with the shortest road is the winner! (closest to the King). The King token is used to break ties.
Some comments on the game:

1.) Components: Figaro is set in the same universe as "King Me!" and, thus, has the same cartoonish style of artwork. Each card is well designed with background color and suit symbol, as well as a funny picture of Figaro doing something idiotic, such as almost shooting the king with an arrow, or playing horrible music. One card even has Figaro painting the king's portrait - only it looks like Reiner Knizia! The road pieces are also nice cardboard tiles and fit easily in the included cloth bag. The king token is a cardboard counter that stands upright in a wooden base. Everything fits (rattles around) in a sturdy smallish box with more artwork of poor Figaro.

2.) Rules: There is only one sheet of rules with pictures of components included. They do a decent job explaining the rules, considering how simple the game is. When teaching the game, the concept came across as a little odd for some players but still was easy, once they got into the groove. Once players understood the game was basically a "take that" type of game, everything clicked.

3.) "Take that": There is some strategy, but I put a heavy emphasis on the word "some", as the game is essentially one of hoping that the other players don't gang up on you. A player can get extremely lucky and have some "ring-around-the-rosey" cards to shuffle off a pile of cards in front of them to someone else, but the game is about making sure the person in the lead gets a lot of cards. There is really nothing you can do if the other players decide to take you down, and I found that frustrating. Sometimes I don't mind such interaction, such as in the game Family Business, but the card laying in Figaro gave a semblance of strategy that really was disrupted by the "hurt the leader" concept.

4.) Strategy? At first, I really thought the concept of playing cards, even in front of yourself, was slightly odd. Then, I realized that it could lead to some interesting strategies. One could play a card in front of them of a color that they had seen other players play quite a bit of, hoping that there wasn't enough left to give them a total of "6" in front of them. But after many playings, this simply doesn't work. Table talk and wild cards rule the day; and players will simply play cards on whoever they feel like, following only the restrictions on the board.

5.) Last round: I've played the game several times and have yet to see the person who has the fewest cards in the third round NOT win. They get to replace their longest road with the shortest one from the third pile of roads and not take a new one. Honestly, unless there are some rather odd circumstances, this means that the player will easily win the game. So why play the first two rounds?

6.) Fun Factor: I won't deny that the game is fast enough to be fun for people seeking mindless enjoyment. However, it just wasn't really there for me. I wanted to see my strategy have an effect on gameplay, and I watched as players simply piled up cards on one person. I also found that the futile nature of the first two rounds was a bit offsetting. On the flipside, the teenagers I taught the game to had a blast, although I suspect they wouldn't miss the game if I never brought it again.

I have to wonder if Figaro would have been published if Reiner Knizia hadn't designed it. It's the sort of game that has the spark of a good idea but simply settled down to be just another slightly dull card game. I love the humorous artwork, and the idea of the game is certainly interesting; but neither these things, nor the name of the designer, are enough to make me recommend the game.