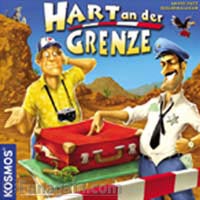 There are a few games that, when I first read about them on the internet, I immediately know that I'm going to like them. When I heard about actual smuggling cards inside small metal suitcases, I knew that Hart an der Grenze (Kosmos, 2006 - Andre Zatz and Sergio Halaban) was a game I would enjoy. The name, translated "Right at the Border", has players attempting to sneak different goods across the border, while taking turns as the border Sheriff. Bribery and theft run amuck, and the game comes with six little metal briefcases - something that catches everyone's eye when I first open the box.

Hart an der Grenze has really become a smash hit with the folks I play with. The game might be called by some "overproduced" (and it is!); the translated rules are slightly unclear, and it might last a little too long. Regardless, it is extremely fun as players attempt to bluff their way to financial success, while trying to catch others in the act. Lots of laughing, wailing, and a bit of role-playing make it a party game - one that has some interesting mechanics in it but is mostly all about the experience and the bluffing.

Each player in the game takes a small metal suitcase, as well as thirty dollars - with the remainder of the money placed in the "bank". Players receive one red "seizure" marker and an "extra inspection" marker in a five or six player game. A deck of 139 goods cards is shuffled, and five are dealt to each player.
Each card is one of six goods, with a sell price and a penalty / remuneration number.
- Jugs: 2/1 (legal)
- Maracas: 3/2 (legal)
- Sombreros: 4/3 (legal)
- Cigars: 7/5 (illegal)
- Tequila: 9/6 (illegal)
- Idols: 12/8 (illegal)
The game takes place over three rounds, and each player is Sheriff once (in clockwise order) each round.

On a turn, players secretly place a number of cards into their briefcase, and then - in turn order - declare what they have in their suitcase. Players may only declare one type of good, and it must be one of the three legal types. (i.e. "I have three Maracas"). After all players have declared, the Sheriff picks one player to open their suitcase (they may pick two players if they use their "extra inspection" marker). The player who is picked can either reveal the contents of their suitcase or attempt to bribe the sheriff. If bribing, they offer the sheriff an amount of cash which can be negotiated. The sheriff has the option of taking this amount, which means the player does not have to open their suitcase. If the player does have to (or chooses to) open their suitcase, they reveal the contents. If the cards in the suitcase match what they declared, they receive money equal to the total of the remuneration numbers. (A shame this doesn't happen in real life!) If the cards do not match, the players must pay an amount equal to the penalty number on each card that wasn't part of their declaration. Also, the Sheriff may play their "seizure" marker and look at the contents of any one player's suitcase, keeping all the ones that do not match that player's declaration.

After this, each player takes their goods cards and places them in a pile behind their suitcases, without showing them to the other players. Every player's hand is refilled to five cards. The next player becomes the Sheriff, and this continues until all players have been the Sheriff once - at which point the round ends. Players then look through the pile of cards behind their suitcases and choose up to three of these to place face-down underneath their suitcase. The remainder they sell at face value, discarding the cards and taking the appropriate amount of cash. Everyone counts their money, and the poorest player decides who the starting Sheriff for the next round is.

This continues until three entire rounds have been played. At this point, players have up to nine cards under their suitcases. Each of the six item types is called off, and players lay any cards they have in front of them. A certain number of the cards is sold off (amount determined by the number of players), starting with the player who has the most cards of that type for double the normal value. Some players may not make any money at this point, if they don't have the most and the number to be sold has already been reached. Players then add this money to money that they've made during the game, and the player with the most money is the winner!

1.) Components: Hart an der Grenze comes in a large, square box - probably entirely too big for the game but the size needed for the metal suitcases. Speaking of these suitcases, they probably aren't needed for the game; but they add so much flavor, fun, and functionality (alliteration - hurrah!) that I can't imagine it without them. The cards and box are of good quality, showing a cartoonish type of artwork that works well with the game's silly theme. I only have two quibbles concerning the components. One is that paper money is really inferior to coins, etc. - especially with as much as it is tossed around in this game. I replaced mine with poker chips. Secondly, the act of placing cards under the suitcase is a little awkward - another compartment would have been nice. I do like the reference card included, and the one inside the lid of each player's suitcase. The components add to the quality of the game, especially the theme.

2.) Rules: The game is currently only available in German, but an English copy of the rules can be found online. There were a couple of problems that I needed to be solved; but after the designer clarified them for me, I realized that the rules weren't too bad (although they could use a little reworking). Teaching the game is actually rather simple, with one small difficulty - not all players understand the selling cards for double at the end of the game. I show an example of final scoring and selling that is rather helpful; but, still, many players don't "get it," until after one game has been completed.

3.) Bluffing: There is no denying it - this game is all about the bluffing. Players must simply hope that their facial expressions and other visual and audio clues don't give away what cards they really put into their suitcase. One could simply always tell the truth, but that's a.) unprofitable and b.) often impossible - especially if you have a hand of illegal goods. Players must determine what they think they can sneak by the sheriff. Anytime someone declares that they have five goods of one type; everyone always wonders if they are either telling the straight truth or trying to pull off a brazen bluff. A player, of course, must deal with the cards that they draw, but a good bluffer can cause others to check their suitcases when they are telling the truth and ignore them when lying. An interesting problem might develop for some, as you can really only determine when a player is bluffing between rounds, since cards are kept secret until then. We played a variant in which players revealed their cards every round, adding a bit of laughing and finger pointing.

4.) Role-playing. "Sir, I'm going to have to check your suitcase." "I realize that, officer, but I'm in a hurry. And look, you appear to have dropped this five dollar bill?" "Sir, I'd like to help you, but I have sixteen children to care for at home. Five dollars simply isn't enough." When you start hearing statements like this in a game, accompanied by cheesy accents and quotes from bad movies, then you know that you're playing Hart an der Grenze the correct way. This may add a bit of time to the game, but it makes negotiations fun and interesting and adds a lot of laughter.

5.) Double or nothing: The end game is really rather important, and I've seen many players win the game because of it. Players have to realize that they have an excellent opportunity to sell things for double value instead of the ordinary rate, but they also might get nothing for their troubles. When only two idols are going to be sold (in a four player game), and I have one, but Billy has two; he is walking away with forty-eight dollars and I with nothing. This adds a bit of tension, and possibly, a bit of real "game" to Hart an der Grenze. Sometimes I feel as if Hart is actually two different games - the bluffing and the "bidding" at the end.

6.) Fun Factor: Players who despise bluffing should most likely stay away, since they will find nothing here that interests them. BUT, it is possible that the way the game is presented, allowing a bit of role-playing and light easy fun, will entice and snare them. For people who enjoy or tolerate bluffing, I can think of few games that are as enjoyable as Hart an der Grenze. One player in one of my games kept repeating the phrase "This is a really fun game!" over and over again, as he continually did poorly.

And that's the joy of this game. Even when a player can't catch other's bluff or fool the other players, they can still have a blast. From confiscating a suitcase with valuable contraband inside, to selling the most sombreros for double price at the end of the game, to making the Sheriff think you are lying when you are simply trying to take home some legal goods, this game just reeks of delight. Certainly a light game - one that is best at parties or when the time is getting late - it's nice to see a game that isn't focused on the mechanics, but rather on just having a good time.