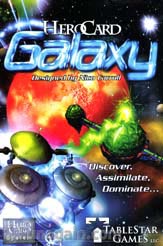 The first four games from TableStar are unique in the fact that they all have the same basic "HeroCard" engine - a card dueling game that becomes the backbone for four very different board games. This is an intriguing idea, and I was very pleased to see the good quality of components from this new company - especially the themes of each game. I've played three of the games: Rise of the Shogun (samurai), Champion of New Olympia (superheroes), and HeroCard: Galaxy (TableStar Games, 2006 - Nico Carroll). The thing that drew me to Galaxy was not only the theme (I do love space games), but also the stunning artwork - artwork that certainly evokes the theme of a galactic, cosmic struggle.

HeroCard Galaxy is an average game, mixing a very neat HeroCard dueling system with a galaxy control board game. Players are attempting to capture enough planets to win the game, winning them from other players, fighting battles to do so. A few clever variations on the HeroCard theme, such as allowing upgrades to decks, make this game stand out - and I enjoyed playing it, although not as much as Rise of the Shogun. Gameplay is a little longer than I would like, and the rules are slightly obtuse; but those looking for an interesting space combat game might enjoy it.

Before I talk about the game, let me explain the HeroCard engine. Each player takes a deck of cards to represent their Space Commander hero. Interestingly, players can use decks from the other games (i.e. I can use a Shogun deck in the Galaxy game); and other than some theme clashing, they work fairly well. Three Attribute cards are included with each deck to represent the player's Body, Mind, and Attribute "X". These cards have a number on them that ranges from "3" to "10", showing the character's strength in those skills. The rest of the cards in a deck are "Action" cards and are associated with one of the three types of skills. Cards are Fast (play whenever you want); Restricted (play on your own turn); and Exclusive (play on your turn - limit of one.) Players arrange their attribute cards on the table.

In a duel, a player has four phases. They first discard as many cards as they want to from their hand, then draw up to three more - not exceeding seven. After this, players "clear" up to three cards that they've played on the table, placing them in their discard pile. At this point, the player takes their one exclusive action and as many restricted actions as they can.

Most exclusive actions are attacks. The player must play one "Base" attack card and as many attack modifiers as they wish. However, each card played has a cost in one of the three attribute types. As a player plays a card, they place it on the table, where it stays until cleared. The total cost of all cards on the table cannot exceed the number of the attribute. Therefore, players who play many cards have fewer options available to them on turns. The player being attacked then may play one "Base" block and as many Block modifiers as they have room for, still making sure they stay within their attribute limits. Both players may continue to add modifiers until they have no more or decide to play no more. If the attacker's total is higher, then they "hit" the opponent; otherwise, play passes to the next player.

Now, to combine this with the main game: Each player selects a Hero pawn and takes the corresponding action deck, setting them up in front of them. A game board is placed on the table next to two decks of cards - Discovery and Technology. The top three Discovery cards are placed face up, revealing planets, in three numbered "Discovery Queue" spaces, and one player is chosen to go first.

On a player's turn, they first discard, draw, and clear cards in the same manner as a duel. They then take one Exclusive action, as many restricted actions as they want, and move once.
- Move: A player may move from any of the four discovery spaces on the board to any planet that a player has in their "Control Row", etc. There are some restrictions on how far a player may move, depending on their initial location.
- Discover (Restricted): If a player's hero is on an empty discovery space, they may place the first planet in the Discovery queue into that place, drawing another planet, and moving them accordingly.
- Claim (Exclusive): A player may claim a planet if they begin their action phase alone on that planet. The player takes the planet and places it in their "Control Row", along with the hero.
- Garrison (Restricted): A player may place cards from their hand under one of their planets that their hero occupies. Any cards may be placed face down here, but only "Fast" actions will actually be able to be used.
- Attack (Exclusive): A player may attempt to capture an opponent's planet by attacking it. This is done by fighting a duel - attempting to expel the opponent's hero from the planet. If a player does not have their hero on a planet that is attacked, they may use cards from their garrison (if any) to defend. Captured planets are placed in the attacker's Control Row.
- Technology (Exclusive): A player may draw four technology cards, keeping two and placing the other two at the bottom of the deck. Technology cards are either action cards that can be used and then kept in a player's action deck to customize it a bit, or are garrison cards used to defend a planet.

1.) Components: As I mentioned in my intro, I really enjoyed the space artwork all over the box, board, and cards. From the very evocative planet cards to the flashy cards of the EGG alien, everything has a wondrous and alien feel to it, making you really believe you're playing a space game. The hero tokens are hard, durable plastic; and the board, while not exactly necessary, is useful for tying all the cards on the table together. Everything fits easily in the smallish, sturdy box.

2.) Rules: The twenty-six page rulebook is split into three sections: a Quick start section, the rules for the actual board game, and a section that simply goes over the Duel rules. There are several examples and full color illustrations; but while I found the game fairly easy to understand, the rulebook was slightly obtuse when explaining how to play the game. Even with the reference cards and sheets, not everything was as clear as it could be. The use of the terms "restricted" and "exclusive" is not very intuitive and, perhaps, could have been better used in the sense of the game. When teaching the game, I find it easiest to simply play a duel with new players first - just so they understand that - then move onto the board game. Duels are very easy, and the game is just a step up above that - easy for teenagers and adults alike - although a good teacher is necessary.

3.) Duels: Since the duels are an integral part of the game, they better be good; and I'm happy to report that they are quite fun. If a player overextends themselves on an attack, they will have little leeway to defend against an attack; so one must be careful. You can clear three cards each turn, which is a great number, because it's useful; but a player isn't always able to get rid of the cards they want to. The decks seem to be extremely well balanced; although I haven't tried the space and hero decks in the game, it would be too big of a breach of theme for me. Two decks are included with the game - the Cosmic Cult and the Mechagen, while the EGG and the Crab races are added in expansion packs. The decks are different numerically but aren't too far apart in gameplay - at least until technology shows up.

4.) Technology: For me, one of the most interesting features of the game was the technology deck. A player could add some potentially cheap, powerful cards to their action deck, allowing them to take more fast and restricted actions. At the same time, a player who simply concentrates on technology each turn will be sadly defeated by other players who focus on expansion and conquering. A balance must be struck, but the technological option allows players some neat customization of their decks.

5.) Strategy: The many options a player has on a turn are interesting, and they must decide whether to seek out new planets, claim some already discovered, research technology, or attack the other players. All of this is good and works together well. The only problem that I could see with this is that all of this seems to take a long time to accomplish. Since a player can really only do one major action a turn, they must wait until the other players go until they follow up on that. Moving in for an attack is something everyone can see, and the speed of space really isn't represented in the game.

7.) Fun Factor: The game certainly does feel like a space game but, perhaps, isn't injected with enough theme to be a favorite of those looking for a space epic. The mechanics are interesting, but it almost feels sometimes like two different games are included in the box, the duels and a rummy-like planet collection. I found the game enjoyable but was in the minority when I played the game - mostly because of its length. People would have enjoyed the game had it been shorter and slightly easier to grasp.

TableStar Games has really done a unique thing here, making their games compatible with one another, yet giving each a distinct, unique feel. While Galaxy isn't the best game of the series - that would be Rise of the Shogun - it does a decent job of bringing a space theme to the gaming table. Granted, much of that is dependant on the artwork and the clever dueling combat, while the length of the game and the slight mishmash of mechanics may bog it down for some. HeroCard: Galaxy certainly is a "try-before-you-buy" game, as it's difficult to truly understand what's going on until you play it.