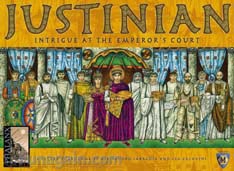 I was very pleased when Justinian: Intrigue at the Emperor's Court (Phalanx and Mayfair Games, 2006 - Allessandro Saragosa and Leo Colovini) arrived, because it was on the exact day that I was teaching about the Byzantine emperor. I showed it to my class, announcing that this was exactly what we were talking about, even including other major players of that era, such as Belisarius. Of course, I also noticed that Mr. Colovini's name was on the box, so I was quite prepared to have a pasted-on theme, as that is his forte. Still, the bits were fantastic looking, and the rules sounded interesting; so I wasn't as worried as I might normally be when trying a new Colovini game.

And I'm certainly glad I played the game; for while it really is about mechanics, they are interesting and enjoyable. The game might be a smidgen too long for what it is; but I enjoyed it tremendously, as I attempted to out bluff other players as we sought to get our advisors closer to Justinian. The sliding tiles on the board were not only functional, but also a fascinating mechanic, which were unique to this game. It's perhaps too numerical and abstract for some, and others won't enjoy the bluffing; but I found it to be a clever design; one that I will seek to play often.

The game consists of a large board that contains the twelve advisors to Justinian. Each of these advisors is a large tile that is placed in numerical order on the board, with three holes punched in them to reveal three numbers underneath. Each advisor has their three holes in a different location, and the numbers in each of the twelve slots are different. For example, the twenty numbers under the first advisor range from "1" to "21", while those under the twelfth advisor range from "25" to "75". Because of the way the holes are spaced out, the first advisor (although they start lowest) has the opportunity to show the most points. Each player places a token of their color on a separate scoring board and then takes twenty-two influence tokens of their color. These tokens show numbers from "1" to "3", either in black (positive) or red (negative). Ten of the influence tokens are randomly drawn and placed face up in front of a player behind a shield. The other twelve are placed face down in front of the shield. Four decks of cards, differentiated by color, are shuffled and placed on the table. Each player draws two of the cards from each deck and keeps them secret. The cards correspond to one of the twelve advisors. One player is chosen to begin the game, and the first (of three) phases is ready to begin. Each phase is one or more rounds, until the end of the phase is triggered.

On a player's turn, they may simply place one of their influence tokens face down -either above one of the twelve advisors or on the scoring board in a box, marking the current phase. A player can choose to pass, which means that they draw two of their reserve tokens, placing them behind their screen - and then wait out the remainder of that round. When placing influence tokens on characters, players may place them over any character they wish; but advisers may only have a maximum of three tiles placed on them. After all players have passed, the round ends; and all influence tokens are turned face up. The player who passed last moves the characters, deciding whether to start from left to right. When each character is moved, the sum total of the numbers on him/her (remember, red numbers are negative) is the amount of spaces the character moves, shuffling all the other characters accordingly. After the characters are moved, all influence tokens on them are removed from the game.

After each round, it is possible that a scoring round is triggered, depending on the amount of influence any one player has placed on the game phase card (here red numbers and black numbers are both positive). If any player has placed a minimum of five points, they can declare a scoring round. All players turn their influence counters on the game phase card face up, and the player with the most influence determines which color will score points this phase. All other players score victory points equal to the sum of their influence there. Then, each player reveals the cards that match the color declared by the player and score points equal to the number showing in the slot matching the current game phase. Players then discard the cards of that color and may choose to exchange one of their remaining color cards with a different one from the deck.

Another round then begins, starting a new phase if a scoring round just occurred. Phases two and three are the same as the first round, except that eight points is required to score the second round and twelve points for the third. The third and final scoring round can also be triggered by players using up all of their scoring tokens. After the final scoring round, the player with the most points is the winner!

1.) Components: The artwork in the game is austere and certainly looks like it was imported directly out of the Middle Ages. All of the components are high quality as is typical of a phalanx game. The shields are perhaps a little more flimsy than I would have liked, but only slightly. The advisor tiles are very large and easy to maneuver and slide nicely along the upper part of the board. The numbers are clear and match the high quality cards easily. Everything fits inside a plastic insert inside a long, sturdy box.

2.) Rules: The four pages of rules are fairly easy to decipher; for while they have small print, they are very well organized and repeat important parts quite often. The game gives the appearance of being a complicated one; but in reality, the rules are quite simple and easy. Most people quickly grasp the sliding tile concept, and I found the game easy to teach and learn.

3.) Sliding and Bluffing: To me, the coolest and most important feature of the game is the sliding of the advisors. Players are of course going to move the advisors that they have in their hand; and if a player is lucky enough to have the same advisor more than one time in different colors, they will definitely attempt to move that advisor up. The fact that the influence tokens are both positive and negative keep the other players guessing. Just because I put two tokens on Constantinus doesn't necessarily mean that I want him to succeed; in fact, I might want him to move down so that my favorites move up. I found that moving people down often was more effective than moving other people up, but at the same time had to be careful that other players weren't moving my preferential advisors downwards. One thing that is emphasized in the rules but doesn't become evident until the game is played is that the last player to pass decides the order (right to left, or left to right) in which the advisors are scored. This is rather critical, because it may directly affect a few advisors, causing them to move more or less - possibly not at all. At the same time, the player who passes last is using up more of their influence tiles. I enjoy this balance, and watching where other players place their tiles is a fun exercise in attempting to read their minds. Just which advisors are they pushing?

4.) Scoring Rounds: A player can effectively force a scoring round if they wish, but they must use up many of their valuable influence tiles to do so. The game has a clever mechanic in that the player with the most influence picks the color but doesn't score points for their influence tokens on the game phase card. Now, usually this doesn't cause much of a choice. It's extremely critical to pick the color, as you will pick the color that has the two advisors that will bring you the most points. At the same time, it adds a bit of balance to the game and makes you think a bit about throwing influence onto the game phase card.

5.) Fun Factor: The game really only consists of a few elements, placing influence tokens and shuffling the advisors back and forth. This might cause some to find the game a bit lacking, as it doesn't seem to have a lot of strategy options. However, I found that the game was enough fun without this, as all of the bluffing and attempts to maneuver advisors is the key of the game. Those who despise blind bidding (what you could probably call the placing of influence tiles in this game) might be unhappy, but for those of us who like to outguess our opponents, this is an enjoyable exercise.

Okay, the theme is really just some nice wrapping paper around a few mechanics, but at least it's different and nicely historical! But unlike most Colovini games, the lack of theme doesn't cause the game to be as dry as I thought. The game is an exercise in bluffing and placing your tiles expediently. I found it quite enjoyable and unique enough to warrant several playings. Games can be awfully close or end up in large point swings. While this may be frustrating to some, it is simply evident that some players were smoother with their tile placement. Let's try it again; maybe this time I'll win!