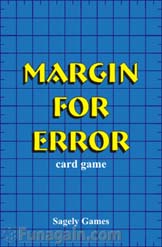 On the onset, Margin for Error (Sagely Games, 2006 - Dean Seiji) looked rather unassuming. It's a trick taking game with rather plain looking cards in a plain looking box. Reading the rules didn't really do much more for me, as it looked like an unimaginative, typical trick-taking game. But I've seen games that didn't look like much before become rather good, and I'm always in the mood for a new trick-taking game, so I gave it a shot.

And I have to say that with four players, Margin for Error is a well-executed, clever trick-taking game. It has elements of other games, notably Hearts, and despite its simplicity allows for some bluffing, some interesting partner communication, and is rather satisfying. I enjoy trick-taking partnership games; and although I think the five player version is slightly odd, I enjoy the four player game tremendously.

The deck of cards is made up of four suits (blue, yellow, green, and red), numbered from "1" to "14". For each round of the game, these are shuffled, and fourteen cards are dealt to each of the players. After looking at and sorting their cards, the dealer decides whether he wants to be the Captain, or pass. If he declines, the next player in clockwise order gets to decide, and so on. If all four players pass, then the dealer MUST be the Captain. The Captain decides which of the four suits will be the point suit for the round and then decides on his strategy.

The Captain is either going to attempt the High Goal (gain ten or more point cards) or the Low Goal (gain four or less point cards). He chooses from the two corresponding cards and passes it to his partner, to alert them what the goal is. The Captain then passes three cards to his partner, who after looking at them, passes three different cards back. The other pair does the same thing but with two cards. The round is then ready to begin.

The player with the Green "1" leads off, unless Green cards are the point cards, in which case the Blue "1" leads off. In this trick, as in all following, players must play a card that is the same color as the card that is led. If they have no card of the leading color, then they may play any card they like. The winner of a trick is the player who plays the highest card of the suit that was led (there is no "trump"). That player then plays the leading card of the next trick, etc.

No player may lead off with the point trick, unless it is "broken" - a player plays it as a following card in another trick. After either five point cards have been taken by one partnership or seven tricks have been played, the Goal card is turned over and revealed to their opponents, after which the round is played out. At the end of the round, if the Captain's team met their goal, they receive fifteen points. If the round ended in a tie (The Captain's team takes five point cards with a low goal, or nine cards with the high goal) then neither team receive points. Otherwise, the opposing team scores ten points.

The next player becomes the dealer, and another round begins. The game continues until one team has sixty points, at which point they win. Rules for the five player game are similar, except that a single player can win, since partnerships change each round.

1.) Components: Even though I enjoyed the game, I'm still not terribly impressed with the components. The small blue box is rather mundane, and the cards themselves simply have the numbers on them in the color of the suit, as well as a word (i.e. "blue") that states the color. I don't think that there needs to be a huge pizzazz involved with a game's production; but since the game is awfully close to a regular deck of cards (only a difference of four), I would think that there would be a bit more involved. Still, the cards are functional and easy to tell apart.

2.) Rules: The rules are on eight small pages, and clearly and quickly explain how to play the game. I understood how to play after only a quick reading, and it was fairly easy to explain (although the players kept asking "Just like Hearts?", etc.), as I went. It actually took a round for some players to finally understand, but it's a fairly simple game.

3.) High Goal / Low Goal: It certainly seems to me that the Low Goal is much more attainable than the High Goal. When you have a handful of cards in one color, it's easy to pick the High Goal; but just because you have very few cards of a color doesn't make the Low Goal accessible, since your partner may have all the cards needed. Once we figured out exactly how the game went, the Low Goal was very rarely picked. Still, it's possible, and the opponents are still left guessing.

4.) Guessing: Which goal have my opponents picked? This is my favorite part of the game, as both sets of partners jab back and forth, with the Captain and his partner trying not to reveal their goal too early, and the other set of partners attempting to figure it out. The Captain's opponents should "break" the point suit early, attempting to see if the Captain and Co. will take the cards or not. Halfway through, the goal card is revealed, but that might be too late for the opponents. This makes the game considerably different from Hearts, because a player may attempt to either take points or give them to the others. It makes for an interesting dynamic and separates Margin for Error from other trick taking games.

5.) Fun Factor: Much of the fun in this game comes not from completing the goal, but from spoiling the goal of the Captain - at least for me! I enjoy first trying to figure out what the goal is, then trying to mess it up. This was such an enjoyment that players often passed on being the Captain. In fact, the burden of the game lays on the Captain and his partner, and players will often pass the ability unless they are completely confident they can do it.

6.) Passing: There is a bit of communication between partners in the cards that are passed. The Captain's partner can tell the Captain how many cards they have of a certain color, etc. At the same time, the cards passed can perhaps rid a player of one color (allowing them to "break" the point suit faster) or give high cards to their opponents.

Margin for Error is a simple game, and one that will most likely appeal to those who play trick-taking games. I'm not sure it's the best introductory game for the genre, but it is enjoyable and easy to learn. The guessing of the goal and then trying to complete/foil it is the best part of the game, and this sets Margin apart from other card games.


BoardGameGeek entry for Margin for Error