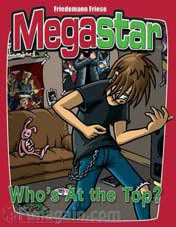 I never know what to expect from a Friedemann Friese game, as they often have strange themes, but he usually makes a very interesting game with unique mechanics. Megastar (Mayfair Games, 2006 - Friedemann Friese) is one of his newest card games; and while the theme actually makes perfect sense (players are attempting to play the best songs on their radio stations), the game mechanics are familiar, yet still unique. Players are attempting to influence the popularity of songs, while attempting to have the most songs of that type on their station.

I enjoyed the card game quite a bit, even though some players I tried it out with just didn't quite "get it" until the game was over. It's simple enough on the onset, and players have to make choices on which cards to keep, and which to use - making those cards more valuable. You can watch the songs go up and down in popularity over the course of the game, and I found this to be an enjoyable game - one that takes about thirty minutes and has a lot more "meat" than initially might appear. You initially might think that you have no control over the game, but that's merely a clever disguise, as the players who soundly beat you will attest.

Seven cards are placed in a vertical line on the table - each representing a different band or musical artist, differentiated by color and picture. This is the "hit parade", and the highest card is the number one song at this point in time. Eighty-four band cards are shuffled (twelve for each band), and eleven of them are laid face up on the right of the hit parade, in the "requests". These cards are organized together in groups by artist, then each player is dealt five cards from the deck. Players choose one card and place it face-down in front of them, and the player with the largest CD collection takes the first turn, with play proceeding clockwise around the table. Depending on the number of players, not all the bands may be used, and a certain number of cards are removed from the deck.

On a player's turn, they first reveal the face down card in front of them, placing it to the left ("music market") of the hit parade. The player then draws any card of their choice from the music market, adding it to their hand, as well as the top card from the draw deck. They then choose one card from their hand and place it face down in front of them. Play then passes to the next player.

Whenever a band has three requests, or all cards from the music market are drawn, a "countdown" is triggered. Starting with the number one band, each band moves up the hit parade one space for each card in the "requests" area. This means that the top card doesn't actually move upwards, but will most likely move down. The cards in the request area are then moved to the music market, and play continues. The game continues until the last card is drawn from the deck, at which point all players play their final face down card for a final possible 'countdown".

1.) Components: The card game comes in a small box with a lid (which pops off occasionally), and a picture of a deranged teen playing an air guitar. That artwork is typical of that shown on the band cards, although each one is a stereotype of a popular (or once popular) artist. The cards themselves are of good quality - the hit parade cards showing a CD cover of the band, and the band cards showing the same picture and color, as well as a symbol to help keep them separate.

2.) Rules: The rules are on two sides of a long sheet of paper that folds up easily in the box. They are printed vertically, for some reason - it's actually a bit annoying - but have color illustrations and examples. The game itself is very simple, but people have a hard time figuring out which card to throw down, and several new players play randomly for a while, because they have a hard time figuring out what bands are going to do well.

3.) Control and Strategy: At first, I wondered myself if the game suffered from a lack of control, as it seems that the hit parade moves around a bit randomly. But really, players have a good deal of knowledge about what is going to happen. Every time there is a countdown, the # 1 song is going to go down - it's fairly inevitable. And players can play three cards on the song that they want to go up - but at the same time, risking the fact that they'll have no cards for that song at the end of the game. In my first game, I worked with all my effort to get one artist to the top of the list, and almost succeeded (they were # 2). I then realized that I simply didn't have any cards left in my hand for that artist! As I played them, and countdowns occurred, other players picked them up into their hands, and I was left with nothing to show from it. The "recycling" method of cards is really a nifty mechanic, as any cards used to move a band are then available for other players; but if they are ignored, they can be grabbed by the player themselves.

4.) Time and Players: With three players, the most control is available in the game, since your turn comes up so quickly; but I found the game enjoyable even with five. Classified as a "filler", I will agree somewhat; as the game certainly looks and feels like one, taking only a little over half an hour. But I really think that it's deeper than first appearances.

5.) Fun Factor: To increase a band, you must play cards from your hand; but to have points for that band, you must have its cards in your hand. This is the dilemma that keeps the game interesting and fun; and I also enjoyed watching the hit parade shuffle around, as a result of the cards I and my fellow players placed down. Once you realize that you DO control the outcome of Megastar, the fun factor increases tremendously.

Megastar is a unique card game that forces players to make tough decisions, with an eye out on the end of the game. Players have a direct say in how the parade cards move up and down and can exercise a decent amount of control over the outcome of the game. There is some luck in the draw, but it's mostly mitigated by players drawing cards from the music market, and watching how other players play their cards. If you're looking for a unique and meaty card game, Megastar is one that may surprise you!