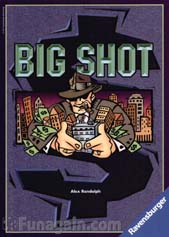 Packaging a CD with a game is nothing new - Quest of the Dragonlords added the instructions for their game on CD, and a few other games have followed suit. Mr. Big Shot (Mr. Big Shot, Inc., 2003 - Courtney Tudor) however, comes with a CD version of the game included. So when purchasing it, you actually get both a computer game and a board game. Now, I'm not sure that I'd ever purchase the computer game on its own, as I rarely buy computer games; but it was pretty neat to get two games in one.

Mr. Big Shot is about the ups and downs of the stock market, and the investing involved. There are a lot of statistics included in the game, but the game is much more lucky than anything else. Now normally I despise the amount of luck that is present in a game such as this, but it was so much fun I didn't mind. Basically the game is a giant game of "chicken", where each player must decide when to stop investing. Everyone holds their breath during each turn, and there is a lot of yelling and screaming. For larger groups of people (6-8) who are looking for a party type game, this is an excellent choice - it's fun, and involves everyone on each turn. The computer game is also a nice touch, and the whole package is fairly affordable. In this review, I'll go over the board game in detail, mentioning the computer game only in passing.

A board showing a skyscraper with ten floors - each made up of ten spaces - is placed in the middle of the table. Each player takes a token and places it on the 100K space - the first of a track leading to the 1000K winning spot. Each player takes two cards, one labeled "Big", and the other "Shot". A stack of game cards are shuffled and placed in the middle of the board, along with the "Crankulator." The game is then ready to begin.

One card is taken from the deck, and all players look at the information on the front side. A year is shown, as well as the statistics for two different companies, known simply as either "Big" or "Shot." The statistics include the prices of the company's shares during the year, sales, ratings, etc. There is also a short description of the company's products (i.e. Engine parts, Piston rings), and a sentence about the company's projected growth. All players read the info (or not), and then pick either the "Big" card or the "Shot" card, placing it face down in front of them to indicate what company they are investing in. All cards are revealed simultaneously, and then the game card is slid into the crankulator, so that the back of it (which is hidden to the normal eye) can be read through a special window.

The card is pulled through until players can see the results of the first quarter. Both companies will cause a player to go forward or back a number of spaces on the board. Each player has the choice to either "Sell" (move the amount of spaces on the card), or "Hold" (ignore the result and hope for a better one in a future quarter.) The card is then slid until quarter two is shown, with the same options, then quarters three and four. After quarter four, players have no option but to sell, and must move their pieces the spaces indicated.

If a player is on a space that has a small "2" or "4", they can attempt to double or quadruple their spaces move but must announce this before the results are shown. If a player lands on an "elevator" space, they must roll two dice. If they roll two even numbers, they move up one "floor", if they roll two odd numbers, they move down one "floor", and if they roll one of each, they move forward two spaces. If a player is forced to go into the basement (by moving backwards from the start space), they skip one turn. The game is over either when one player reaches one million dollars, or after twelve turns, in which case the player with the most money is the winner!

The computer version is very similar, using money to track scores rather than spaces on a board. Players also invest any amount they'd like each turn, rather than the automatic $100,000 they do in the board game. Other than the fancy graphics and sound, those are the only differences.

1.) Components: The game comes in a nice, sturdy box, although it's a little too large - there's a lot of air sold with this game. The tokens are simply cardboard stand-ups of cartoonish people, but the board is very pretty and fairly easy to understand - although sometimes people got a little confused about which direction they were moving on the track. The game cards themselves have a lot of info on them, and thus must be passed around for everyone to see. The back of them have the answers in blue, with a "Mr. Big Shot Doesn't Cheat" phrase superimposed in red, so that you can't really read the answers (unless you're a massive cheat) until you view them through the special red window in the Crankulator. The Crankulator itself is simply a cardboard piece that the cards can be slid through - and actually works fairly well. The game has nice components, even if they are in too large of a box.

2.) Rules: The game has only two pages of rules (and a page of information about the stock data), as most party games do. They're simple and easy to understand, because the game can be taught in about one minute - it's that simplistic. I've played the game with many groups - with teenagers, with my classes, and with adults - and everyone understood the game quite easily.

3.) Class: In fact, I split my math classes up into teams and had each team decide which company to invest in, and when to pull out. Never before had they been so interested in the stock market. Of course, they didn't know or really care much about the companies and the years involved (each card reveals which actual companies' names were involved), but they had fun nevertheless. I was able to show how the stock market is a gamble, but that savvy investors can do a little better.

4.) Chicken: The game is all about selling out at the right time. It's such a cool feeling when you sell at 13F (thirteen spaces forward) in the third quarter and find that the fourth quarter is 6F. At the same time, you'll want to hit yourself in the forehead when you sell in the second quarter for 9F and find that the third quarter's shares went up to 18F! Also, when a company actually makes you move backward, do you get out while it's bad, or hope that it gets better near the end (and it might get worse!)? These are not rocket-science decisions, but they are a lot of fun, and everyone I've played with had had a lot of fun, regardless of whether they did well or not.

5.) Actual data: Actual data from different companies is used in the game, even if the names are withheld until after everyone has finished selling or holding. The designer of the game told me that people well-versed in the stock market don't do much better than random guessing, which is the point of the game, I think. All the data on the cards is pretty much gobbledygook to me, and I merely picked my companies based on their products. But it was fun, regardless.

6.) Fun Factor: This game has a very high fun factor. Yes, if you win, you've probably just gotten luckier than everyone else; but it's still satisfying, because it's your choices that have gotten you there. Some people won't like the extreme randomness of the game - but I had a blast, and it's continually asked for by my classes to be played.

7.) Computer version: As I said earlier, I wouldn't buy the computer version, because my computer game purchasing is very limited. But as it comes free packaged with the board game, what could I say? It's interesting; and while I won't get addicted to it, it makes for a good lark and allows one to play the game solo.

8.) Number of Players: There are only enough cards provided for six players, but we found that up to ten could play the game with the extra four players simply saying which company they were going to invest in. And all the players didn't add much time to the game at all, since everyone plays simultaneously.

Luck is an odd thing. In some games I despise it, because it gives me the feeling that I have no control over my destiny. But that's absolutely not true in Mr. Big Shot, as players have total control (with little to no knowledge, of course) over what happens to them. Does that make the game less fun? Not to me and those I've played with because we treated the game as a rowdy party game. And taken in that light, I think it's worth checking out, especially as you get a nice computer game in the process.