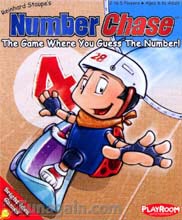 When reading feedback from the Dice Tower, one of the hottest topics revolves around games for kids. In fact, about once a week or so I get an email from someone who is looking for good, interesting games to play with their children. Invariably I will point them to the Bright Idea line of games from Playroom Entertainment. Each game in that series is interesting and fun for both adults and children and helps children build basic foundational skills for future game playing. Number Chase (Playroom Entertainment, 2006 - Reinhard Staupe) is yet another example of this educational enjoyment, helping kids work with both numbers and logic.

Now, before you turn away with a repugnant grunt, let me assure you that the game is actually fun and reminds me more than a little of the popular mass market Guess Who. Players are attempting to figure out the number picked by another player, using guessing and clues to narrow down exactly what the number is. The game is certainly challenging for the youngest set and extremely easy for the older set. But played in the confines of a family setting, Number Chase can be an entertaining activity.

Fifty cards are placed face down on the table - their backs showing the numbers from "1" to "50". The oldest player takes the first turn and writes a number down secretly on a piece of paper. The player to his left then points to one of the fifty numbers, guessing if it is the secret number. The writer must tell them "yes" or "no". If "no", the player turns the card over and reads the question on the back. There are several types of questions: (The "X" is replaced by a number).
- "Is the number greater than X?"
- "Is there an X in the number?"
- "Is the number in the range of X and Y?"
- "Is the number less than X?"
- "Is the number even/odd?"
- "Is it a one/two digit number?"
The writer must answer the question honestly, and then the next player takes their turn. Players must use the answers to deduce the number that the player wrote down. As soon as one player gets the writer to answer "yes" when they point to a number, they take the card as a point; and the game continues, with the player to the writer's left becoming the new writer. Everything is the same way, except another number is now missing from the configuration. The game continues until one player has collected three cards, at which point they are declared the winner!

1.) Components: The game is basically a deck of cards (paper and writing utensil need be supplied by the players). The cards are very thick, making them durable for hasty little fingers. The backs simply show a large number, and the fronts show a beetle-boy thing-a-ma-bob asking the clue. This creature gives the game a "childish" look and makes it a bit more than simply a math game. The cards are held in a cardboard insert in a small, sturdy box.

2.) Rules: If you noticed, I managed to fit the rules into a very small space above. The rulebook manages to stretch it out to four pages, using full color pictures and game examples. The game is extremely easy - adults will pick it up in twenty seconds; younger kids might take a bit longer.

3.) Guess Who?: A game I enjoyed quite a bit when I was a child was "Guess Who?". Number Chase, to me, is very similar to this game. In Guess Who you asked questions to eliminate suspects; in Number Chase you ask questions to eliminate numbers. Number Chase is a bit more restrictive, in that a player must ask the question on the back of the card, but that doesn't make the game any less fun. Alert players can even pick numbers with the question they want on the back - although that would take a lot of memorizing to remember which one was where.

4.) Deduction: For folks who enjoy deduction, this game will honestly be too simplistic. Most numbers can be figured out after only three or four questions. The game has some merit in becoming an interesting two player duel, but the burden lies on the asker of questions - not the person picking the number; it's like Mastermind in that regard. However, for children, this can be a most illuminating experience; as for the first time, they use the process of elimination to discover the target number. That alone is worth the purchase of the game.

5.) Fun Factor: Most of the fun in the game comes from the satisfaction of picking the right number. Occasionally, a person will even pick the correct number out of the blue, with no questions at all, and everybody laughs at their sheer luck. But as a two to five player game with your kids, this can be quite enjoyable; and you can help increase their number and logic awareness.

Without kids, I wouldn't recommend Number Chase at all; there are far better, more brain burning, and more satisfactory deduction games on the market. But when you toss a child into the mix, this is an excellent introduction to the genre; and it will help them with their numbers too. Looking back over the review, I see that I've talked more about the mathematical and logical benefits than anything else, but it is nice to have a game that teaches these skills that is also fun to play, and good looking. Bright Idea Games has another winner!