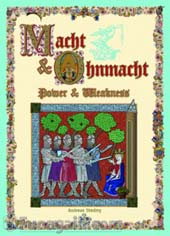 In my search for Power and Weakness (JKLM Games and FRED, 2007 - Andreas Steding), I noticed that it's the only game with the word "weakness" in the title. Yes, that's not an interesting fact, but really â€“ the game gave off this air of incredible boredom that resonated from the medieval artwork to the pasty colors. The fact that it was a two-player area control game was intriguing (something fairly difficult to achieve), but it also looked immensely abstract.

Power & Weakness is exactly what it looks like - an abstracted two-player area control game. It manages to feel like two distinct games being played at the same time, with some fairly detailed rules (the poorly written rulebook doesn't help much). I enjoyed the game; but I think the audience will be small, as it is a game that appeals to mostly die-hard gamers and is more difficult to grasp than most games of this genre. The theme is a bit bland (read: non-existent), yet it is very unique, and luck plays a very small role.

The board is a map of England in the fifth century, divided up into different regions. A colored disk (red, yellow, blue, and green) is randomly placed face up in each region. Piles of markers in each players' colors (orange and white) are placed in a central stock (cubes for knights and disks for magicians). Players take three of each into their reserves, and the first round is ready to begin. Rounds alternate between a magic cycle and sword cycle. During each cycle, one of the types of units is considered the "active" unit (knights during the sword cycle, magicians during the magic cycle), and the other is the "passive' unit.

At the start of each round, each player receives two active pieces. A time token is turned over (from "4" to "8"), and that many gray cubes are placed on a sundial picture. Action tiles are turned over (the same number as that of gray cubes, plus three) face up near the top of the board. The player who currently has the fewest victory points go first (ties are determined randomly).

On a player's turn, they have two actions that they can take (on the
first turn, a player has only one action).

The three tiles that can be auctioned off (which results in player's bidding secretly a number of their active pieces - the higher bidding player getting the tile but losing all of their bid pieces to the stock) are:

There are different tiles that a player can play on their turn. Some of them can instead be discarded to take two cubes and/or two magicians.

At the end of each turn, players count up their active regions (regions with more active pieces than passive pieces); and the player with more receives one victory point. Players then add their current victory points to the number of active regions they control. If this number meets or exceeds twelve, they win. Otherwise play goes to the next round.

1.) Components: The game's fifth century artwork will likely add theme for some, although I found it a bit drab and depressing. The pieces, on the other hand, were quite nice - I especially liked the contrast between white and orange. The tiles are of good quality, and each colored region tile has a different symbol to make them easily distinguishable. Everything fits easily into a small light blue box, although you'll certainly want bags to keep it from jumbling into a big mess. The board is good quality, and the territories on the maps are easy to distinguish from each other.

2.) Rules: The rules to the game are on nine pages and are actually better formatted than most JKLM games that I've played before. Still, they can be annoying at times, since many rules are only explained in one small place; and I found myself flipping all over the rulebook throughout our first game. Power and Weakness is NOT an easy game to teach, because the scoring is hard to digest, players take a bit to get acclimated to the difference between active and passive; and the two different phases can be confusing. There is definitely a learning game required before a new player truly understands what is going on - and even then that may not be enough. Two reference sheets are included, which are invaluable - don't play the game without them!

3.) Theme: The game is one of conflict in England during the fifth century - a time of great confusion and chaos. But nothing in the tiles and pieces really conveys that theme at all - even attacks are simply done by having a majority. Why can wizards go from one green territory to another, but they can't attack the region directly next to them? Mechanically the game makes sense, but I wanted to use the theme to help teach the game, which honestly isn't the most intuitive, and it just doesn't work very well.

4.) Active and Passive: The scoring is done in an interesting way, because a player can be getting hammered in one cycle but pull out the victory in the other. The cycles directly affect one another, because active pieces can still target defensive pieces; and a player gets most of their reinforcements in one cycle during the other. A player can decide to concentrate completely on one cycle. I think total concentration in this regard will lead to defeat, because there is a set number of pieces in the game, and a player can only get to a certain level of power. In some ways, the Magic cycle is more difficult, because there are likely fewer adjacent territories to each region. The only real difference between the cycles is the rules about adjacency, but it's enough to give them completely different courses of action.

5.) Auctions: It seems like every game these days requires some sort of auction, but they don't work too well in two player games. Here, however, it fits seamlessly into the game, because a player is bidding away pieces that they could use on the board. A canny player can also start an auction after they know the opponent can't compete. You can't ignore these tiles, because they can change the game completely - especially the rebellion tiles, which are often the only way to attack an impregnable territory.

6.) Tiles: The action tiles are likely the key to the game, as well as the only real luck factor involved with the game. If I'm intent on attacking a blue region, and that tile isn't available (or worse yet, my opponent takes it before I get a chance to), it's a tough time. Players also have the ability to save a pile of tiles, using them at one time to pull ahead. Tiles are the only way to move pieces, the only way to increase reinforcements of active pieces, and the only way to attack. And most importantly, using tiles takes the gray cubes off the timepiece, moving the round forward. A player who is doing poorly in one of the cycles will often attempt to do whatever they can to get the gray cubes off, to move to the cycle that they have more control in.

7.) Fun Factor: Some will find Power & Weakness too confusing to be fun. And indeed, if I want a simple yet enjoyable two player area control game, there are others - such as Dynasties - that are available. There are some fun moments in Power and Weakness, and they come usually as a result of several turns of setup. Players move their pieces into position, take the action tiles they need, and then attack. Fighting isn't as suspenseful as it could be, since there is no randomness involved, but the fun in the game comes from outmaneuvering the opponent. I enjoy Power and Weakness, because it's fascinating how the pieces in the two different cycles interact and affect one another. At the same time, the game feels like two separate duels, and players cannot completely ignore either one of them. The game is more complicated that I'm normally looking for when playing a two player game, and it's often difficult to tell who's winning until the end. All that being said, it is a satisfying experience to see one's plans succeed.

Yeah, that was a bunch of back-and-forth without any real conclusions, right? The best recommendation I can give you here is to read my rules summary and determine if it sounds interesting. Don't pick up Power & Weakness for simplicity or theme - neither is present. This is a game that will appeal to those who simply want to use game mechanics to outmaneuver each other.