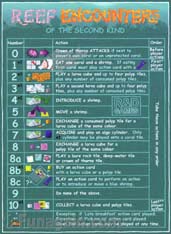 The more that I play Reef Encounter the more I'm impressed with what a deep, intriguing game it is. I have to say, though, that I was completely surprised by the fact that an expansion came out for the game. Not that I wasn't interested - I'm certainly a sucker for expansions - just that Reef Encounter is the type of game that didn't seem like it needed an expansion. However, I gladly tried out Reef Encounters of the Second Kind (R & D Games, 2006 - Richard Breese), since I'm such a sucker for expansions.

If you think that Reef Encounter was a perfect game, then probably you should avoid the expansion; as it adds some chaos and a lot of options to game play. However, once I played with the expansion, I don't want to go back - I love the added variety, and a bit "o chaos in games is certainly fine by me! This expansion adds only a little complexity - although perhaps enough to warrant leaving it out when teaching the basic game. Let's look at what the expansion adds.

1.) Box: Ok, nice enough, but I threw this out and just stored all the new pieces (tiles, cards, and rule sheet) in the original box. Easy enough.

2.) Rules: Seven full color pages with the new rules are included, with some clarifications from the previous rules included. Those who found the original rules obtuse won't be much happier here, though - I still had to read the crown of thorns section several times before grasping it. I would not include the expansion when teaching Reef Encounter to newcomers, but those versed in the game (including those who have only played it one time) will easily make the transition.

4.) Double polyp tiles: These tiles are just what I stated - double tiles, which count for end of the game scoring and the amount of tiles on the board. They do pose extra risk, however; because if consumed, they award the player who consumes them two tiles when used.

5.) Half polyp tiles: These tiles have a color polyp on two sides and rock on the other side. They are marked "1/2"; but that simply refers to the sides used, as they are worth full points at the end of the game. They can only be attacked or consumed from the colored sides and can even be placed adjacent to a reef of the same color. At first, I thought these tiles would be only partially useful; but in defense they became invaluable, and soon, I was happier to see one of them than the double and two-color tiles.

6.) Bare rock and Deep water: These tiles allowed a player to extend the rock or cancel part of it out, allowing them to form a protected reef or consume an opponent's reef more easily. They can be played for free and cancel each other out. They're certainly not as useful as the other new tiles (at least, I think so) but can really mess with an opponent's well laid plans and position.

7.) Crown of thorns: A powerful, powerful tile - so much so that a variant in the rules suggest that each player start with one. (I prefer to let them show up in the pool to be picked). These can be placed for free on any empty rock space for free on a player's turn. On each player's turn, before anything else happens - the crown of thorns will attack, move in and destroy one adjacent coral type controlled by the player whose turn it is. If that is not possible, then the crown of thorns will attack any adjacent uncontrolled tiles; otherwise, it does nothing. If at any point it is adjacent to no reef tiles, it is destroyed and removed from the game. Crown of thorns can even displace shrimp and split reefs into two or more pieces. They certainly add to the "nasty" factor of the game!

8.) Cards: To me, these are a big change in the game. On a player's turn, they may discard any one cube or tile (and it's almost always an unneeded tile - a great way to get rid of them!) to draw one card. This can only be done once per turn, and a player may have a maximum of three cards. Cards can be played only on a player's turn, unless the card itself indicates it. Examples of cards include:
- In the scoring at the end of the game, up to two of the yellow polyp tiles are worth one additional point each.
- A player can take their final action (take the tiles and cube) before taking the other actions.
- Perform a growth action without playing a larva cube.
- Take three tiles randomly from the bag.
- Take action two (placing up to two tiles on the board) before action one (eating a reef).
I've seen some claim that the cards add too much chaos and that they are most certainly not equal. And just looking at the ones that I've listed above, you might tend to agree. But really, they are all fairly useful - in the right situations. A player can change their tactics based on what cards they get, but you'd have to be crazy not to draw at least some of them. More than anything else, the cards change the game.

9.) Blue shrimp: A blue shrimp is placed on the board at the beginning of the game. When a player wishes to eat their first coral reef, they must discard a card with a blue shrimp to do so. Players may also discard a special card with the blue shrimp icon on it to place one of the four blue shrimps on a tile - protecting that tile only! There are also a few tiles with a blue shrimp imprinted on them doing the same thing. These blue shrimp are interesting, semi-useful, and act as a neutral barrier that any player can move. While they aren't the most important part of the game, they, combined with everything else, keep the game much more tactical and interesting.

The biggest change, other than the cards is the choices a player is now faced with when drawing tiles at the end of their turn. With all the special tiles, it's not as simple a choice as it once was. This might actually increase the analysis paralysis factor of the game, but I found that it wasn't so bad when playing with experienced players. (It did cause us to shuffle the bag more often, certainly). If you play Reef Encounter often and think that these changes would breathe new life into the game, then I would recommend it exceedingly. Don't jump into it lightly - while the changes seem simple, they really do make it feel like a whole new game. I personally would rather play with the expansion than without (as did my playtest group), but I certainly can see how some would feel that the game is no longer "pure". Still, it's a good bang for the buck (at least when Z-man Games comes out with their version), and it shows that Richard Breese is able to take an elegant design and expand on it in interesting ways.


BoardGameGeek entry for Reef Encounters of the Second Kind