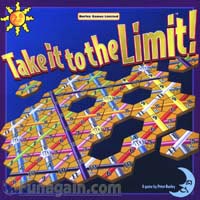 As a geometry teacher, I keep several logic puzzles in the classroom for the students to work on when they finish their work. One of the more popular types is the puzzles in which students must get a certain amount of pieces into one area, having none left over. These puzzles, simple-looking, can be rather devilish as it is often quite difficult to put the pieces in correctly. Take it to the Limit! (Burley Games, 2006 - Peter Burley), takes this puzzle idea and puts it into a game that is both mathematical and fiendishly clever.

Take it to the Limit! is an advanced version of Mr. Burley's popular game Take it Easy! but is bigger and more interesting. It's a game of strategic tile placement, and everyone has the same chances but must make brutal and interesting decisions throughout. Working well with one to six players, this game has features of Bingo, puzzles, and tile laying games but manages to squeeze them into a very intriguing game, which will cause delight or horror in players, as the final tiles are called out.

In the main version of the game, players each take the Nexus Board, which is a hexagon shaped grid of smaller hexagons with four hexagons per side. Players also receive a smaller board called the ScrapYard, with seven hexes total. Players take a pile of sixty-four tiles - one player placing theirs face down, the rest facing them in organized piles. Each of the tiles shows three pipes crossing it - each with a number and color. There are twelve numbers - four different numbers for each of the three directions the pipes run - and there is one tile for every combination. Some of the tiles also have "40" or "80" bonus numbers on their middles. Finally, half of the tiles have a "sun" on them, and the other half has a "moon" on them.

Each turn, the "caller' (player who has placed his tiles face down) reveals one of their tiles randomly and announces the three numbers on it. Each other player finds the exact same tile, and all players simultaneously place it on their Nexus or ScrapYard boards. Players must always place tiles so that the numbers are upright but can otherwise place them wherever they want. Tiles can never be moved, and players are attempting to connect pipes of the same number from one side of the hex to the other. Once forty-four of the tiles have been placed, filling up both boards, the game ends; and players score the boards.

The Nexus board is scored thusly. Each player scores points for each row in each of the three directions that has pipes of continuous color from one side to the other. These scoring rows award points equal to the number of tiles times the number on the pipe. (Five "9" tiles award forty-five points). Players also score points for each bonus tile which is in three complete scoring rows. If only two scoring rows go through a bonus tile, it scores half points, and no points if one or none scoring rows go through the bonus tile. Players also score points for their longest Sunray or Moonbeam (tiles that have the same symbol on them), scoring ten points per tile. Finally, players must evaluate the ScrapYard - the same way as they do the main board, except only the three highest scoring rows are evaluated. However, a player scores no points for the ScrapYard, but they will lose 60 points from their entire total if they do not have a final score of sixty points in the Scrapyard. All players' scores are then compared, and the player with the highest score is the winner!

Players can alternatively use the Orchid board side. When this side is used, players only use either the Sun tiles or the Moon tiles. The game is played very similar, except that players have three tiles that they can set aside and use at the end of the game in three specially marked spaces to enhance their score.

1.) Components: The boards and tiles are very nicely done; and the pipes on the tiles, although differentiated by number, are also very easy to tell apart using color, making the game a bit of a visual treat when finished. A plastic insert is included with the game but is too snug to hold the tiles easily - I had to really jam them to get them into place - and finally decided that this wasn't worth it and instead will use plastic bags. The box is a rather large square one, and everything has a nice - if abstract- design.

2.) Rules: If you look at the rules, you'll see that they're basically extremely simple - the majority of the fifteen page rulebook is spent covering how to score - with a full example for illustration purposes. Really, the full illustrations helped clarify any questions we might have had and were very useful to show to new players for both versions of the game. Teaching the game to others was fairly simple, as long as I could actively show them how scores were calculated. Actual gameplay itself was fairly intuitive.

3.) Numbers: There's really no way to tell at any point who is winning. Players are usually concentrating on their own board, and unless they have calculators for brains, will only have a basic idea how well they are doing. At the end, players can gather quite a few points, and it may take a bit to score. Great for teaching math; bad for those who hate addition.

4.) Puzzle: We spent some time to see if you could get a "perfect" setup with every row scoring, and it is possible. It wasn't extremely easy, but doable; so I'm certain there are hundreds of solutions. However, players must place the tiles down in the order they are drawn; and once it is placed, a tile can never be moved. This changes the dynamics from a puzzle to a game, as players must seek the best spot to place their tiles without knowing what is coming in the future. That doesn't mean that players are completely clueless, they can see which tiles haven't been played yet and guess which ones have the greatest chance of being drawn. Near the end of the game, as the amount of spaces for tiles grows smaller, you can hear people groan and moan as they are forced to mess up scoring rows with the tiles drawn. Occasionally you'll hear an excited cheer, as the tile drawn is exactly what someone needs; but it's working with bad tiles more often than not.

5.) JunkYard: And that's the focus of the game - just where do you put your bad tiles? The JunkYard is a fascinating part of the game, as it lets you "throw away" several tiles. But even then, players can't ignore it, as losing sixty points can easily be the difference between first and second place. Players who get too caught up in the JunkYard will find that perhaps they've lost no points there; but they've wasted good tiles, and left themselves with fewer options at the end of the game. In the beginning of the game, I'm tempted to place several tiles in the JunkYard but always regret it near the end!

6.) Interaction: There really isn't any in this game, as players are seeking to fill their own board. I suppose you could play your tile in the exact same spot as another player, but eventually you'll diverge; and the better player will win. At the same time, this lack of interaction allows a person to play the game in solitaire mode, simply seeking to score the highest possible total with the tiles they draw.

7.) Choices and Fun Factor: The enjoyable part of the game is also the most agonizing part of the game - deciding which tiles to place where. At first decisions are easy, but they get harder as you go. Eventually players will be forced to ruin rows on their board, and deciding which ones to mess up, and which to attempt to complete can sometimes make one's head spin. The bonus tiles can also be lucrative but force the scoring of lower point rows - and is that worth messing up a "12" or "11" point row? The Sun and Moon beams are also something to take into consideration, and it gives a player a bit of satisfaction to see how many rows they can complete. Even people who don't normally like puzzles often enjoy the game; because laying down each individual piece is simple, and players can mess up in certain spots and still possibly win the game.

8.) Orchid: The Orchid board is a nice change of pace from the basic game (Nexus board), and I enjoy both of them; but I like the Nexus board better, if only because it has more options and uses all of the tiles. The rulebook also includes a few variants - all of which have to do with the ScrapYard, and some of them rather fascinating. Really, this is a lot of game in one box, and the replayability is quite high.

When I first looked at Take it to the Limit!, I wasn't sure if I would enjoy it, but I have to say that I was thrilled with my playings. It took some puzzle-solving skills that I enjoy using and allowed them to be completed in the course of a game that anyone can enjoy. Visually very stimulating, this game combines math, logic, and a bit of hope together in an entertaining package. While its abstract nature won't appeal to everyone, the ease of play hides a great, impressive strategy game - one that works just as well with one person as it does with six.


BoardGameGeek entry for Take it to the Limit