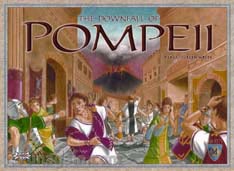 To make a game on a recent disaster would be unthinkable - in fact, I've refused to review one such game that made light of recent world events. The main reason for that is that these events are fresh in our minds, and to make light of them with a game seems cruel and uncaring. Oddly, events almost two thousand years old aren't quite as offensive - thus the game The Downfall of Pompeii (Mayfair Games, 2006 - Klaus Jurgen Wrede). Based on the eruption of Mount Vesuvius and consequent destruction of the city of Pompeii in 79 AD, it takes an ancient tragedy and turns it into a fun, humorous game.

Putting aside the question of whether or not the theme is offensive (the vast majority seem to not care), Pompeii is an extremely fun game. Yes, there is certainly luck laced throughout the game and certainly a high interaction factor, but it's fast and fun; and everyone I've played with gets a big kick out of throwing their opponents pieces into the volcano. There may be some odd logical problems with the theme, but the looming volcano on the board helps bring the game to life; and it is well suited as an enjoyable "filler" game, one that will most likely attract many people - even those not normally known as "gamers."

A board representing the town of Pompeii is placed on the board, divided into a grid of squares, having seven gates around the city where players can escape. There are eleven numbered buildings in four different colors and several other "neutral" buildings scattered around the city, each with circular spaces for one to seven people in them. Each player takes a number of pieces that represent people (number determined by the amount of players) in their color, and a plastic volcano piece is placed on one side of the city. A deck of cards is prepared for the first phase of the game acckrding to specifications in the rulebook, with each player given four cards as their starting hand. The player next to the dealer takes the first turn, and then play passes clockwise around the table.

On a player's turn, they simply play one of the cards in their hand, which matches the color and number of one of the buildings on the board. The player then places one of their people into one of the open circles in the building. They then draw a card, and the next player takes their turn.0 This continues until one player draws the A.D 79 card. At this point, two new rules take effect. If a player draws an "Omen" card, they must immediately discard it and take any other players' person from the board and throw them into the volcano, drawing a replacement card. The other new rule is known as "relatives". When a player places a person in a building, they may place extra people onto the board equal to the number of people already in that building. These extra people may be placed in the same building, in a numbered building of the same color, or any of the neutral buildings. If players play a card that matches a building that is already full, then the card acts as a "wild" card but does not trigger any relatives. Again, play continues until the second A.D. 79 card is drawn, at which point the volcano erupts!

At this point, all players discard their cards and get rid of any extra people they still have in front of them. To represent the hava, a bag of tiles is brought out - filled with square tiles of lava - each with one of six different symbols on it (scroll, vase, helmet, mask, coin, and column). The player to the left of the triggering player draws a tile and places it gn the square on the board that matches that symbol, and then passes the bag to the player on their left. This continues until six tiles are placed on the board. If a player draws a tile that has already been placed, then the new tile is placed adjacent to one of the tiles with the same symbol. Any people who happen to be in the square where lava tiles are placed are thrown into the volcano. After six tiles are placed, the player to the left of the last person to place begins the second phase of the game.

In this phase, a player must first draw a lava tile and place it according to the rules above then move two of their game pieces. When placing the lava tile, if it surrounds game pieces so that they can no longer make it to any of the seven gates, they are removed and thrown into the volcano. When moving, the player moves two different pieces. Each piece may move one square for each of the total pieces that are in the same square as it begins in. Players can move through any square, attempting to get their pieces to one of the gates. If a player gets a person out of the city gates, they place the piece in front of them. If a player only has one piece or has a piece alone in a spot, they may move it twice instead of two different pieces.

1.) Components: I have the original Amigo version of the game and was pleased to see that they replaced the thin paper-stock volcano with a plastic one that really fits well into a large hole in the board (it does feel odd to punch out a large circle from the board and throw it away). The volcano is certainly the centerpiece of the game - and looks good on the board - which has some very nice artwork that gives an arial view of the city. As the lava tiles are pulled from the red cloth bag, it really does look like lava is crazily running all throughout the city. The cards are very high quality, and the cards for different building match in color, number, and picture, helping to easily differentiate them. The player pieces are small octagonal cylinders - which I suppose is better than cubes - that make a satisfying noise when thrown into the tower. Everything fits inside a nice plastic insert in a medium sized box - with good artwork helping evoke the time period.

2.) Rules: I remember when I first got the original game and downloaded the translation off the internet how confusing the setup of the deck was - especially since there was only one A.D. 79 card which had to be reshuffled in at one point. The new rules, which are on eight full color pages with lots of examples and pictures, are much easier to understand - and are actually quite clear. The game itself is extremely easy to teach, which is why I rate it highly as a "gateway" game - a game that allows people who have played very few games to get involved quickly and easily. Teenagers and even younger children should have no problem - making this an excellent family game.

3.) Strategy: At first, it seems a bit haphazard as to where one places their people - you are somewhat constricted by the cards in your hand, and who really knows where the lava is going to come from. It's good to be in populated areas of the city, because everyone is going to work together to rescue their people. In the second half of the first phase, it seems like the obvious choice would be to place people in such a way that would allow you to place the most relatives. After all, the person with the most people in the city has the most people who might escape, right? This sounds accurate, but usually doesn't work for two reasons. One - the player with the most people in the city is often targeted by others when placing the lava tiles, and two - the fact that ties are broken by the player with the fewest people in the volcano. So perhaps the best place to put people is in buildings that are situated near the gates. Doing so gives you only a few people, so is that worth it, though?

4.) Family: Okay, the above paragraph really doesn't talk up the massive strategy in the game, because there really isn't any. It's all about the laughing, the pleading to put the lava tile on someone else's people, and the general having a good time. This is one of the few games that I'm actually surprised at the limit of only four players, as it seems as if it would be a wonderful game for six people. The game has two distinct halves, and the first is merely a setup for the hilarious and enjoyable second half.

5.) Fun Factor: The game isn't meant to be taken seriously, and the theme is far enough removed to feel abstract and silly. I've seen negative comments on the internet, in which players criticized the randomness of the game. I will certainly grant the random factor, but the game is at its best as simply a fun, enjoyable game played for laughs and the fellowship. It's a game in which a lot of talking occurs, as players attempt to convince people where to place the lava tiles and outrun them. There certainly is a sense of urgency as you attempt to get your little wooden cylinders out of the city before they are thrown screaming into the volcano.

Pompeii isn't going to achieve the stardom of Wrede's best-known game, Carcassonne; but it is one that families in particular should check out. I'm constantly surprised at the good reception the game receives, and it is one of my most requested games. Perhaps it is the act of throwing pieces into a fake volcano - perhaps it is the simplicity and quickness of gameplay. I prefer to think it's because the game is fun.


BoardGameGeek entry for The Downfall of Pompeii