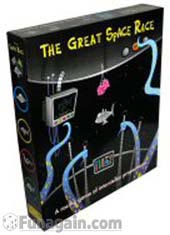 When I first received The Great Space Race (Kenzer and Co., 2006 - Craig Zipse), I received the caution that it was an "American-style" game, rather than the "Eurogames" I often play. "Well, hooray", 'sez I; because every once in a while, I want to play a game that I can just soak up the theme. I've made the statement before, and I still stand by it, that there aren't enough science fiction (especially space) games being produced, so every one that is warrants my immediate attention.

The Great Space Race sounds like a cheesy name and theme - and perhaps it is, but it's also one of the best games I've played in 2006 and is certainly one of my favorite racing games ever. Basically, players are flying space ships around a track, while dropping mines behind them, firing weapons, and basically attempting to outmaneuver each other. It reminded me tremendously of Super Mario Kart as a board game - only the theme is space - and the theme works superbly. Every game I've played has come out differently, and it's one of the few games I've played that was so fun that people insisted on playing it yet again directly afterward.

A large board is placed on the table, with an oval track made up of a grid of hexagons (don't start with me on how space ships are three dimensional, etc. - just accept the limitations of the board!). Players take one of eight control consoles that match one of the eight different space ships available and place control counters on it, setting their shields to "10", their hull to "6", and their speed at "1". Players also take mines and command decision counters - number depending on the amount of players. Each console also shows a special ability for that particular space ship, two bays, and five action slots. Piles of counters are placed near the board, as well as three decks - Action, Major Event, and Equipment. Players place their space ships on the starting numbers on the track, and the first turn is ready to begin.

Each turn begins with initiative counters equal to the number of players being shuffled and each player drawing one, letting them know their turn order. Players then increase their shields by two if they are below ten. Starting with the second turn, players then can either increase their speed by one or decrease it by up to two. Players draw a certain amount of cards from the action pile - three to five, depending on their current speed. Each player who draws one or more events must play each of them - in initiative order, and draw cards to replace them. If a player plays a "Major Event" event card, they must draw the top card from the Major event pile and play it immediately.

The reveal phase then occurs, which is the heart of the game - made up of five rounds, one for each slot. Players reveal the cards in slot one and resolve them in initiative order, then slot two, etc. If a player has no card in a specific slot, then they do nothing that round. There are two types of cards that can be played in this round, maintenance and movement. Maintenance cards either allow a player to recharge their shields back to ten, refill their mines to maximum, or draw the top equipment card and place it one of their two bays (players may discard an equipment card instead of drawing one). Different equipment cards include:
- Atomic Device: Can be dropped like a mine, but causes a massive explosion shown by a template.
- Plasma Shields: Give a player five temporary extra shields above maximum.
- Dumb Fire Missiles: Give a player three missiles that they can file at a player, doing 1D6 damage.
- Dual Processors: Allow a player to draw an extra card each turn.
- Mine Launcher: Allows a player to launch mines three spaces away from their ship.

When a player moves into a space containing a mine, a ship, or some other obstacle, they must roll for impact on a chart, which takes into account the speed of the ship. These possible collisions can reduce the speed of the ship(s) involved and cause damage to shields; which if are reduced, cause damage to go the hull directly. Ships can also hit the boundary of the racetrack (I guess there are walls in space) for damage. If a ship ever loses its last hull point, it is destroyed and explodes - just like an atomic device.

Players can use a command decision to do one of four things: automatically miss a collision, take all their cards back into their hand, change heading one hex, or draw three extra cards during the draw phase. Players must use these wisely, as they only have a specific amount during the game.

Players are out of the game if their ship explodes, otherwise the first ship to cross the finish line after three laps (or fewer laps in a shorter game) is the winner!

1.) Components: While not as stellar as some companies, Kenzer and Co. has done a good job with The Great Space Race, most notably on the large sturdy box and thick, glossy board. Everything screams "space", from the silly artwork to the design of the board, box, and cards. The cards themselves are of fair quality, although their black backs and sharp corners will cause them to get knicked rather quickly. The ships are plastic pieces of different colors - although I had to glue three of mine back onto their bases after they broke. The counters, which are sadly one sided, are varied and useful and very easy to tell what they are. The board looks pretty neat on the second lap of most races, as there are dozens of mines waiting for the players coming through. Everything is in bright colors against a stark black backdrop, and everything fits nicely in the box, although plastic bags are a MUST.

2.) Rulebook: The rulebook is rather nice, as it explains in its fifteen pages the rules in a very clear (sometimes sarcastic) fashion. There are going to be questions about specific equipment, ship abilities, and event cards, and all of it is answered with diagrams, pictures, and examples. Not once did we have any problems, and I was ready to play after only a single reading of the rules. The game is easy to play; I simply show some examples of movement - perhaps the trickiest part of the game, and people quickly understand how to play. How to avoid asteroids is a different matter, and not everyone gets that! ïŠ

3.) Events: The event cards really spice the game up, providing a bunch of random things to keep the game interesting. Some folk may not like them, stating that they add too much luck to a fairly luckless game, but I think they help keep leaders in check. Often a player will pull ahead of the crowd and get what might seem an insurmountable lead. Event cards are usually played on these players, and slow them down slightly, perhaps giving the other players a chance to catch up. The Major events themselves are amazingly interesting - sometimes causing a black hole to appear on the board, a giant space amoeba that randomly moves around eating ships, or a noxious green gas cloud (oh, yeah, and Spaaaaace Goatsssss!). These add a lot of fun and make each game unique and interesting.

4.) Robo Rally: Because of events, mines, and programmed movement, people often compare this game to another one - Robo Rally. The similarities are there, for sure, but you know - I think I like this one better. Robo Rally is very logical and appeals to my mathematical enjoyment but is incredibly unforgiving. In the Great Space Race players can use command decision counters to miss obstacles, have choices like facing changes on their movement cards, and basically give a little leeway to maneuver each round. If you like Robo Rally, you'll probably like this game; if you hate Robo Rally, this is similar, but I think you might enjoy the changes.

5.) Time and Players: So far, I would suggest that the game is best played with four to six players - much more interaction that way, and with only two laps instead of three. The game says it's only an hour of playing, but I've found that it's more like thirty minutes per lap. The game is hilariously fun, however, and I've never felt like the game was dragging. Since much of the game occurs simultaneously, players will rarely feel bored - there's always something to do.

6.) Strategy: Yes, there is luck involved in the cards drawn and events played. But knowing which movement card to play is critical; and while it initially seems like going at the fastest speed possible is worth it, it's often best to pull back from speed five. When we played our first game, and a player hit a mine, taking only three damage, he laughed and said that mines were worthless. After dying to the fifteenth mine he hit, we all realized that while mines seemed trivial, they were actually quite deadly in groups. Knowing when to ram another ship is also important; because while it is more disadvantageous to the ship being rammed, it's still risky and possibly deadly.

7.) Fun Factor and Interaction: The game is fun because of the high level of interaction. Laying down mines for others to hit, shooting missiles at them, playing event cards on them, ramming them - this is stuff that is downright fun, and everyone laughed and had a great time. The game has a slight drawback in that there is player elimination in it, but this rarely happens unless a player gets too careless or foolhardy. We usually ended a race after the second person was destroyed, giving the game to the leader. And one race did end with only one person surviving to claim victory!

8.) Variety: With eight ships (all which have fairly equal powers, by the way), tons of movement, event, and equipment cards each game feels different. Players can customize their ship to a degree, and the game is almost begging for expansions. When I played, players wanted to play on new tracks, with new equipment, etc. I'm hoping that Kenzer and Co. releases some more stuff for us later on down the road.

The Great Space Race is a game that combines several good mechanics from other games together to make a fast, interactive, racing game - one that is simply a lot of fun for those playing. It's the kind of game that is all about the experience, and players will be talking for days about the great crash that occurred in the race, or how Johnny was sucked into the black hole. If you like space and racing, this is a thrilling combination; and I look forward to playing it again soon.