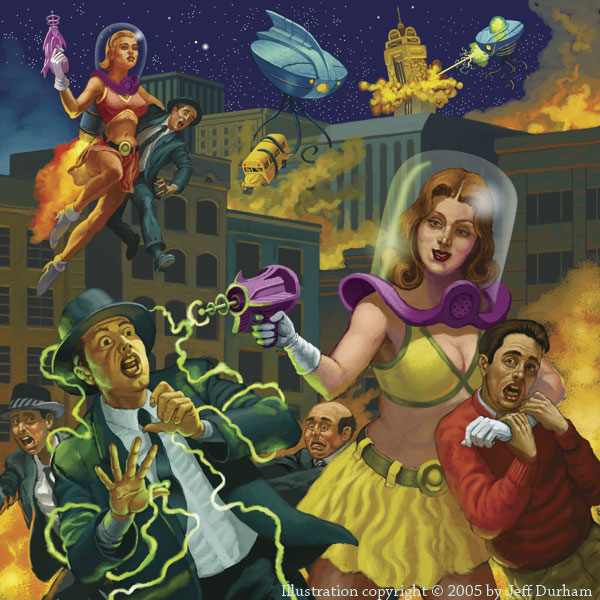 Venus Needs Men! (Synelix Games, 2006 - John L. Velonis) sounds like the name of a really bad "B" movie, and the artwork on the box cover does nothing to dissuade one from that. But I'm always on the lookout for games in the space genre; and therefore, it wasn't hard to tempt me into a playing of the game. And I liked it, not despite the theme but because of it. The ideas were silly and humorous, yet the mechanics offered enough choices to make this more than just a simple, light game.

Each player controls aliens who are attempting to capture or eliminate a good portion of Earth's population - Venus is looking for slaves, Mars for brains, Ganymede for food, Titan for parasitic hosts, and Pluto for targets. Using a cards and dice, players manipulate their spaceships around, attempting to take large chunks of the Earth's population. The game has a basic and "enhanced" game; and while I find the basic game a bit mundane for my tastes, the enhanced game is an enjoyable romp of semi-role playing and light tactics.

I'll go over the enhanced rules, since they are only a small step up from the basic rules. As I said up above, each player chooses one of the five races attacking Earth thanks to a defense system being disabled. Alternatively, a player can play as Earth, attempting to rescue players rather than players taking spaceships of their colors (four through six, depending on race), and placing two on their home planet. The planets are connected via dotted lines to either space regions (numbered "1" through "10") or orbit around the earth. Earth itself is divided into eight land regions - each with a number of population chips on them. These land regions are connected via dotted lines to each other and to five different water regions. A deck of "Zap" cards is shuffled and evenly split between players, giving them a deck which they draw three from. Another deck of Technology Upgrade cards is shuffled with three placed face up next to the board. Players place the three Technology cards and one Special card specific to their race in front of them, and the game is ready to begin, starting with Pluto, if possible.

On a players turn they fill up their hand up to three Zap cards and then take one of the following actions:
- Build a spaceship. The player may take one of their reserve spaceships and place it on their home world. (Ganymede can build two; Earth can build them on land territories)
- Move action. The player can move each of their spaceships to one adjacent area, following the dotted lines, or going from Orbit to any land area on earth. (Titan can move two spaces, Earth ships cannot move into deep space, Pluto can warp to a random space zone, and Ganymede can use all movement for one ship.)
- Attack. The player can attack a spaceship in the same section, or any ship on earth from orbit, or any ship in an adjacent earth territory. A player rolls the number of dice listed on their weapon card, with some of the races having special abilities. If a ship is hit, it is removed from the board, although Pluto's ships need to be hit twice.
- Population. The player can collect one population chip with each of their ships in a land area that contains population chips. Pluto can collect (destroy) them from orbit; Ganymede can collect them from adjacent oceans, and Titan can infect them with parasites. There is a limited amount of chips on the board; when they're gone, they are not replaced.
- Research action. The player must discard one of the face-up Tech cards and replace it with the top one from the deck. They then choose one of the face-up cards that they would like to obtain and roll one ten-sided die to match or exceed the Upgrade number on the card. If they do so, they may take the card, acquiring any upgrade or special abilities it adds.

A player can play Zap cards at any time and use them for a variety of special effects, to help themselves and hinder the other players. However, a player can also discard up to three Zap cards on their turn, using each discard to add to the action they already took (for example they can move one ship one extra space). Once a player runs out of Zap cards, they can play no more; so players must use them with care.

The game continues until one player captures a plurality of the population on Earth wins the game immediately. The Basic game is similar to the enhanced game, but has no Technology, and fewer differences between the races.

1.) Components: I'm fairly satisfied with the components, but I did have a few problems. The biggest problem was that every single card in the game has the same back, which makes them extremely difficult to sort and keep separate. I did like the look of the cards, which are black and white, with some silly, retro artwork. The ships are generic plastic ships in different colors; and a few ten- sided dice are included with the game, as well as a pile of chips for population. These small poker chips are decent, although they don't stack too well. The board is very well done and includes great artwork as well as very clear territory delineations. Everything fits into a sturdy box, and the entire game has a very retro feel about it.

2.) Rules: The rulebook is only four pages long and is actually only decent. For one thing, you have to really read carefully to see the differences between the Enhanced and Basic game; it should have been formatted better to more easily distinguish which rules applied to which game. Also, the rules are in a bit of a whacky order, and I found myself perusing around several times - almost missing critical rules because they are only mentioned quickly once. Still, once I taught the game to others, I found it very easy going; and most players caught on quickly. The cards are rather helpful to remind players what their special abilities are, and a nice card is included for each player that gives them a short description of the abilities of the other aliens. Teenagers had no problem with the game; and while I would have preferred longer, clearer rules, it wasn't hard to understand.

3.) Races: At first, you may assume that every race is more powerful than the one you are playing. Some of the races do seem overpowered, but I've seen them all have good results (except Earth - perhaps that one needs to go to an experienced player?) Each of them has just a bit of flair - such as Mars stealing other player's ships, or Venus with their extremely unpredictable gun, or Titan attempting to infect the entire earth population. Players tend to get into character, which is almost essential for a game such as this, and use the special abilities of the races to best win the game. This is another reason why I'm a fan of the enhanced game, as it allows the races to have larger differences, giving the game more flavor.

4.) Zap: The Zap cards are an interesting beast, as they can be used either for their text or to extend one's turn. In the games that I've played I've seen them used about equally for both purposes. The cards are NOT balanced, as some of them are certainly more powerful than others, but none of them are game-breakers either. They add a bit of chaos to the game that isn't there otherwise; yet I enjoy using them, not simply because they increase the interaction, but because give the players one more choice to make when deciding what to do on their turn.

5.) Strategy: Obviously, a player's main goal is to simply fly to Earth and start collecting as many people as they can, since that is the ultimate goal of the game. Yet with technology and racial abilities, some players have a slight advantage here; and since not all land areas are created equal, a player with a ship in China has a much bigger pool of people to collect from than say, one in Australia. The counter to this is the ship-to-ship combat in the game. Some players may get caught up in the combat, which is admittedly fun; but if you can destroy a couple of your opponent's ships at the right time, you can cause a major setback to them, since it takes time to rebuild ships and send them back down to earth.

6.) Diplomacy: I'm not a huge fan of multi-player war games, as players often tend to get ganged up on, but it works fairly smoothly in Venus Needs Men! Players can point out who is winning and adjust their strategies accordingly, but an all out offensive on one player is difficult and is often a waste of players' times. No trading is allowed, so very few deals are made other than "Let's all attack Pluto's ships this turn, since they are so far ahead!"

7.) Fun Factor and Luck: Any game that uses ten-sided dice for combat will certainly have a decent amount of luck in it. Combat is quick, simple; and some races do quite a bit better at it. However, since collecting population is NOT random, the game rises above the rolling of the dice and playing of the Zap cards. Venus Needs Men! is fun because of its theme and interesting gameplay. It's fun to try and get new technology to enhance your race. It's fun to destroy your opponent's ships or use a Zap card at the right time!

8.) Time: One can adjust the time needed to play the game by adjusting the starting population markers in each country. This is a VERY effective way to increase / decrease playing time (although I found that the starting number seems to be the best and easiest) and usually causes the game to last just about an hour, which is perfect for this type of game.

I'm not sure that Venus Needs Men! will win any strategy game awards for an elegant play style. Yet despite a few rule and components problems, I enjoy the game tremendously. Part of that is certainly due to the theme, which is humorous and enjoyable; but I like how the game allows one action per turn, as it keeps the game moving quickly and smoothly. It's an hour game that allows some strategy, as players decide whether to build, move, fight, or capture humans. Venus Needs Men! has just enough variety to keep it interesting, with enough tactics to keep it from being just another pretty game.


You can buy this game directly from their website.