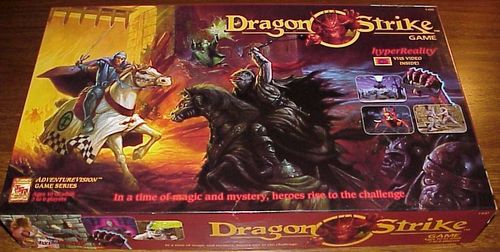 Dragon Strike is a game from TSR that was released in 1993. It included a very cheesy VHS tape and a bunch of miniatures. Clearly designed to do battle with the HeroQuest games this one never took off.
On its own it's not a terrible game but there was so much better stuff on the market when this clunker was released. Believe it or not, I have a copy. I thought I might have sold it on eBay a while back but I found it this past weekend in my game collection. When my daughter and her friend were bored (and my wife was away) I decided to spring it on them!
We started by watching the old VHS tape filmed in "HyperReality" and then went on to try out one of the adventures in the box. I found a copy of the video on YouTube so feel free to waste 30 minutes of your life that you will never get back. I actually wasted an hour because I watched this video 15 years ago when it was new...
The girls did not know how to take the horrible nature of the video. They were born in a time where green-screening means high quality. Not so for this video. By the way, the guy who plays the evil wizard, does he not remind you of Data from Star Trek?
I never played this game before. When I purchased it I was already in the US Army and we either played the real RPG games or we drank beer, sometimes both at the same time. Suffice to say we did laugh our asses off watching the video but we never felt the need to play the game. 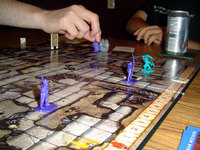 At one time I thought about painting all the miniatures in the box but they are of a low quality and done in plastic. None of the features are crisp enough to paint. Who knows, if I get bored enough (and the girls like the game system) I might break down and paint them.
I ran one of the easy missions for the girls and they had fun. They did not complete the mission as the dragon showed up and they ran away like scared little schoolgirls with their... wait a minute... they are little schoolgirls! They wanted to keep going but my wife arrived home so we cleaned the game up and went about our business.
Later that evening my daughter began pestering me to teach her how to become a Dragon Master so she could run the games. Knowing my daughter has a bad habit of cheating when things don't go her way I was a bit on the leery side of this idea. I offered to help her run the game for friends and we formed an uneasy truce. She was jonesing for access to the adventure book but I wanted to run her and her friends through a few more missions before I hand the reins over to her.
See, I want to be sure everyone involved plays a few correct games before they try playing under my daughter. She is far to prone to ignoring rules or making things up that benefit her. She's still young so what can you do?
The game is not an RPG by any stretch of the imagination but it does set the groundwork for getting kids into the Dungeons and Dragons game. Only three dice are used in the game and almost everything only does one hit point of damage. There are no campaign rules so each adventure has the characters start fresh with no accumulated gear or experience.
The game does make a good entry point for young gamers and everything you need is in the box. You can probably find it for a steal on eBay!
BoardGameGeek entry for Dragon Strike