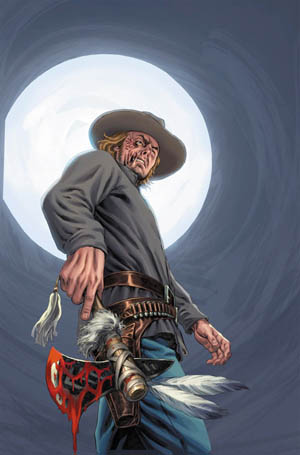 Next Tuesday Red Dead Redemption hits stores. In the game you play as John Marston, a reformed outlaw making his way in the old west. what better way to get in the mood than by spending some time with Jonah Hex?

Jonah Hex is a character that originated in the 1970's from DC comics. Created by John Albano and Tony DeZuniga, Jonah Hex is a scarred cowboy who lives by his own code to protect the innocent. As a gunslinger none are better than he is. The parallels to the story of John Marston are many.

Both Hex and Marston tried to leave their pasts behind them by and become ranchers. Both married and had sons. In the end Jonah Hex died a grandfather, gunned down while cleaning his glasses. Marston? It's up to you to keep Marston alive in your game.

The collected stories of Jonah hex are available in trades by DC or you can search out the original comics.